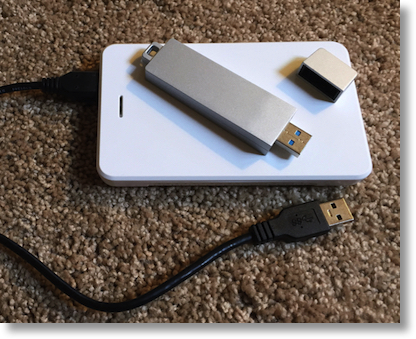 Whether you have a diminutive ultrabook like a Macbook Air with a tiny SSD or a beefy desktop with a giant drive in it, you still want more storage. You know how it is, the more space you have the more you need, right? I think it’s like with houses, if you have 4 bedrooms and only two people, you’ll manage to fill up every room in the house. I believe it stems back to our inherent laziness that if it’s harder to keep things tidy than it is to be sloppy then we revert to our slovenly instincts. Ok, two of you out there are saying, “Not ME!” but I’m betting I speak to the rest of you. Personally I bought a 1TB SSD in my recent MacBook Pro but somehow I only have 140GB free on it!

In the old days (which were about 15 minutes ago by my watch) we used external USB drives mostly for backup because it just wasn’t fast enough to keep our live data externally. USB 1 transferred data at 12 Mbit/sec. USB 2 brought us a 40X speed increase up to 480 Mbit/sec but that still wasn’t fast enough. The speed problems were exacerbated by the use of spinning drives because SSDs were still so expensive. Today’s computers now sport the shiny new USB 3 ports at 5Gbit/sec, and SSDs have plummeted in price so it might just be worth while to use external storage for real time use.

I know I mentioned this in our Google Plus community back in March but I’m not sure I told you on the podcast that I bought a 1TB SSD from OWC and put it in a USB 3 enclosure. I didn’t have an immediate need for it, but the price was too good to pass up. The model I bought was a Crucial 6Gb/s SSD for $349, plus a USB 3 enclosure made by OWC themselves for another $22. They don’t seem to be selling exactly this model any longer, but they do have the Mercury Electra but it’s running $458 right now.

That drive is awesome and fast, but that’s not exactly what I wanted to tell you about today. The fine folks over at OWC (also known as MacSales) gave me their new Envoy Pro Mini SSD to test. This stands out as a whole different beast because it’s in the form factor of a thumb drive. Maybe a BIG thumb drive but still very small.

There’s a great free application in the Mac App Store called Blackmagic Speed Test (from Blackmagic Design) that I decided to use for my tests. To refresh your memory, the Envoy Pro Mini is advertised at 433MB/s sustained transfer speeds but when I ran Blackmagic on the drive I only got around 155MB/s write and 210MB/s read. In contrast, the external SSD from OWC ran at 375MB/s both read and write. Both devices were tested using the standard 5GB file stress test that Blackmagic recommends to get the most technically accurate tests. 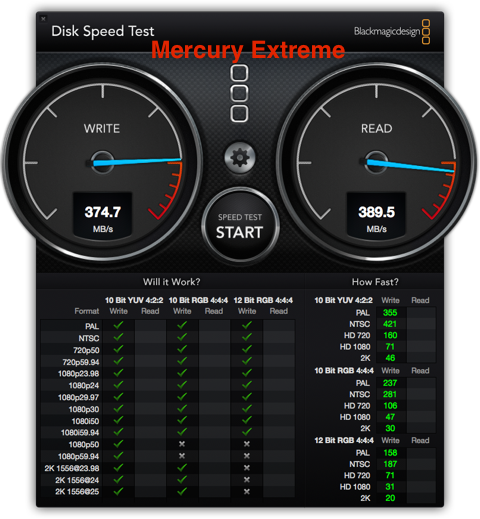 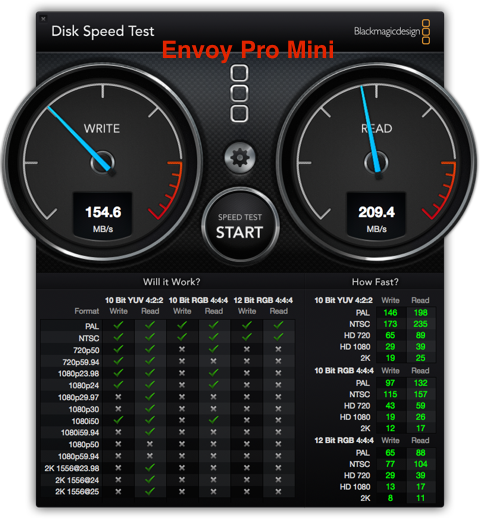 I thought maybe I should double check the results from Blackmagic by watching the disk transfer speeds using iStat menus. I dragged a 4.7GB movie file over to the Envoy Pro Mini and
I was able to replicate the results, seeing 155MB/second write speed. This got me curious. OWC is a company with a great reputation and I’ve personally depended on them over the years so why would my test results be so very different from what they promised?

It turns out to be very much in the eye of the beholder and what is considered “normal usage”. When I wrote to OWC asking about the vast difference in speed between the SSD in the external enclosure that I had bought from them vs. the Envoy Pro Mini. They explained:

The type of files you are using will result in different levels of performance. Unless a drive is being specifically used for video editing, a more true to real life test would be something like QuickBench, that uses compressible data. We use that test bench for the benchmarking listed on the product page, as the vast majority of end users and customers likely to purchase an Envoy Pro mini will be working with compressible data files, and test benches such as Quickbench paint a more realistic picture of the performance they are likely to see.

At first I thought this was a bit of a dodge and weave, but the more I thought about it, the more it made sense. Blackmagic Speedtest is written by a company who sells video gear, and whose customers are primarily interested in testing drives to see if they can read and write video as it is captured. In fact, if you look at the speed test screenshots I put in the shownotes, you’ll see that they show you little green checkmarks indicating what type of video you could read and write to these disks real time.

Blackmagic’s own documentation backs up what OWC said (with perhaps a down the nose view at those of us who don’t write video real time):

Some models of SSD cannot save video data at the speed indicated by the manufacturer because the disk uses hidden data compression to reach these higher write speeds. This data compression technique can only save data at the manufacturer’s claimed speed when storing simple files or simple data, such as blank data. Video data includes video noise, and more random pixel data which does not compress much, so the true speed of the disk is seen. 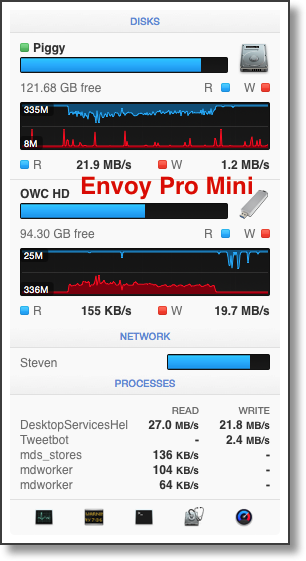 You guys have applauded my efforts in the past to find the real data for myself so I set out to prove their points. I took a look at the Quickbench software that OWC recommends and uses for their speed tests, but it hasn’t been updated in years and in fact shows compatibility only through Mavericks, AND it was $15 so I decided not to shell out my own hard-earned cash on an apparently abandoned piece of software.

Instead I made my own test files to transfer. Here’s the problem though, the speeds we’re talking about here are SO wicked fast that it’s REALLY hard to measure them! I dragged a folder of just text files over the the Envoy Pro Mini and I was not able to bring up iStat Menu before the transfer was done! I then took a folder with an assortment of files from small text files to screenshots to audio files, 73GB total. About 21GB of that was audio files averaging around 500MB each.

This test achieved a peak of 336MB/s which is more than double what I got with the incompressible video files. It’s still not up to the 433MB/s speeds OWC claimed, and it definitely was not a sustained transfer speed. In fact, most of the time (as you can see in the iStat Menu graph in the shownotes) the data was transferring between 150 and 200MB/s. It’s possible that the peak was when all the compressible non-audio files whooshed over to the Envoy Pro Mini, and that the audio files were as incompressible as the video files in the other test.

The bottom line here is that SSDs are getting really inexpensive and very fast and that if you want a super portable way to increase your storage, the Envoy Pro Mini from OWC is a fantastic solution. When I say portable, I have to admit that I couldn’t find the Envoy Pro Mini because I’d accidentally left it in my purse and never even noticed it was in there. $200 for 240GB of extra high speed storage (even at 200MB/s) is a great deal. If you’re looking to record video live to an external device, you’d be better off buying one of their external SSDs to get even faster transfer speeds.