Allister Jenks guest hosts the show this week and talks about his decision process on buying a new iPhone in 2014. Donald Burr reviews two Bluetooth keyboards for his iOS devices. Then Allister reviews the iOS game RGB Express and finally on CCATP talks with Andrew J Clark about all aspects of building a unique and successful iOS app except the coding.

Hi this is Allister Jenks standing in for Allison Sheridan on the NosillaCast Mac Podcast, hosted at Podfeet.com, a technology geek podcast with an EVER so slight Macintosh bias. Today is Sunday November 16, 2014 (in my part of the world) and this is show number 497. On this week’s show I’ll take you through my buying decision for my latest iPhone, Donald Burr reviews a couple of super portable bluetooth keyboards, I’ll give you a quick review of a game that has taken my whole family by storm and then on CCATP we’ll hear from an iOS app developer in Australia about his experience releasing a unique and high quality app.

So, let’s start the show.

Like many Apple aficionados, I watched the Apple announcement of the 2014 iPhone models with wide eyes at the wonderment of a giant iPhone – the iPhone 6 Plus. Would this be a device I would want? 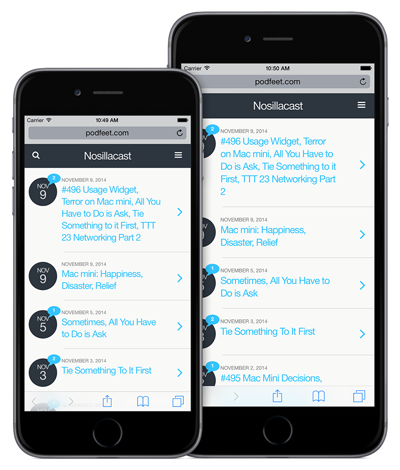 I devoured all the early hands on reviews and watched with bated breath as friends made their decisions and each carefully justified their choice of 6 or 6 Plus. Being in a second wave release country, I had the luxury of watching many friends and public figures get their new phones and experience them before I could even order mine. I think I got a few giggles out of some of the justifications for the 6 Plus, but in the back of my mind, I realised, I was doing the same.

As a then owner of an iPhone 5 – a very capable device – I looked at the choice of new models and my overriding thought was “go big or go home!” Was the iPhone 6, I wondered, enough of an upgrade from the iPhone 5 to justify spending that amount of money? I should point out that I always buy my phones unlocked and without subsidy. So any new model is a lot of money.

I came to the conclusion that a slightly bigger, slightly faster phone (in typical use) wasn’t enough to justify the upgrade. Sure, it had touch ID, which I liked the thought of, and being newer it would remain viable for more years in the future, but it just didn’t seem enough. Apple Pay may come in the future, but there are no announced plans for countries other than the US and, well, our credit card systems aren’t in such dire need of supplanting.

But what if the upgrade brought me a WAY bigger screen? I love my retina iPad mini and it has long now served specific functions that I just cannot comfortably do on a 4” phone. Would a larger iPhone reduce or even remove the need for the iPad? See, there goes that “justification thinking!” And then I thought about that extra battery life. My iPhone 5 was never lasting me until bed time without a bit of a juice up in the afternoon or evening.

I quickly came to the realisation that I would get an iPhone 6 Plus unless I could find a reason not to. And the biggest candidate there was how well it would work in a real world carry situation. Would it fit in my pockets? Would I be able to get it in and out of those pockets? Would the size make it so difficult to handle I would be more likely to drop it? Would I be able to use it one handed?

So I set about answering those questions. The printable templates that circulated were a great help. My brother was trying to make his decision and he printed and pasted both sizes on some art board of appropriate thickness. Yes, the 6 Plus would fit in my pockets, and quite comfortably. Yes, I could easily hold it in one hand. No, I could not easily reach large portions of the screen.

Was this the death knell? I pondered this for days. Until I realised that in real world, on the go, single handed operation of my iPhone 5 – I couldn’t comfortably reach all of the screen either! Not to mention I rarely use it when I only have one hand available. Much of my one handed use was out of convenience rather than necessity.

So, my mind was made up. Or so I thought. Our local carriers had the phones available a week before they were orderable from Apple, so, I thought, I should actually pick one up and hold it. For real. After several attempts at picking a time there would be no crowds, I picked one up in my hand. Except it had a giant security device attached to the back. Argh! But that steeled me. A 6 Plus it would be!

The following day I discussed the purchase with my better half and placed my order. I decided on Space Grey and then I decided on the capacity. Remember – go big or go home! I got the 128GB model. I figured I’d be taking all sorts of cool videos, watching HD movies, and much, much more.
The device arrived way quicker than Apple had lead me to expect and I eagerly got to work setting it up as a new device. And that is how I have come to think of it both in software and hardware – a completely new device. A new software appearance (when adapted for the new models) and new hardware presence in my hand.

So how has it been? The first day or two gave me wrist strains until I learned to stop handling it like a 4” phone. I’ve slowly loaded apps on it – some old favourites but also some new when they support the large screen size well. Much of my iPad use has dropped off, but not all. There are still some things that the physically larger screen is more suitable for. I have yet to charge it any time other than overnight. The lowest I’ve seen the battery is 26%. It fits in my pockets, but it is harder to get in and out. I had to move my FitBit to clip on my other pocket. I’ve not once come close to dropping it although I do tend to have it in an Apple leather case when I’m out of the house and that helps a lot with grip. I still feel a little awkward using it when I’m not sitting down, but I get by. I love the screen – both the clarity and the amount of stuff I can fit on it. In summary, I’m still getting used to this new class of device, but I’m glad I went this way.

The unexpected outcome from all of this is that, despite two years with a 4” iPhone 5 and four years with prior 3.5” models, the 6 Plus seems perfectly “normal” in size to me now, only a month after I got it. Amusingly, when I see the occasional 3.5” device now, it looks positively tiny!

Thanks for that great review Donald. A bit longer than usual but packed full of information. If I was in the market for a Bluetooth keyboard, I think I’d save myself the time and just go with your choice.

Every so often I open up the app store on my iPhone or iPad and just take a look around the home page to see what is being featured. I’ll happily judge a book by its cover and therefore an app by its icon. Anything that looks interesting gets a closer look.

Recently I noticed Apple’s “App of the week” was a game called RGB Express, which has a cute little truck on its colourful icon. I took a look and saw it was a puzzle game about little trucks delivering packages. Crucially, the basic gameplay looked simple, so I downloaded it. It was free as part of Apple’s promotion but is now back to its standard price of $2.99.

The gameplay, as I mentioned, is very simple. In each level you are presented with a map of roadways with one or more trucks and one or more packages to deliver. The packages are coloured and must be delivered to buildings of the same colour. In the beginning all of your trucks are coloured also and these must pick up only packages of matching colour. You must trace out each truck’s route to pick up and deliver the relevant packages, before sending them on their way. The crucial limitation is that each stretch of road may only be used one time, by one truck. 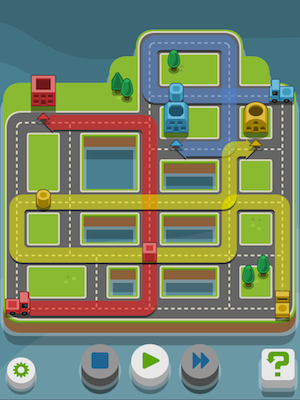 The early levels are very simple and the difficulty builds gradually. Soon enough you start to get extra features coming into play. Trucks that can pick up and deliver any colour package, bridges which raise and lower, and you can choose to have trucks temporarily drop off packages in the roadway for other trucks to pick up.

There is no time limit and there is no penalty for getting it wrong — you just go back and try again. When you are successful you earn coins and these allow you to “pay” to unlock future levels and to “buy” hints. Watch out with the hints because you have a limited number available and if you need more these are only available with an in-app purchase. These range from 99 cents for 3 hints to $5.99 for 50. I’m happy to report I got through over 100 levels before I used up my free hints. As far as unlocking levels goes, I’ve never been short of coins to unlock the next block.

I have played this game a lot, although I do play less often now I’m at the really difficult levels, and yes, I bought some more hints because some of the later levels are fiendishly difficult. One thing that keeps bringing me back to play is that after you complete each block of 10 levels, the first couple of the next block are often a bit easier so you get a bit of progress without having to work quite so hard. When I got the game there were 200 levels but there have been two updates in recent weeks which have brought the total up to 280.

I showed one of my sons the game and he immediately took to it, and now it has spread to his brother and my wife. It is not unusual to hear a cacophony of the cute little music coming from 3 iPhones and an iPad. The app is universal and while it is not optimised for the new iPhone 6 and 6 Plus, the graphics look great on my 6 Plus.

Check out RGB Express in the app store, but please don’t blame me when you can’t put it down.

Andrew and I discuss his iOS app Numerical: Calculator Without Equal.

We cover the origins of the app, the many rewrites and redesigns, how design and function combine, marketing and pricing of the app and dealing with feedback.

That’s going to close us out for this week, so thanks for listening. My name is Allister Jenks and you can follow me online on Twitter @zkarj and you can find all my other online presences at zkarj.me.

Allison will be back in control next week so send in your Dumb Questions, comments and suggestions by emailing Allison at [email protected]. Next week the live show will be back so If you want to join in the fun, head on over to podfeet.com/live next Sunday night at 5pm Pacific Time and join the friendly and enthusiastic NosillaCastaways. Thanks for listening, and stay subscribed.