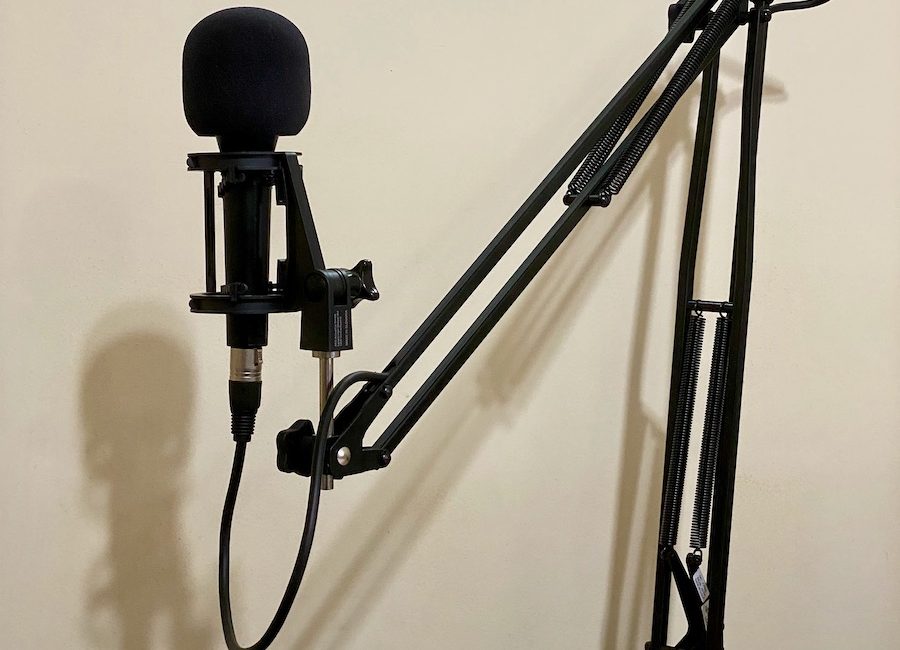 I recently purchased a new desk for my study, which I reviewed in a separate submission. If you heard or read that, you may recall I said my old desk was 1.2 m long and the new one is 1.8 m long. Sitting in the centre of the desk, each end is now 300 mm further away, which isn’t generally a problem except for one thing. A few years ago, I think after Bart did the same, I purchased a desk-mount microphone boom. I bought it off a local auction site for a little over $20, so it wasn’t anything fancy, but it got the job done. The issue it has now is its maximum reach of only 700 mm. When clamped to the end of my new desk, it is 200 mm shy of making it to the centre where I sit! I considered various workarounds, like positioning my computer 200 mm off centre, or clamping it to the front of the desk, 200 mm from the end. Neither of these was satisfactory as they impinged on other uses of the desk space. So, I decided it was time for a new boom.

I did some research and found a local shop which had a couple of options for NZD$169 and $229. Just before Christmas, I popped in and had a chat with a salesperson about them. The more expensive one was an impressive device, but it was more than I really wanted to pay, and I thought the less expensive one wasn’t going to be long enough. I told the salesperson I’d do some more research before committing to any purchase, and at any rate, if I was going to spend $229, then I’d wait a month or two after Christmas.

When I was contemplating writing and recording the review of my new desk, I thought I should once again do my research on microphone booms. One of my searches again brought up the $169 model I mentioned above, at the same retailer, and I took another look. I realised that the maximum reach was 980 mm, which is long enough to do the job, but I was concerned that the product photos showed a microphone mounted upside down on the end. I was unsure if it could be mounted right way up, which is what I need for my dynamic microphone, and particularly if I am using it near maximum horizontal reach and have no means to go high as well.

So, I wanted to take a look at the $229 model again, and when attempting to find this on the retailer’s site, I stumbled across a third product. This one looked very much like my existing arm, but also had a reach of 980 mm! It was the same brand as the more expensive ones, so was a quality item, but the cost was only $119, much more affordable.

The product is called the Gator Frameworks Broadcast Boom Desk Mount Mic Stand. However, the other two had very similar names, so the product code for this one is GFW-MICBCBM1000. It just rolls off the tongue, doesn’t it?

The boom comes with both a desk clamp mount and one you can screw to the surface of the desk. I’m using the clamp which is sturdy and easily attached around the end of the desk, allowing for up to 55 mm thickness. Unlike my prior cheap one, the clamp fits snugly and does not move once firmly attached to the desk, even when the boom is at full extension. The boom is comprised of two sections, the first comprises of three steel tubes in a triangular configuration, and the second has two tubes vertically. These are articulated at the base, central joint, and at the microphone mount and are spring balanced with sturdy and stiff springs which makes lifting the boom slightly easier than lowering it. The stiffness of the springs helps avoid audible vibrations from them – another issue with my prior one. All of these metal parts are finished with a black powder coat, and the microphone mount is a short polished steel rod with a standard 5/8″ thread.

The whole boom swivels smoothly and quietly from the base, through 360 degrees, though a small thumbwheel adjuster can be tightened to resist this rotation. At the centre articulation is another, larger wheel to adjust the resistance at that joint, and the microphone mount can also be similarly restrained with another large wheel to ensure the microphone angle remains fixed. I did find this last one needs to be tightened a lot to prevent the mount shifting its angle. Unrestrained, the mount can be rotated about its vertical axis – critical to fixing the angle of the microphone when fully tightened on the mount thread, and through over 270 degrees around the front-to-rear axis. This latter rotation enables the microphone to be upright, upside down, or somewhere in between. There is no provision for tilting backwards or forwards; however, the shock mount I have has this axis covered. Once the microphone angle is restrained, it will remain consistent throughout the range of motion of the boom, thanks to the way the articulations are configured.

All movements of the boom are smooth and silent, with no noise from the springs unless you actually tweak them directly or fold it back beyond vertical. Folded fully back, slightly past the vertical, the boom rises to approximately 500 mm off the desk and around 150 mm each side of the rotation axis of the desk mount. With the thumbwheels tightened to provide moderate resistance, the whole boom is remarkably stable even at full extension. With the two sections forming a straight line, I can have the microphone mount at the centre of my desk and about 450 mm above the desk. Giving the boom a vertical “tweak” at this point results in a quickly damped movement of only about plus or minus 5 mm. Back to front, it moves a little more, but tightening the wheel on the base would likely reduce this, at the expense of the ease of swinging it out and back.

If this all sounds great, you would be right. I’m very pleased with my purchase. But I have so far failed to mention the best part of this product’s design. It has an integrated XLR cable! For the old boom, I had cable-tied my XLR cable to strategic points, but this took a bit of getting right with slack at the right points and also restricted some movement of the boom. The Gator boom comes with what the box describes as an XLR cable. However, that cable is threaded through the tubular steel of both arms, with around 400 mm protruding at the microphone end and 1.5 m at the base end. It also pops out at the central articulation to allow some slack when changing the relative angles. There’s plenty at the microphone end for any mounting accessory like a shock mount, and as long as your mixer or microphone interface is within 1.5 m of the base, you’re set.

This Gator Frameworks microphone boom is available on Amazon for USD$59.99, but as I mentioned, I bought it from a local retailer, and I encourage you to do so as well. Given recent events, people have been shopping online far more, rather than in person, and so local businesses have suffered a lot. Shopping locally helps your local community. I would probably have bought where I did anyway because they’ve seen me right in the past with excellent knowledge and advice and never pushing for a sale. Most recently I bought the Zoom H1n portable audio recorder there, but there is another purchase that sticks in my mind.

The AKG D88S dynamic microphone mounted on my new boom was purchased from the same shop, along with a small Behringer UB502 mixer and a few accessories in August 2006. Allison and others often compliment my “sound” which is, in large part, down to the fantastic advice I received from the Wellington branch of The Rock Shop over 15 years ago. The only functional part of my setup that has changed in those 15 years is a USB interface (also a Behringer, bought at another local business) that was needed once I bought a Mac with no line in socket.