Steve and I celebrate our 50th birthdays together – so we’re 100! Rose meets Leo and makes him hold up a sign for me, two Time Machine options to edit the scheduling: TimeMachineScheduler from klieme.com and TimeMachineEditor from timesoftware.free.fr. Long awaited Honda Bob interview where you get to learn up close and person how geeky he really is. Hannes’ review of the Macility tools from Ergonis at www.macility.com including PopChar, KeyCue and Typinator. Twitter explanation at http://www.commoncraft.com/Twitter. In Chit Chat Across the Pond, Bart and I discuss our longer term views on Evernote, Bart gets the Logitech LX8 mouse http://www.bartbusschots.ie/blog/?p=756, and RDP gets a questionable beta update http://www.bartbusschots.ie/blog/?p=757. Watch engineers explain cats at youtube.com/watch?v=mHXBL6bzAR4.

I’m working on the correct MacUpdate promo link – sorry it’s not up yet!

Happy Birthday to me! and Steve!
My husband Steve and I turned 100 today – 50 years each! It’s really fun to be able to share your birthday with your best friend and husband. that great Happy Birthday song is courtesy of Craymo, and you can buy his music at soundclick.com 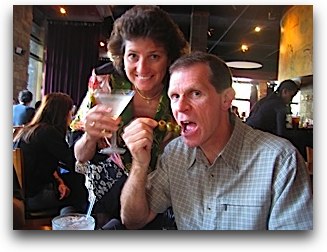 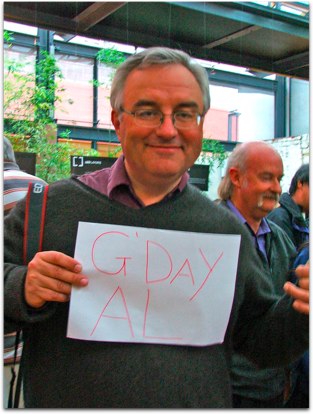 Good friend of the show Rose from Australia had quite an adventure. As you might know, Leo LaPorte went on a photo shoot to Tasmania, Australia last week, and he ended up in the small town of Hobart, or as Rose calls it, Slowbart, which happens to be right where she lives. As you may remember, Rose begins every audio entry with “G’day Al” – well, she actually got a chance to meet up with Leo, and she made him let her take her picture, with HIM holding a sign that says “G’day Al”! I put the photo in the show notes, I think it’s hysterical! Hope you enjoy it.

Time Machine
Last week I explained that i think one of my problems with Time Machine is that it backs up too often so my disk gets full before it ever gets to the “weekly till the disk gets full” part, and then fails. I asked my friend David Sparks if there was a setting in Time Machine, and he wrote back “There is no setting. Steve doesn’t trust us. It would be too many buttons. He just wants one big button .. no little buttons.”

Comedy aside, I think it’s Bad design, but I asked if anyone had a hack for Time Machine that would let you affect the schedule, say backing up daily instead of hourly. I got a bunch of responses luckily! Brett Brady and Pat Putman both sent me a link to TimeMachineScheduler from klieme.com. According to the site, “TimeMachineScheduler disables the automatic backup function of Time Machine and installs its own launchd agent. As the agent is located in the main library, the administrator password is required for all (writing) operations. Except disabling Time Machine no further system files and preferences will be touched by TimeMachineScheduler.” That made me a wee bit nervous. I’ve edited launchd before, but I did so with trepidation.

Jeff Miller sent me a link to a different tool, it’s called TimeMachineEditor from timesoftware.free.fr. Oh, and Chin posted a comment on the blog about BOTH of these tools. This one sounds slightly less scary because it at least tells me how to get rid of it if it doesn’t work out for me. According to the website, “TimeMachineEditor merely updates a system configuration file to change the Time Machine scheduling.
Nothing is installed in your system and you can easily revert back to the default settings (using the ‘Show Default Settings’ menu item from the ‘Settings’ menu). Once you have changed the scheduling, you can still use the Time Machine preference pane from “System Preferences” as you did before. “

I think I’ll give TimeMachineEditor a try soon, I’ll let you know how it works out over time!

Photoshop Elements correction
Last week during Chit Chat Across the Pond with Bart, we were talking about the GIMP, and I mentioned a key difference between the GIMP and PSE is that PSE doesn’t have curves. Well, Gérard from the Netherlands sent in this polite correction!

“In the new Photoshop Elements 6 there are levers en curves. I heard you and Bart speak about it on your last podcast. I own the new Elements 6.0 and it’s worth every dime. Also the scanning issue of yours (cropping, straightening, and saving to multiple images) is solved with Elements 6. It takes a scan with multiple images and makes seperate straightened en cropped images of them. It saved me hours of time.

Thanks for the correction, Gérard – I had no idea, and I actually HAVE PSE 6 too! Just haven’t taken enough time to start really poking under the hood yet.

Interview with Honda Bob about his tech uses for his work! give Honda Bob a call at (562)531-2321, or send him an email at hdabob@aol.com. HDA Bob’s Mobile Service is not affiliated with Honda, Acura or Honda Worldwide.

Macility Review from Hannes
Hey, this is Hannes from Austria with my second review for the nosillacast. I looked around for something to talk about this time, and searched the archive of the website for mentionings of some of my “install first on a new mac” apps. I was surprised to find nothing about the Macility tools.

These Tools are produced by a company called Ergonis, located in Austria, near the university where I studied. The boss of this company even tought me some programming. Anyway, to the programs: the Macility tools are four separate programs: PopChar, KeyCue, Typinator and EasyBeat. I’ll skip EasyBeat because I have never used it, but the other three apps I use regularely.

I’ll start with PopChar. This is a small application which displays all possible characters from a given font and allows a simple click to insert this symbol into the current document. For most applications, it can even auto-sense the currently selected font. I find this exceptionally useful when I want to use arrows or mathematical symbols. The application also supports pasting plain text, styled text and even those codes needed for HTML display. PopChar is also available for Windows and costs 29.99 Euros with 2 years of upgrades (after that, you’ll have to buy an extension for 14.99 Euros or stay with the older version without upgrading).

Next in line is KeyCue. This is a background application which helps you to remember and learn the keyboard shortcuts. When you start using a new application, you soon notice that some tasks you often perform simply get done so much faster when you remember the shortcut instead of moving the mouse around and searching in the menu. KeyCue helps in this case (at least for shortcuts with the option key). Simply hold down the Option Key for slightly longer than you usually hold it for a shortcut, and up comes a nice exposé-like window showing all the possible shortcuts, even highlighting the current ones if you use combinations with alt, shift and ctrl. You can even select one with the mouse if you really want to. This works great for almost any application, even for Textmate, which has the greatest number of shortcuts available that I have ever seen. KeyCue costs 19.99 Euros, Renewal after two years is 9.99.

Last but not least, there’s Typinator. I’ll talk a bit more about this application, mainly to compare it to some similar applications Allison has mentioned before.

Typinator is an auto-typing application, similar (but not quite) to Textpander, TextExpander or TypeIt4Me. It supports drag-and-drop import from these applications to make the transition easier. Recently, version 3 was released, which puts the app (finally) into menu-only mode, without yet another Dock icon. The main feature which I found that’s different to the competition is that it allows not only to insert plain or formatted text, but even images.

It’s also a simple startup program instead of a system preference (which allows easy uninstall!) and has application-specific settings. It’s available for 19.99 Euros (renewal price 9.99), which makes it also cheaper than TextExpander or TypeIt4Me. A free alternative previously mentioned would be RapidoWrite, but this is not so feature rich. You can also use Typinator as auto-spell-correction, there are some built-in corrections and if you need more, there is a whole additional dictionary available for download from the website.

So, to go on a shopping spree, go to www.macility.com or www.ergonis.com! You can also buy all three applications in a bundle, saving 35% off list price.

By the way, if you’re thinking about buying Typinator, there’s a nice opportunity currently running: MacUpdate Promo offers a new applications bundle, one of these applications is Typinator. This promo runs for two weeks starting the 16th of April. Currently, you get 7 applications, but if enough people buy that bundle, all 10 apps are unlocked, maybe even a surpise eleventh. Usually the currently locked offers are unlocked easily within the 2 week period. The last target will unlock Parallels Desktop, bringing the total bundle value to over 400 Dollar. I bought the last bundles and was always satisfied, so if you don’t own most of these apps (like I do already) go buy them! Maybe Allison could also put an affiliate link in the shownotes so that three dollars per purchase go towards the podcast we all like to listen to!

Oh yeah, just some notes on stuff I wanted to comment on:

Firstly: Bracketeer and Aperture: as you may know, I use Aperture for managing my photos – drag and drop does not work from Aperture to Bracketeer – is that only me? I tried to write in to the developer, but either my email got lost or I’m not worth an answer.

Hannes – thank you so much for such a great review! You managed to pack in a lot of apps into one review, and all tools that sound very interesting. PopChar and KeyCue both really caught my interest, I’ll be giving them a try. Thanks again!

Chit Chat Across the Pond
Evernote
*Allison
* FF Beta3 says the plugin doesn’t work so I wrote to the developers. Alex wrote back and says it does work, but there’s hinkiness. Appreciated his response and now I know I can at least try to use it

* text recognition is not even close to good. doesn’t even recognize printed text half the time, much less handwritten (at least in pics taken by my iPhone which is what I was really excited about)
* Bart:
** Love the syncronisation – that’s the killer feature for me
** using it a lot but feels rather beta
** silly things like almost no fonts to choose from and bad wrapping are holding it back
** have very high hopes

Bart gets a new Mouse: http://www.bartbusschots.ie/blog/?p=756
* Don’t you find the lag of a wireless mouse irritating? You start moving the mouse and about a half second later the darn thing reacts?
* Answer – no noticable lag on this mouse … very fast and very accurate
* Did NOT install the drivers becayse the mouse works flawlessly without them and I do not trust Logitech
** The APE fiasco
** Their control centre breaks Growl by abusing the OS

Youtube video of “An Engineer’s guide to Cats” that I referred to in Chit Chat Across the Pond:

Well that sure was a long show – and I have about another half a show’s worth ready to go! I almost thinK I should have done a bonus show this week. Thank you all so much for sending in the great emails and reviews, I love it! Keep it up by emailing me at allison@podfeet.com. Don’t forget to click the MacUpdate affiliate link if you’re going to buy that bundle this week too.