In this special episode of the NosillaCast, I interview Rod Roddenberry, son of Star Trek Creator Gene Roddenberry. Rod tells us about his love for the Mac, the documentary he’s creating about his dad, and his passion for diving.

Listen to the Podcast Once (27 min)

Today is Wednesday May 13th, 2009 and this show number 204. Yes, I know I forgot to say the date AND the show number on Sunday, but I was so excited about having Don McAllister live on the show that I got flummoxed and forgot to read my own script! Well speaking of flummoxed and off script, what the heck am I doing broadcasting a show on a Wednesday? This is the special Rod Roddenberry episode as promised last week. In case you missed that show, last weekend Steve and I had the thrill of having Don come visit us for the weekend and for the three of us to go over to Catalina Island to see a special screening of the new Star Trek Movie.

We had such a ball with Don – fed him Taco Bell (he came in on a Thursday), played ping pong, had a few beers, he taught me how to drink Jack Daniel’s and coke – and we played on our computers quite a bit. The way we ended up on Catalina (which by the way is a 27 mile long island off the coast of Los Angeles) was because Rod Roddenberry, son of the legendary Gene Roddenberry, creator of Star Trek actually invited us! Adam Christianson of the MacCast is a friend of his and through him Rod invited all the Mac Podcasters. For some reason none of the others came, but we were there in a heartbeat. A great thrill for me was when we were walking down the street we recognized Rod (we’d been watching his video blog (The Rod Pod) and of course I brashly ran up to him and introduced us. Imagine my thrill when he said, “wow, that’s crazy hearing your voice NOT through my headphones!” I couldn’t believe it, he actually listens to the show! How cool is that? 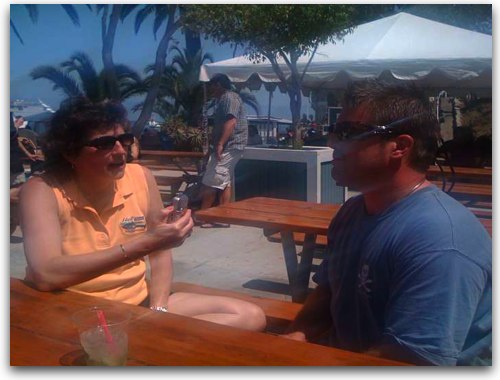 Well anyway, fast forward to the afternoon when Rod showed up at a beach side restaurant/bar where we were hanging out (he’d actually said he’d be there) and of course I just HAPPENED to have my Zoom H2 with me, so I asked him if he’d mind terribly if I could have a five minute interview with him. He said, “five minutes? is that all I get? I’ve always wanted to be on a Mac podcast but didn’t know if I was worthy!” I loved it! I decided, out of the goodness of my heart to let him have a 30 minute interview. i think you’ll like it, he’s so genuine and fun and kind and enthusiastic I didn’t want it to end either. So enough of me yapping, let’s listen to the interview.

Well that’s going to wind up the show, I put a link in the shownotes to roddenberrydiveteam.com so you can go check that out, and be sure to follow Rod on twitter at twitter.com/roddenberry and me at twitter.com/podfeet. Keep all the great emails coming (especially those dumb questions!) and we’ll see you next week on the 4 year anniversary show complete with party gifts! Thanks for listening, and stay subscribed.