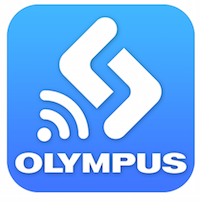 I droned on and on about my choice of a new mirrorless camera a few months back, and in the end I chose a camera from Olympus called the E-M10. One of my favorite features of this camera is that it has built in Wi-Fi. I can tap Wi-Fi on the screen, and my iOS devices can connect to it to choose individual photos to suck in so I can shoot them off to social media sites. It’s much more convenient the Eye-Fi card method where EVERY photo sucks into your iOS device. You can also control the camera from your iOS device, zooming, changing settings and even taking photos, all from the App called OI.Share, which stands for Olympus Image Share.

When I got my new iPhone 6 I installed OI.Share on it but for the life of me I couldn’t get it to work with my camera’s Wi-Fi. The phone could see the Wi-Fi hotspot of the camera, and it could connect to it just fine, but I couldn’t get OI.Share to talk to the camera. I tried it on my friend Diane’s iPhone 5 (who has the same camera and the same software installed) just to make sure it wasn’t my camera being the pest, and it worked fine on her phone. She suggested maybe it was an iPhone 6 problem, so we installed OI.Share on our good friend Pat Dengler’s iPhone (AKA yourmacdoctor). Again, it worked just fine on Pat’s iPhone controlling my camera.

One of the things I love about geeky friends is that they actually enjoy a challenge like this. We’d had our pizza and wine and were planning on relaxing to a nice movie, but Pat insisted that we dig in and figure this out. OI.Share installs a provisioning profile on your iPhone. Remember last week when Bart was talking about how if you try to sideload software from a dodgy 3rd party site on your iPhone it will have to use a provisioning profile? Well this is not dodgy software, but it does use that Profile technology built into the iPhone.

Pat was scanning through her phone and mine to try to find differences, and noticed that I had two Profiles installed. I had the one for the camera, but I also had one for Cloak. She suggested we delete it. That was the point at which I slapped my forehead and said “d’oh!” As you may recall, Cloak is a VPN service that I use, which has the awesome feature of making sure you’re never on untrusted Wi-Fi. It does this in two steps. If you connect to a Wi-Fi network you’ve never used before, it initially enables what they call Overcloak, which is a polite way of saying, “I ain’t letting you use this network to go anywhere!” Overcloak gives Cloak the breathing room to connect you to a VPN server, and then disables Overcloak and lets you begin to surf the net. Realize now that I’ve told my phone to connect to this camera Wi-Fi network, it enables Overcloak, but then it cannot establish a VPN connection for you, so you get stuck in this limbo state where you’re connected to Wi-Fi but you can’t actually use it to do anything.

I spoke to the Cloak people and because of the way services can’t really talk to each other easily on the iPhone, they have no way of telling you why your camera Wi-Fi software isn’t working. You just have to be smart enough to realize what’s going on when Wi-Fi doesn’t work. Luckily to get all this working properly was only a matter of me telling Cloak that the camera’s Wi-Fi network was trusted and all was right with the world. 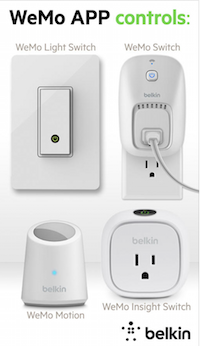 Last year Steve and I bought a couple of Wemo switches, those cool little devices you plug into a wall and then you can control over Wi-Fi whatever is plugged into them. I talked about them on Show #448. We had a blast setting them up and playing with them last Christmas. We put one on Mr. Santa (our blow up Santa in the front yard) and one on the Christmas tree. It was awesome to be able to control them with our phones at any time, or to create rules within the phone application to tell them to come on at dusk and off at dawn. It was really cool.

After Christmas the WeMos weren’t quite as valuable but Steve put one on the front light again so he could have it go on at dusk and off at a prescribed time. One day he noticed that it wasn’t going off at the right time. He also wanted to use the one that had been lying dormant since Christmas to now turn on Mr. Ghost in the front yard. He decided to try resetting both WeMos and starting from scratch. And that’s when things turned into a giant mess. He did most of the work but eventually got me dragged into it, and for the life of us we could not get these gadgets to work.

Initial setup of the WeMos (and the Nest Protects by the way) is done by connecting your phone to the wireless network that the WeMo creates all by itself. Once the two are talking to each other over Wi-Fi, you use the phone to teach the WeMo how to talk to your REAL Wi-Fi network. From there you set up the second WeMo to talk to the first WeMo and all of them start working. In theory that’s how they should work and that’s how they DID work last Christmas.

Now though, we could get the indicator lights to illuminate on the switches, and turn from amber to blue and things like that but the switches wouldn’t show up correctly in the WeMo iOS app. One of the great joys of retirement is that you can actually call people on the phone. Steve called up Belkin, the makers of WeMo and he got an incredible amount of tech support from them. These devices were just shy of a year old and he got three different very technical people to help him. They called back when they said they would and really knew what they were talking about.

However, they couldn’t help us figure out why the WeMos seemed to be misbehaving. One way to illustrate the technical support level of the Belkin folks was that one of them asked if we had a dual-band router. We told her that we did, and she asked whether we had named both bands by the same name. Let me back up and explain this part. Older devices operated on the 2.4GHz frequency band, while newer devices can use 2.4 or 5GHz and some newer routers support both bands. Even though the dual-band devices can operate on the 2.4GHz band, you really want them to be on the 5GHz band while providing the 2.4GHz devices a place to operate as well.

You can configure your router (such as the Airport Extreme) one of two ways. You can create two separate networks with different names so you can tell them apart, or you can give them one combined name. If you name them separately, you have to configure each device and figure out which of the two networks each device uses. If you name them the same, the devices should (emphasis on “should”) auto-select the right band for them. When you upgrade your router, if you pick that exact same name (and password) you shouldn’t have to go to your TiVos and AppleTVs and Nexus 7s and iPhones and Windows phones and reconfigure them all.

Ok, back to WeMo. The woman from Belkin suggested that perhaps the problem was that the WeMo wasn’t actually auto-detecting the right band, so we might need to separate the two bands. I groaned because we have seventeen devices on our network and it meant reconfiguring every one of them. She thoughtfully suggested that we simply change the router, jump start the WeMos and then change it right back. Clearly they CAN work on the dual band network as we had it set up that way at Christmas, it’s just that they need some help getting restarted. We separated the bands, tried again and STILL the WeMos wouldn’t work.

You know where this story is going, don’t you? The WeMos were creating a Wi-Fi network, our phones were connecting to the WeMo network, and our good friend Cloak was turning on OverCloak to protect us until it could establish a VPN connection over the WeMo’s network, which of course it wouldn’t do because the WeMo network isn’t trusted. All we had to do was tell Cloak that WeMo was a trusted network and everything on the WeMo started to work. We felt terrible about how hard Belkin had worked to help us, but luckily they had scheduled up a follow up call to check in on our progress so we were able to tell them the solution. Instead of calling us morons, the guy who called us back sounded really interested and said he would add it to their knowledge base so if anyone else ever had the same symptoms they’d have one more tool in their tool belt to help them.

Bottom line is that Belkin rocks, and I’d buy from them again in a heartbeat. And if my excitement about Cloak has convinced any of you to buy the service, or one like it that auto-detects untrusted networks for you, keep these stories in mind so when you’re configuring odd devices you won’t get stuck like we did!