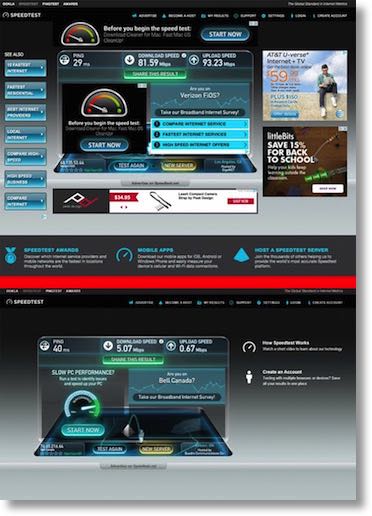 Last week Steven Goetz and I were doing some network performance testing and we happened to send each other screenshots of our results on the Ookla Speed Test Site. I was immediately floored by something. While my screenshot had 13 separate ads on the page, his was showing only 3. He was running the Ad Blocker extension in his browser, and I was not.

Of course I’d heard about ad blockers in the past but I had purposely avoided them because I do understand that ads are how virtually all of the awesome content we have available to us is paid for. I’ve always felt that we shouldn’t use them because otherwise we’ll start seeing more paywalls and gone will be “free” content.

I remember a long time ago Lynn York wrote to me and told me that she couldn’t see the Amazon Affiliate link I kept yapping about. I told her it was in the upper left on podfeet.com but she couldn’t see it. That’s when she realized her ad blocker might be blocking my Amazon Affiliate link. She whitelisted my site and sure enough there was the link.

This got me thinking about ads and ad blocking and I wanted to sort of talk out loud to you guys about it. I am completely split in half on the issue. I can easily argue both sides of this issue without any outside help.

I heard Steve Kovach of Tech Insider on Leo Laporte’s TWiT show say that turning on ad blocking is “almost like stealing”. I think that’s a load of what comes out of the back of a cow. Is it stealing if you DVR a TV show and fast forward through the commercials? Jason Hiner of CBS Interactive who was also on TWiT talked about the social contract we have with content creators, but I think the content creators violated the contract first. Yes, like a petulant child I’m saying “THEY started it!”

In the old days of a link here, a graphic there for a product on a page, we didn’t bother with ad blockers. The ads weren’t that bothersome. Of course we’d rather have gotten a clean look with just the content we’d asked for but we could at least stand the ads.

Nowadays the ads have gotten so horrific that it’s actually stressful to surf some sites. In the same episode of TWiT where Kovach called us thieves, Georgia Dow said that the ads of today are actually “emotionally damaging” to us. Kovach scoffed at this but I think Georgia makes some sense.

Let me give you my favorite example. I’m a fan of Wired, and they often post great links early in the morning when I first get up. I read Twitter on my iPad, and if I click a link to Wired, I’ll be able to read about 2 lines of the article, and then suddenly the entire screen is taken over by an ad. That’s bad, but what’s worse is that I can’t close the ad. The iPad is natural in a landscape orientation and the X in the corner is ONLY visible in portrait mode. Every day I would get angry and grumble about it. I don’t know if I was emotionally damaged but I don’t thing getting angry at things is healthy. Instead of letting this continue to damage me, I chose to stop following links that go to Wired articles.

As the ads get more and more intrusive, as Dow says, chasing you around on the screen and blinking and auto-playing, the only way we can continue to get content without harm to ourselves is to resort to ad blockers.

Now let me talk out of the other side of my mouth. One of the main ways the NosillaCast stays afloat is the Amazon Affiliate link on my site. It’s sort of an ad, but in reality it’s there so you can do what you were going to do anyway, which is shop at Amazon, but by going through my link a small percentage goes towards the production of the show. Do I continue to use this link and just hope the NosillaCastaways are tech savvy enough AND generous enough with their time to whitelist my site in order to send some revenue my way to pay for web hosting? Good question.

I really appreciate Dick Nelson who wrote to me recently about this. Being a fellow geek he did some investigation on why he couldn’t see my Amazon Affiliate link. He runs both Ghostery and Ad Blocker and so he eventually sorted which one was blocking it. Through his investigation though I came to appreciate the second reason people block ads, and that’s for privacy reasons. I’m sure you’ve noticed that you can search for a camera lens and for weeks everywhere you go you’ll see that lens EVERYWHERE, even if you already bought it. That’s the joy of tracking cookies.

You seem to have about four trackers such as Google Analytics and Amazon Affiliates and that is understandable. My problem is that there are many sites that have 20, 30, and as many as 50 trackers on every page. I do have a problem with this. I don’t want all my personal browsing information sprayed all over the Internet to everyone that has a dollar to spend. Not only does this unknowingly share information about me with many companies, but it also wastes my time and bandwidth loading all the tracker information. Rant over.

I think Dick has a right to stop this from happening. Is he stealing like Steve Kovach says? I would suggest not. Dick pointed out that one of the trackers on my site is Google Analytics. This is pretty darn crucial to me because it’s how I prove that I AM somebody. For example this week I applied for a media badge for CES 2016, and I was required to prove my download stats with a link to Google Analytics. If everyone used an ad blocker and that stopped the trackers, then where would I be?

And then I put on my user hat again and I see that inane dancing belly fat ad and I want to scream! I’m reading a web page and I see those double underlines and I get stressed out because I’ll have to be VERY careful or giant popup ads will fly in my face if I accidentally hover over any of them.

I can sit here and have this argument all by myself since I definitely see both sides of the problem. As a user I think something has to change because the web is getting much less fun because of the annoying ads, and as a content producer I can see the side of making money for the content we produce.

I figured there was one thing I could to on my end, and that’s replace the ad on my site that Amazon gives me and instead use a static image with a link that takes you to Amazon. It’s definitely functioning as a way to get to Amazon and I sure hope I still get credit if you click on it! By the way, I had to choose something to pretend you’d searched for in the link so I chose Amazon Basics, but of course you can change the search once you get there.

Since I’ve had this argument with myself, I’d be curious what you guys think about this. Leave a content on podfeet.com, write an opinion piece on our Google Plus community at podfeet.com/googleplus, tweet me, Telegram me; any way you want to give me your opinion would great.