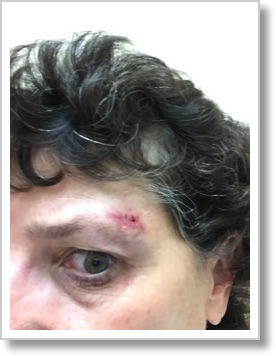 I come from a long line of extremely clumsy people. The Podmom broke her middle toe so many times they took the bones out of it, and my dad broke his nose so many times they took the cartilage out of it! I inherited this genetic trait, and I can remember from a very young child hearing my mother say, “you’re always hurting yourself.” It seemed to be a mystery to her where I got it.

Before I leave on my 3 mile afternoon walks with Tesla, Steve usually says, “Walk carefully.” I make fun of him for worrying so much. It’s not like I’m bike riding. But maybe he remembers the time I was bike riding and ducked under some hanging vines, and managed to flip over the handlebars onto my head and other extremities. Or maybe he remembers the time I was jogging in the neighborhood and managed to break my hand. Think about that one for a minute. Or maybe he remembers when I broke my foot playing volleyball. Perhaps it was the time I broke my nose doing hurdles that gives him pause. Are you noticing a trend here?

Wednesday this week I went for my walk and Steve didn’t say, “Walk carefully.” Queue the ominous music. I was about a mile from home when I managed to trip on the tiny little lip that’s left after they make a wheelchair ramp up onto the sidewalk. I’m pretty sure I rolled my left shoulder forward so I hit my upper arm first (based on how sore my arm is), but that still left enough room for my neck to snap and hit my head on the concrete.

Before I get to the tech part of the story, let me assure you that I am fine. So back to our story:

When I go on my walks, Steve likes to catch up on a good science fiction novel. He likes to read lying down. It’s inexplicable, but somehow this “reading” often turns into a nap. I suspect it might be part of the plan, because he puts the landline phone in another room before he lies down. He also puts his iPhone into Do Not Disturb and places it in the other room.

So anyway, here I am with blood dripping down my face. A nice woman named Chica, in front of whose house I just crashed, is administering first aid to me. I had the presence of mind to call home, but of course the landline phone is in another room so it doesn’t wake Steve up.

I then called his iPhone and to my surprise and relief, he answered my call for help and rushed to my aid. Now remember I said his iPhone was in Do Not Disturb mode? How did he know I was calling? 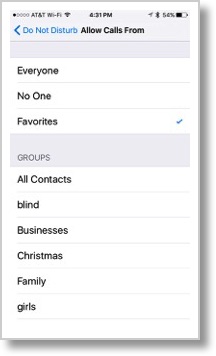 Apple’s Contacts app for the iPhone allows you to add people to your Favorites list. Then in the Do Not Disturb settings on the iPhone you can choose to allow it to let calls through from your Favorites.

But his iPhone was outside the room and muted as well, so how did he get my call? One piece of tech was still connected to him, and that was his Apple Watch. Since his iPhone was in Do Not Disturb, that also put his Apple Watch in Do Not Disturb, but the watch still gave him a gentle tap on the wrist because I’m his Favorite. He woke up, tapped the watch to answer the call and heard my plea for help.

If you want to get calls from your loved ones in an emergency, go to each person’s contact, tap on Edit and then hit the Add to Favorites button. Then open up Settings, select Do Not Disturb, and then select Allow Calls From. In this window you can set it to Everyone, No one, or Favorites. You’ll also notice that you can select Groups instead of favorites.

Because Favorites doubles as speed dial on the iPhone, I have my local pizza joint in that list. If you’re like me, it might make sense to create a group called Disturb Me, or Really Favorites, or My Main Peeps, and then add that group to Do Not Disturb.

I assure you that I’m healing up fine, in spite of the rather gruesome photo I included in the blog post and I’m sure glad Steve had me in his Favorites, and that he has an Apple Watch.