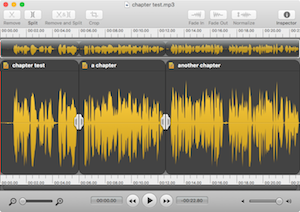 If you’ve been playing along with the home game, you know I’ve been on a quest to figure out how to give you guys chapter marks in the NosillaCast in a way that wasn’t a giant pain for me. While it’s easy to put them in as I record using Hindenburg Journalist, it’s been a bit of a struggle how to keep them in the file by the time I send it to you.

I export from Hindenburg as AIFF, an uncompressed format. I want it uncompressed because I process the audio after export using Auphonic to make the levels consistent throughout the recording and to raise the volume to industry loudness standards. If I did all that on a compressed MP3, the audio would be compressed twice and wouldn’t sound nearly as good. The problem is that it appeared that chapter marks aren’t actually exported with the AIFF. Bart and I tested the file on a whole host of different apps and confirmed this.

The dev of Hindenburg suggested WAV, another uncompressed format but it also failed to retain the chapters on export.

Then I tried exporting the text file and had the great fun of writing all that Perl code, regex, Bash scripts and Automator actions to fix the formatting of the chapter marks text file. I knew that as of this week’s show, I’d be able to import the AIFF and a perfectly-formatted text file into Auphonic and have it work.

That was on Wednesday. On Thursday I received an email from Michael in Germany. I won’t try to paraphrase what he wrote, here are his own words:

I think the problem is the AIFF file format that you use. While AIFF files – just like MP3 – can contain ID3v2 tags I think the chapter marks extension is simply not supported.

I thought I’d give it a try myself: I produced 10 seconds of crappy audio with two chapter marks in Hindenburg. I opened the file in a text editor and I could see that Hindenburg had at least tried to add the chapter marks. The text of both marks was visible at the end of the file. But no podcatcher or audio software did see the marks. Fission from Rogue Amoeba even refused to open the file and said it was corrupt.

I don’t know why the developer of Hindenburg suggested WAV because from all I know WAV files can’t contain tags and thus no chapter marks (correct me if I am wrong). Nonetheless, Hindenburg tried to add chapter marks to the file, which I could see with the help of the text editor. But to no surprise, none of my software could read them.

But the solution is very simple, I tried it: Just select Apple Lossless as audio format while exporting in Hindenburg. Upload this file to Auphonic, choose mp3 as output format, start processing and voila! An mp3 with chapter marks is produced. Don’t worry if you don’t see them in your audio editor. Most editors ignore them. But in Fission they are visible and – most important – Downcast (my podcatcher of choice) sees them, too. By the way: at least in the Mac version of Downcast you can simply drag-and-drop audio files into the program and play them. You don’t need to upload them to a server first just to test them.

I hope that this works for you, too.

Well, guess what? He solved ALL of it!

I hadn’t thought of using Apple Lossless (didn’t even notice it was an option). I looked it up to learn a bit more, and in the Wikipedia article it explains that it uses the same (.m4a) container as AAC but is a lossless format.

a lossless format which allows the addition of metadata (unlike WAV/AIFF or other PCM-type formats, where metadata is usually ignored)

So even if the data about chapters was successfully embedded by the Hindenburg dev, it would be ignored.

It is confusing that the Apple Lossless and AAC codecs can both use the .m4a container, but that’s the nature of codecs. If you ever want to descend into madness, look up “audio codec standards”.

By the way, the Apple Lossless Audio Codec (aka ALAC) was originally proprietary but in 2011, Apple open sourced it and made it royalty free.

I’m so stoked that Michael already had Hindenburg so he was able to test this out for me. Like me, he found it on a crazy low-priced sale a while ago. It is curious that the dev never told me to try Apple Lossless. But if he had, I wouldn’t have had all that fun with Perl and regex!

I wanted to prove out Michael’s process. I exported an ALAC file from Hindenburg and then opened it in Rogue Amoeba’s Fission and the file DID have the chapter markers! For grins and giggles I tried running the ALAC file through the desktop version of Auphonic to see if the chapters survived, but as expected, they were unfortunately stripped out.

I then pushed my new shiny test ALAC file to the online version of Auphonic and sure enough, when it was done processing, it exported an MP3 with my chapter markers intact. Amazing!!!

There was one more great tidbit inside Michael’s note, and it was about using Downcast on the Mac. I use Downcast as my video podcast catcher on the iPad, and as a backup audio podcatcher on my iPhone, but didn’t even know there was a Mac version. I’m learning so much this week. 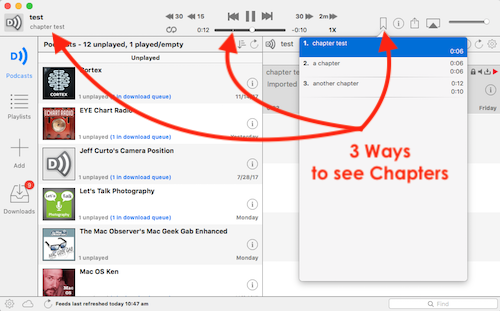 Downcast for Mac was only $5 so a sprung for it.  Sure enough, I was able to drag and drop the final MP3 from Auphonic onto the player and it imported and showed me the chapters. I did have to get some extra guidance from Michael on how to actually see the chapter descriptions, but he pointed to the little bookmark icon and there were my carefully-crafted chapters.

Downcast for Mac isn’t nearly as polished looking as the iOS app but it might just be because it doesn’t appear to have a dark mode. It supports iCloud syncing which is cool too. I don’t ever listen to podcasts on my Mac because my brain can only do one thing at a time and if I’m on my Mac I’m usually reading, writing, recording or editing. But as a diagnostic tool, this is so awesome. I always check iTunes to see if the podcast feed worked properly before I tell everyone about it. I think from now on I’ll just check it in Downcast instead.

That was pretty much the last thing I used iTunes for, so maybe I should pour a little bit out in honor of an app that had a huge impact on getting podcasting on the map. I know it’s good sport to mock iTunes but without its impact on this technology, you probably wouldn’t be listening to me today.

My plan for this week’s show is to use my old AIFF process just this one time so I can exercise my fancy new script. I’m really glad Michael didn’t tell me how to skip all this nonsense until after my script was working because I know I wouldn’t have finished it. I had so much fun doing that work and I hardened some skills that weren’t quite jelled yet.

But next week and going forward, I’ll use Apple Lossless and skip right to the finish line. I can’t thank Michael enough for his assistance his testing, his screenshots and bringing Chapters to the NosillaCast.