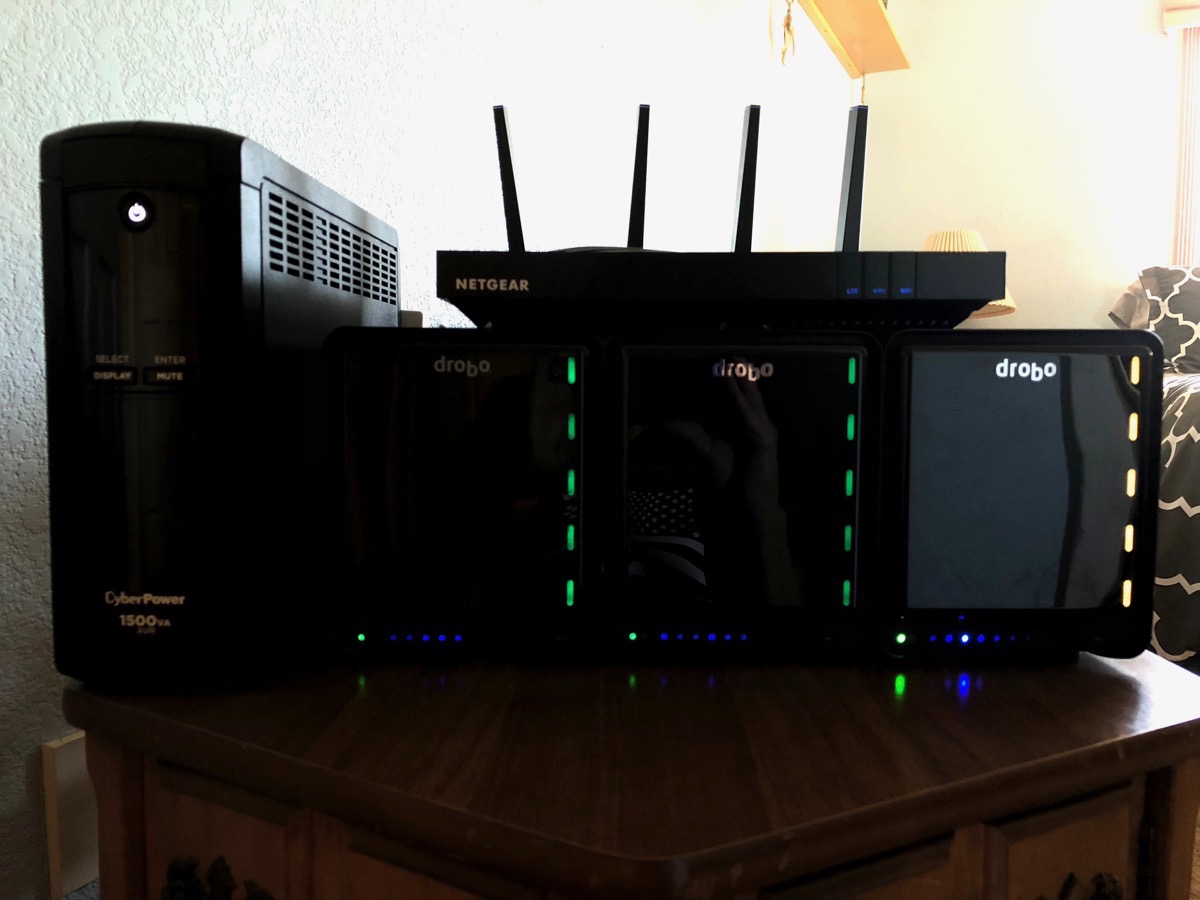 A few months ago I told you about my tests of the new Drobo 5N2 vs the previous 5N model. They call it the 5N2 because it’s supposed to be twice as fast as the 5N. One of the features to allow it to go so much faster was the ability to use port aggregation, aka port bonding. The concept is that you can use two 1-Gbit Ethernet lines into the Drobo and read/write from two different computers at the same time. In reality, as a home user, this feature isn’t required.

Before Drobo gave me the 5N2 for testing, I had a 5N backing up to an older Drobo FS. After I finished my tests, Drobo allowed me to keep the 5N2, which meant I could give the FS to Steven Goetz in thanks for his hard work as my research assistant. He wanted a NAS and I had a NAS to give away so it seemed like a great idea.

In order to retire the FS, I had to do a couple of things. My end condition was to have the 5N2 back up to the 5N. I needed to:

Normally, to migrate from one Drobo to another, it’s an easy process of pulling the drives and putting them into the new device. In my case, I bought new 4-TB drives for the 5N2, so I didn’t want to move the mixed-size drives in the 5N to the 5N2. That meant I had to figure out how to move the data.

As you may recall, I used Chronosync on a Mac mini to run the backups from the 5N to the FS, but it’s a terribly fragile system. I explained it before but having so many devices in the equation seems to just add so much complexity that one thing is causing a failure at any given time.

With two modern Drobos and their vastly improved app interface, I just assumed that there would be a way to back up one Drobo to another and to remove the Mac mini and Chronosync from the mix. In particular, I had read about Drobo DR, a method of replicating one Drobo to another. Sadly, I discovered that feature is only available if both Drobos are the new 5N2.

You may have heard of an app called BitTorrent sync, which has been recently renamed to Resilio Sync. Everything I could read about it was that it was made for this kind of test. However, I couldn’t get it to work. I finally wrote to the Resilio Sync folks and they told me that it would never work because I was mounting my drives using SMB, and it doesn’t work over SMB. Ok, that’s two ideas down.

Next, I found OwnCloud which looked a lot like Resilio Sync, but it wouldn’t work either. How about plain old command-line rsync? That’s what Chronosync is doing under the hood (but only runs on the Mac). I stumbled around with that for a while but didn’t have the energy or enthusiasm to get it going.

Chronosync on the Mac mini Wins

After a few weeks of testing and failing on other methods, I realized I would have to stick with Chronosync on the Mac mini to let the two Drobos talk to each other. This is a vote for the Synology DiskStation which does have software to back up between two DiskStations.

I needed a way to reduce the fragility of the Mac mini/Chronosync/Drobo setup though. One of the sources of fragility of my previous backup strategy from Drobo to Drobo was that the Mac mini is on WiFi. It’s downstairs connected to the TV as a media server and there’s no wired Ethernet available there. As you may remember, I have two separate networks, one for my IoT devices and one for my trusted devices. Because of iCloud syncing of network connections, the Mac mini occasionally jumps over to the wrong network so it can’t see the Drobos and the backup fails.

I realized that I don’t use the Mac mini in a direct-attached way to watch media on my TV, so there’s no reason for it to live there. I could move the Mac mini out of the family room and hard-wire it to the router so it would stop jumping around WiFi networks. I can do that because in reality I never use it as a media server to the TV. I do use it as a PLEX server, but it doesn’t have to be next to the TV to do that. In fact, if it would stick to one network that would be a huge advantage for its stability on PLEX.

I started by creating a fake share (called deleteme of course) and running Chronosync from the 5N to the 5N2. I put some dummy data in there and the sync went off without a hitch. Next, I synced a share that wasn’t terribly important to us and had mostly text documents in it. It worked flawlessly as well.

Ok, time to move a folder where I back up stuff I do care about. I started the sync with Chronosync and it was humming along and then failed. I checked, and the Drobo 5N2 had disappeared from the network. This was the beginning of a long and frustrating experience dealing with Drobo. 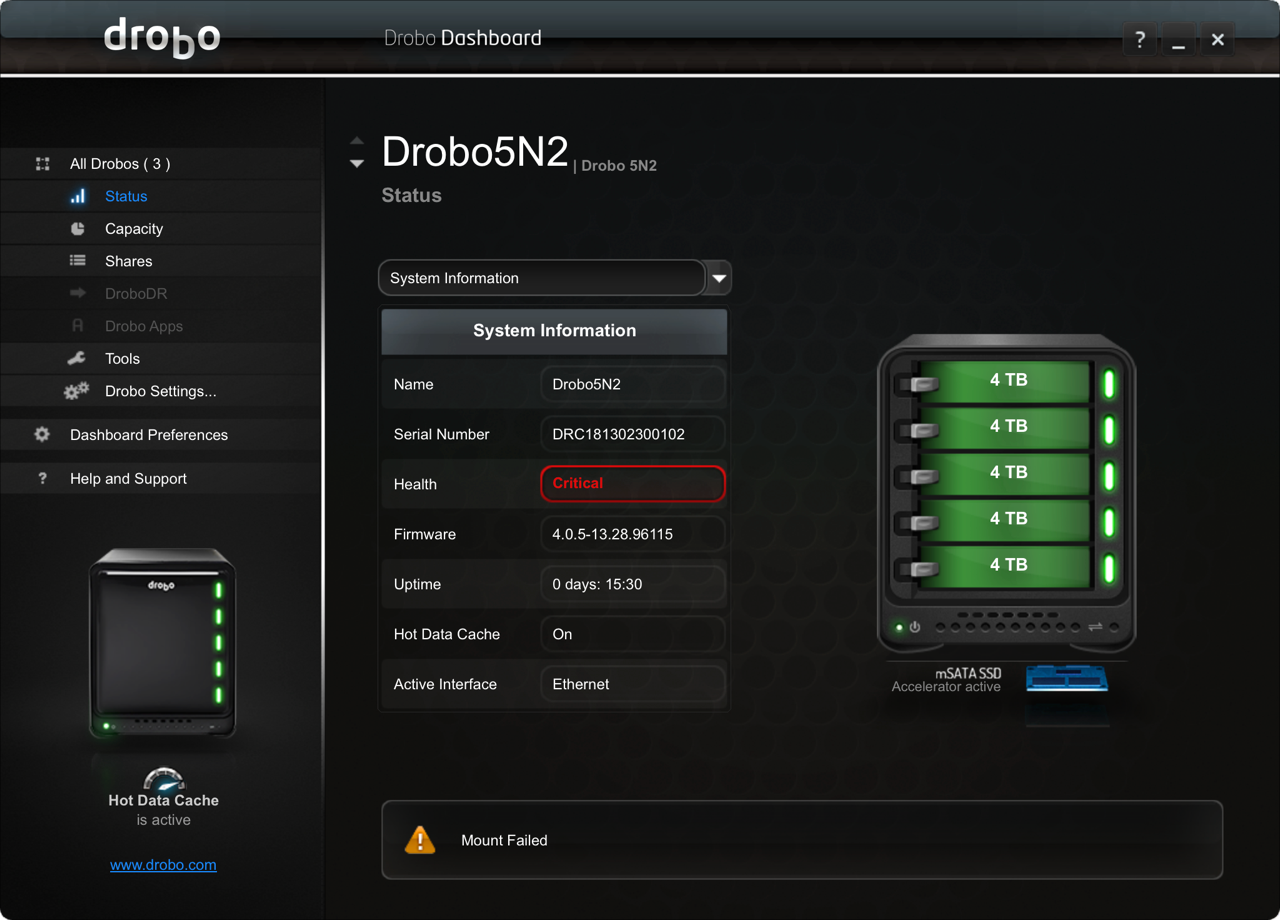 I opened the Drobo Dashboard and the 5N2 said in giant red letters: “Critical” for the health of the system. I tried rebooting and it would behave for a while but then disappear and get back to the critical state.

I thought I’d start with regular support instead of using my direct connection to the CTO. I figured it would give me more information for you on what kind of support you could expect from Drobo. While I got responses from tech support, they didn’t seem to understand the problem. Over and over again I would be asked to run a diagnostic file so they could see what was wrong with it. Well, guess what you can’t get if the health is critical? Good guess, a diagnostic file.

I went back and forth in email with Drobo support on this nineteen times. I’m not exaggerating, I saved the emails. At first I was getting a response from a different person each time I wrote back and they didn’t seem to have any history of the previous conversation. Each email had no history at all. I would be asked to do things like, “try connecting directly to the computer”. The “N” in 5N2 means network attached. Their D-series is for direct-attached, but the support person didn’t seem to understand that or have the history to know what device I was talking about.

If they’d had me trying different things each time I would have been glad to have that much back and forth but every day or so it would be the same request, to run a diagnostic file. I’d reboot, run the diagnostic file and of course right at that moment it would come back with a clean bill of health.

I was noticeably frustrated with Drobo support, so I started looking for answers elsewhere. To my dismay, I discovered that Drobo’s community discussion forums have been offline for over a year. There’s a nice banner explaining that they’re offline but that they’ll be back soon, but the last entry is June of 2017.

It was time to escalate to my contacts at Drobo, as the regular support people weren’t helping me at all. We collectively decided that the 5N2 was broken. I wasn’t sure what they’d do about this as I hadn’t paid for the unit myself, but they gladly scheduled a replacement for me.

I’d like to make a side note here that the entire time this is going on, Steven Goetz is politely waiting for his promised Drobo FS. Sadly he ends up with a very long wait.

When I got the new Drobo 5N2 it was a quick job to swap in the drives, move over the SSD accelerator, and fire it up. All of my shares were there and it was a beautiful thing. Until I tried to run a sync and it disappeared from my network again and showed critical health status.

Steve and I wracked our brains on what could possibly be causing this. We swapped out network cables from the 5N2 to the Netgear router but that didn’t fix it. As we discussed it together we thought maybe we should try moving the 5N2 off of the dedicated port aggregation ports on the Netgear. And that was it, the 5N2 has been working ever since.

I wrote to Drobo support about this and they seemed pleased that we’d cracked the code on the problem but they didn’t have an explanation. I don’t know if you remember this subtlety, but the Drobo 5N2’s implementation of port aggregation is not the standard LACP-IEEE 802.3ad method. They’re working on implementing that later this year, but in the meantime they have a workaround method. I suspect this workaround method was somehow not communicating correctly with the router, but oddly only during this syncing process.

The good news was that we finally were ready to move the data from the 5N to the 5N2. And that’s when it struck me that there’s no reason for me to use Chronosync to move the data in the first place. I don’t need this elaborate check back and forth between two devices to make sure they’re in sync, because one Drobo has nothing on it at all. I started dragging and dropping folders of data over and it worked perfectly. In fact, in doing this Steve and I took the opportunity to throw data away by simply not moving it from the 5N to the 5N2. When it came time to turn the sync on to go from the 5N2 to the 5N, those files would be removed. 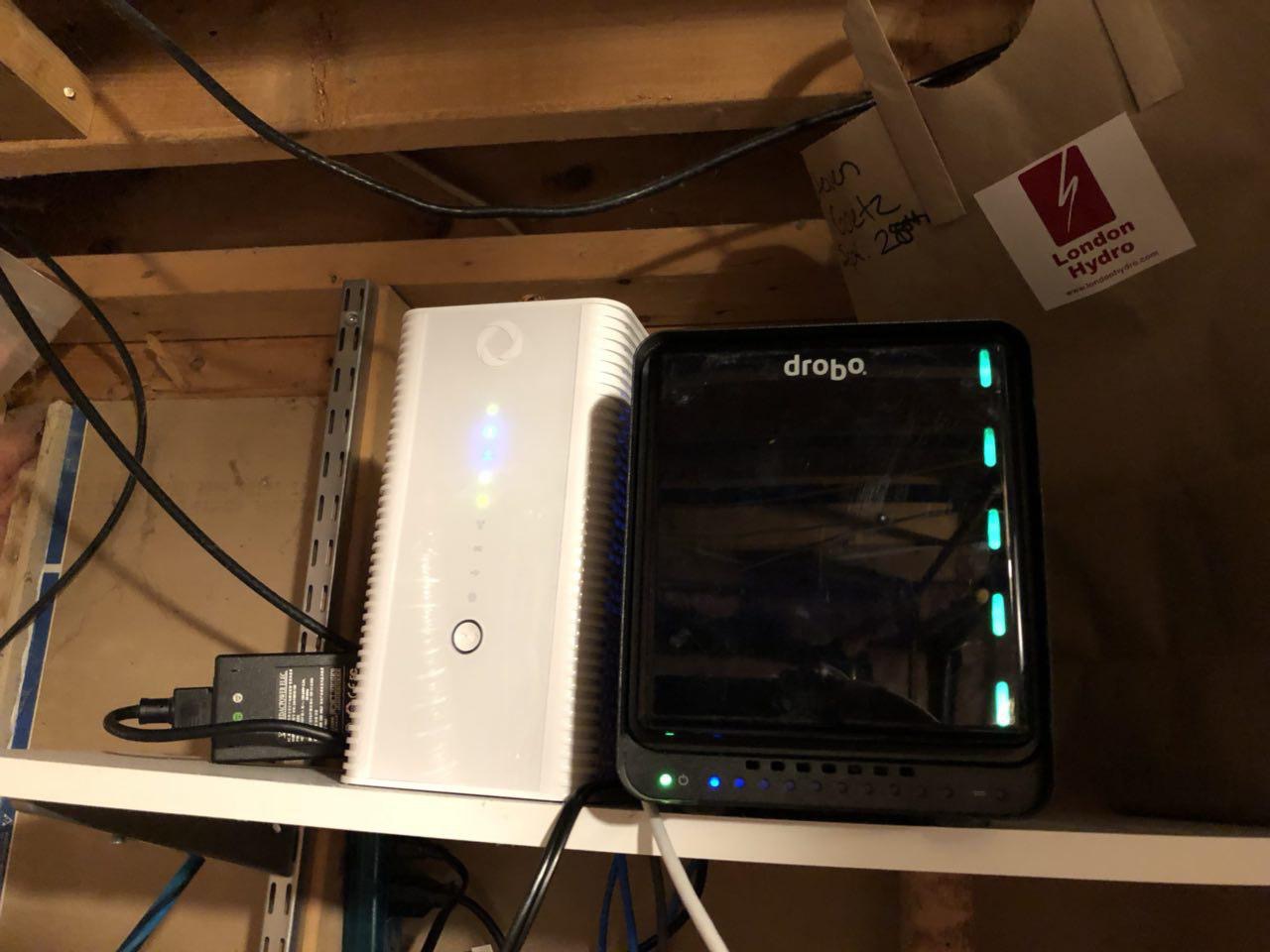 After much trepidation, testing and verifying, I finally got the nerve up to turn the sync on from the Drobo 5N2 towards the 5N. It’s been humming along for several weeks without a hitch, and the Mac mini has stayed on the right network (since we give it no choice).

Steve reformatted 5 2TB drives, put them in the Drobo FS and shipped it off to Steven Goetz in Canada. Steven has been having great fun setting up shares and turning on Time Machine to back up to his new Drobo and everyone is finally happy.

The great Drobo migration of 2018 taught me a few things.

I’m invested in the Drobo system now and it’s all working for me. As much as it pains me though, I’m pretty sure that if I was starting from scratch right now I’d probably buy a Synology.