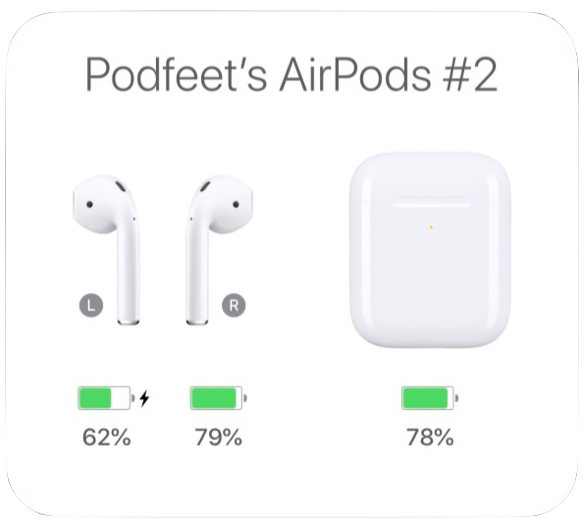 I like to do my product and software reviews as tales of adventure, filled with intrigue and twists and turns as I try to navigate the perils of usage. This is not one of those reviews.

I received the new AirPods yesterday afternoon about 10 minutes before I wanted to go for a walk. I opened the box, pulled them out, opened the case, and my iPhone instantly showed a picture of an open AirPods case with the connect button. I tapped it. Then the screen changed to say “Podfeet’s AirPods #2” and showed me the percentage charge. Done connecting.

That was pretty anti-climactic, what about my other AirPods? Shouldn’t the phone be confused? Wouldn’t I at the every least have to navigate the mire of Settings to get into Bluetooth and disconnect from my original pair? Nope, no fun at all.

I put the new AirPods in my ears and set the charging case down on my Unravel Qi charging pad and it started to charge. I didn’t even get to fiddle with where I set it down on the pad. It just worked.

I went for an hour and 17-minute walk (Tesla made me take the long route) while listening to podcasts. One of the things I was most looking forward to was changes to Siri. With the Generation 1 AirPods, you had to double tap one to fire up Siri but with Gen 2 you simply say “Hey S-Lady” and she gets to work.

I asked her to stop the podcast. Boom, stopped. Start the podcast. Boom, started. I have tried hundreds of times to get Siri to fast forward or reverse a specific number of times in several different podcatchers and it never works. She’ll go exactly 30 seconds or nothing at all. With Gen 2 AirPods, she was able to get Overcast to go exactly the number of seconds I requested. To be fair, it’s possible that Overcast got updated so it listens properly, and that this isn’t an AirPod/Siri improvement at all.

The biggest advantage of not double tapping on your AirPods to engage Siri is that you don’t knock them out of your ear. I hadn’t expected the huge speed improvements though. Siri was noticeably faster and that made me more likely to use it.

One of the big promises of AirPods Gen 2 is that they’re supposed to connect to your devices more quickly. I did some tests comparing Gen 1 and Gen 2 and while the new ones are measurably faster, the main difference I noted was that the new ones were consistent. I conducted 12 experiments for each set of AirPods switching back and forth between my Mac and my iPhone.

But on iPhone, the difference was far more dramatic. AirPods 1 averaged 9 seconds connection time vs 4 seconds on Gen 2. While the time itself might not be that big of a deal to you, I think it can be even more aggravating when the time to connect is inconsistent. In all 6 of my AirPods Gen 2 tests, they connected to my iPhone at 4 seconds. But the Gen 1 AirPods took as short as 6 seconds and as long as 15 seconds!

One other metric Apple is spouting is a 30% reduction in latency. That is the time from when you tap on screen on the phone until you hear what you tap. This is evidently really important in gaming, but I’ve also heard that it’s really important for visually impaired folks. I can imagine it would be really annoying to have a big lag between when you tap and when you hear VoiceOver talking in your ear. I also thought that maybe the reduced latency would make it bearable to use AirPods as in-ear monitors for my own voice when I’m recording. A significant delay when monitoring makes it impossible to speak normally; you find yourself slowing down as you try to talk which makes it even worse!

Next, I tried testing the two generations of AirPods using Audio Hijack where I have sessions set up to monitor my own voice. If you really want to irritate macOS and Audio Hijack, try having two sets of AirPods paired at the same time. At any given moment in time, macOS would expose neither or both sets of AirPods, often the audio indicator in the menu bar would sort of pulse, just like when WiFi is searching for a signal. This would happen when Bluetooth was showing them both connected. Then Audio Hijack really got its panties in a bunch. It would recognize both sets but when I tried to switch from one set to the other it would spin and then pretend it was ready, but never actually start the session.

For a brief moment, very distant apart in time, I was able to get each set to work with Audio Hijack, but they both seemed to have about the same amount of latency or lag, and in both cases, it was way more than I could ever stand to use.

Perhaps my tests are flawed but they’re both real-world problems I would have liked to have demonstrated.

Last week I did a review of the Unravel charging pad from Ampere (which I still love) and I explained that they are also selling a Pods Charging Case for $20 that gives you Qi charging for your AirPods. I still think that’s a great option, especially at that price, but I bought the new wireless charging case from Apple when I bought my Gen 2 AirPods.

With the Ampere charging case, of course, it fits over the original case so it’s a fair amount bigger. It’s not huge, but it is definitely bulkier. The Ampere case doesn’t allow pass-thru wired charging because it doesn’t have a lightning port on it. The Apple Charging Case does have a lightning port, giving you the flexibility of wired or wireless charging. This can be important if you ever like to throw your case into a bag while charging from a power bank. In a pinch you can, of course, wiggle the AirPods case out of the Ampere case to get to the Lightning port, but that’s not terribly elegant.

If you have Gen 1 AirPods, remember that the case itself is a battery so over time its ability to fully charge your AirPods will start to degrade, which might be an excuse to go for the new wireless case. I think it’s really interesting that Apple chose to give us a choice on the Gen 2 AirPods. Having both wired or wireless options has to make everyone happy.

I started this review explaining how disappointing it was that AirPods just work. Usually, at the very least, I can pull out a good delivery story. If you’ve been following along with me over the years, you know that one of my frustrations is that I manage to find the most annoying way to buy my devices, either by standing in line when I don’t need to, or waiting at home for a delivery that doesn’t come when they’re sitting on shelves in the store.

The one thing you can always depend on is that I am the very last person to get delivery from UPS. I can watch the little truck go around my neighborhood on the UPS tracking site and then drive blocks away and sit still. Last time I was waiting for an Apple delivery I tracked the truck till it turned down my street, ran outside, and he drove right past me.

When I got my shipment notification for AirPods and saw it was via UPS, I knew there would be no problem at all going to the gym in the morning because they never come to my house in the morning. Picture this. I’m done exercising around 9:15, and I head over towards the showers. My Apple Watch pings me with a Ring doorbell alert that there is activity at my front door.

I race back to my locker, yank out my phone and hit the notification. Of course, the WiFi signal isn’t good enough back in the locker room, so I can’t get the Ring app to respond. I quickly swiped down and hit the WiFi button to disengage so I can rely on cellular (bless Apple for that button, by the way). As I’m doing all this, I get a second Ring notification that now someone is actually ringing the doorbell. I open the Ring app and the video opens up and there’s my UPS guy at the door.

I was able to talk to him via the Ring doorbell and I asked him if he could leave it. He explained that it required a signature. I was about to ask him to take it to my neighbor’s house when he said the craziest thing. He asked me if I’d like him to come back later! I was floored. I did not know they could DO that! I said, “Yes, please!” And asked him his name. He said it was Justin and he’d come back in the afternoon when I’d be home and he did! He definitely earned the title of, “My little friend Justin”.

3 thoughts on “AirPods 2 – Are You Ever Disappointed When “It Just Works”?”