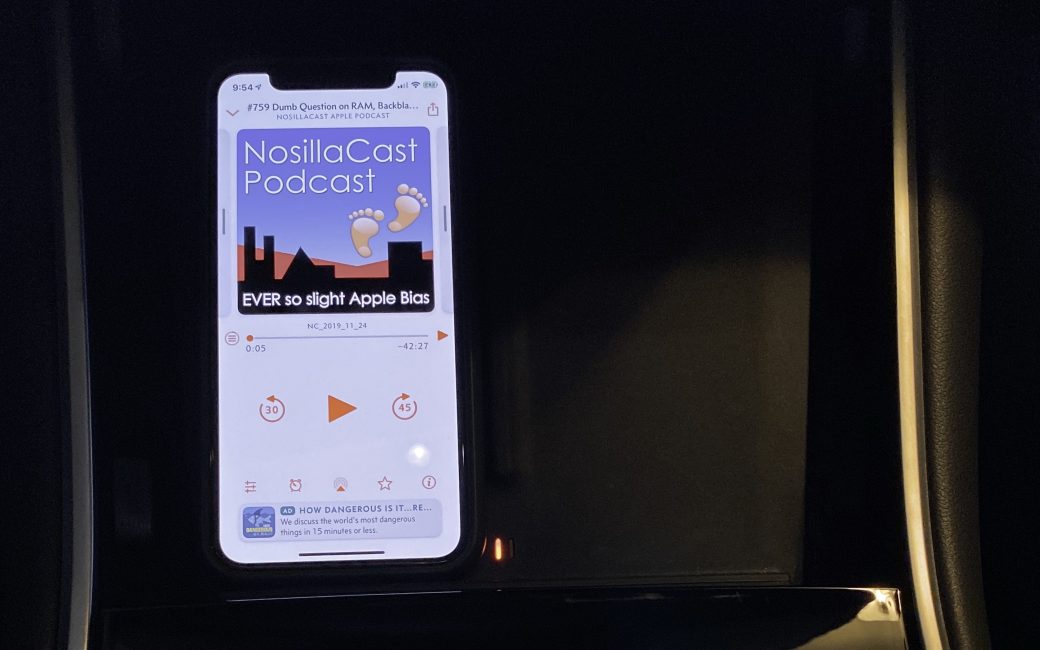 Imagine a car where when you set your phone down on the console, it was magically charging. Well, the Tesla can’t do that. Well, without a little help.

One of the great advances in-car technology has been the ability to charge your cell phone in the car. Am I right? USB-A ports were such a welcome addition. If you’re really lucky, you might even have USB ports in the back seat for those pesky lower-class passengers. As swell as this is, unless you’re a neat freak who puts the cables away when you’re not using them, now we have wires hanging all over the place.

The Tesla Model 3 has a fairly nice solution for this, but I bought an accessory that makes it even better. The Model 3 has an interesting center console between the seats. As with most cars, there’s an armrest that opens up to a giant chamber where you can throw things. They did add a little felt-covered tray on top so little things you get to all the time aren’t buried with all the junk.

If you go forward from that, there’s a very smooth plastic cover (that is super prone to dust, fingerprints and fine scratches). You might not notice that it’s a cover for anything but a gentle tug flips it open to reveal another giant chamber for losing things. Let’s call that the slick cover so I don’t have to keep describing which one I mean.

Then there’s a rubber-coated area at the very front, tilted at around 45 degrees, made to rest two phones. We’ll call this the phone rest. If you open the slick cover I described, you can tilt up the phone rest to reveal two USB-A ports. You can plug in a couple of USB charging cables for your phones, and when you close the slick cover, there’s actually a gap to allow you to pull the cables out for use.

But now the cables are coming up over a ledge, and your phone is sitting on that same ledge, so you’d essentially have to have your phone upside down to accept the cables on top. Or you could lay your phone on the slick cover, but you’re clearly doing it wrong.

Instead, what you’re supposed to do is plug the USB-A end into the chamber, then feed the other end through the underside of the slick cover. When you do that, in theory, you can bend it around in a very unnatural way to feed up through to the bottom of the phone rest. If you succeed at this cable contortion, when you put your phone on the phone rest, you can push it down to connect the cable. No mess no fuss!

And of course, that cable contortion is impossible to achieve. I know I saw it in place at the Tesla dealer, but I think it was sorcery that they were able to do it. I worked on it for about a half-hour and simply could not get the cables to bend 90 degrees to fit in the slot. yeah, I know there are 90-degree bend cables but they still wouldn’t have fit in this close corner.

Rod Simmons of the SMR Podcast convinced me to buy the Tesla in the first place, mostly by his enthusiasm about it. I go to him for all my problem-solving with the car, and he had a great solution for the dangling cable mess. He suggested the NOMAD Qi Charger from hellonomad.com/….

This is a platform that simply rests right where the existing phone rest goes, but it has two USB cables hanging out of the back of it. You plug those into the two internal ports in the big chamber underneath, and now you can simply set any wireless charging capable phone down and it will immediately start to charge. No fussing with cables at all, no mess visible in the car.

When you lay your phone down in the NOMAD Qi charger, a little light turns amber to indicate charging and turns white when fully charged. While it sits at a convenient angle for viewing, it’s too far down and away for Face ID detection on iPhone, and definitely takes your eyes well off the road.

The NOMAD Qi charger is $70 from hellonomad.com/… but I know you’re wishing you could use a Podfeet Amazon Affiliate Link to buy it. I did a search and found several similar devices to the NOMAD. If you’re interested, you might check out the TapTes version (Amazon’s choice) for only $40. It looks exactly the same to me.

The more astute of you may have been thinking that the one problem is that now you don’t any usable USB ports now (except the ones for the back seat). For under $10 on Amazon you can get a USB cable splitter. This gives you one male USB-A end and splits into two female USB-A on the other end. I bought two of these, plugged the male end into the regular USB-A port under the console, and plugged the NOMAD into the female connector on each of the splitters. That leaves me with 2 USB ports still available if I need to charge non-wireless chargeable phones.

I have to admit that with these two splitters in the mix, and two USB cables plugged into them, it’s a big fat mess inside the forward console. I threw a micro-fiber cloth over all of it, and Steve added another little felt-covered tray for his sunglasses, and now we don’t have to look at the mess.

Bottom line is that I think the NOMAD Qi Charger is the best accessory I’ve gotten for the Tesla Model 3. I love the clean lines, not having to think about charging and how it’s agnostic on phone platform.