Have you noticed lately that lots of tech things have little glitches, annoyances, and things just don’t work right sometimes? The other day I noticed that it was relentless how many things didn’t quite work. It wasn’t just my Mac or just my iPhone, it was every bit of tech I touched and every app I used. I decided that the next day I would record every single thing that didn’t work properly for me. I’ll let you decide if it is my imagination that a lot went wrong. Note that very few of these are catastrophic failures. Most of them are the paper cut category of failure, not hatchet wound-level failures. But they were relentless all day long.

Here is my record of all the tech that didn’t work properly in some way in a single day:

1. 6:40am: An alarm went off on my watch. That I didn’t set.
2. 7:17am: I had to try three times to accept a Grammarly suggestion in Safari
3. 7:27am: The format painter isn’t working in Excel. I select a cell with formatting, tapped the format painter and the icon changes to the cursor with a plus sign, but tapping another cell doesn’t paste the format. I tried using the menu to paste format and that doesn’t work either. I quit Excel and reopened it, and paste format worked exactly one time only. Never did get this fixed.
4. 7:32am: I had 3 Excel windows open and the series name from spreadsheet two below where I was working popped over current spreadsheet
5. 7:39am: I as exporting video file from Capto and it exported before I finished typing the name
6. 7:40am: I tried to record the format pasting problem from Excel using Capto. Video and audio are out of sync on captured video so badly that I’m pointing at the wrong cell when I’m explaining my selections.
7. 7:48am: Remember me singing the virtues of Flotato, the app that lets you create web apps of popular services that don’t have dedicated Mac apps? I like to use the Flotato version of Facebook, but it didn’t let me upload a photo when I wanted to
8. 8:13am: iPad defaulted to all caps when I awakened it. As it often does. Really tired of this bug introduced in iPad OS 13.
9. 8:16am: I love Continuity, the set of features that allow you to move seamlessly between iOS and macOS and even between Macs. One of the great features in Continuity is how you can copy something on one device and paste it into another. I use it all the time to type a text message to an Android user using my Mac and then paste it on my iPhone into Messages. But both of my MacBook Pros started displaying a popup saying “copying 1 item from” the other. Hitting dismiss sometimes temporarily removes it but then it comes back. Also of note, I hadn’t copied anything on either Mac. I had just awakened them both when this started happening.
10. 8:17am: I got a spinning pizza wheel in Notes trying to paste in a screenshot of the copy pop up I was just describing. Had to force quit and document this failure using a different Mac.
11. 8:18am: TextExpander refused to expand my snippet for MacBook Pro on the note I wrote about popup at 8:16am. I had to type it out like an animal. That’s 3 bugs in 3 minutes if you’re counting.
12. 8:28am:

My Tesla showed low tire pressure yesterday on the big display. Sure enough, when we checked them by hand, two of the tires were low. We filled up all four of the tires. However, the alert icon is still showing on screen, even though the tire inflation screen shows that the tires are all filled appropriately.
13. 8:32am: I took a photo off the Tesla screen to show you the alert icon about the tires. I used Apple’s Action Menu to copy the photo, pasted it into Notes, and iOS pasted a link to Overcast. So that was helpful.
14. 8:35am: I paused a podcast using the on-screen controls in the Tesla, and a minute or two later, tried to tell it to play again, but the play button was grayed out. I had to pull out my phone and play from within Overcast. Not sure if this was Tesla’s fault, Overcast’s fault, or iOS 13’s fault, or perhaps all three of them colluding against me.
15. 9:21am: The Ring app alerted me to someone at my front door. I tapped the alert, which opened the Ring app, but Ring chose to offer me 2-factor authentication right then. I could not bypass the 2FA screen to get to my alert to see my front door. I’m not against 2FA of course, but I should get to choose when to do that.
16. 9:53am: I keep getting notifications from Telegram of new messages on iOS, but the app is spinning with the word Connecting as though I don’t have Internet access. I can read the full messages in Notifications so I know I’m connected.
17. 9:55am: On iPhone, I swiped down to search for an app. I typed “dr” and before I could finish, Messages opened and started to send a message to my friend Ron. Ron does not have a “dr” in his name, and last time I checked, you don’t spell Messages with a “dr” in it either.
18. 10:00am: I set a reminder for 10am today to visit a specific store before driving home from the gym. I was home around 10:30 when I first saw the reminder. No watch tap, no phone notification. I was absolutely looking at my phone right around 10am but the notification didn’t come until 10:30am.
19. 10:22am: 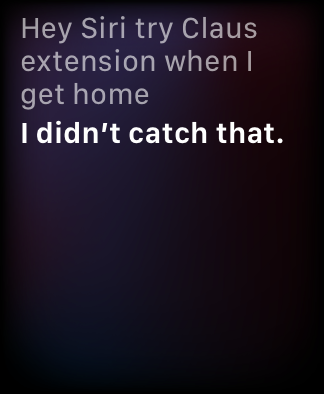 I dictated a reminder into my Apple Watch where I said, “Hey Siri, try Claus extension when I get home”, and it exactly captured what I said. Siri responded by saying, “Sorry I didn’t catch that” and she didn’t set the reminder  for me. Looking back at it, I think this may have been operator trouble, because you’ll notice she didn’t record me saying “remind me” so perhaps she didn’t understand the rest of my message. But the next error was all Apple’s.
20. 10:22am: I took a screenshot of reminder not working on the watch but it never came into Photos (see 1:26pm)
21. 10:24am: I got in the car and hit play on my phone and it started playing a song by something called Weezer. You may recall the last thing I was playing was a podcast in Overcast. You may also recall that I don’t listen to Music.
22. 10:48am: I copied part of one of these notes to paste into a tweet on my Mac. Attempting this delicate maneuver caused both Tweetbot and Notes to hang up, then Excel jammed up just in solidarity. When I force-quit Excel, Microsoft Error Reporting hung up. Seriously. Also, restarting both Tweetbot and Notes causes them to hang again. I couldn’t quit anything. I couldn’t even get to the Apple logo to restart because all I had left was a spinning pizza wheel. I was forced to hold down the power button on my laptop for a hard reboot. Remember, this is on a 16” MacBook Pro with a clean install of macOS Catalina with zero migration of applications; every app was a manual install. This is not my fault.
23. 10:56am: After the reboot, my Mac thinks the internal display should be the primary display, even though the external display was in charge before the hard reboot.
24. 11:25am:

Backblaze popped up asking for me to enable location services so they can help me find my Mac if it’s stolen. The popup had two buttons. One said Open Location Services. But the other button says “ERR_cancel_button_text”. I’m thinking that’s not exactly what they meant to show me.
25. 11:54am: Spotlight failed to look in Contacts when I entered a name into it. I verified that Spotlight preferences should be searching Contacts. Oh and while we’re at it, Spotlight won’t find any preference panes, even though System Preferences is also on the list of things to search. Remember this is on a clean install of macOS Catalina?
26. 12:00pm:

I had a Safari window open to appleid.apple.com. I left it alone for a while so it disconnected me as a security measure, which is great. However, the window asked for my fingerprint but I didn’t need to go back in. I later realized that I could not close that window, I couldn’t switch to any other tabs and close them either. I could, however, open new windows that work just fine. I could not, however, quit Safari. I finally resorted to force-quitting Safari. Please note that I rebooted this Mac less than an hour ago. And it’s only noon.
27. 1:26pm: It took 13 days for my full-size images in my Photos library to download to my new Mac (it’s a whole story in itself). Throughout this process, syncing of photos between my Mac and iOS devices worked flawlessly. Last night the download finally finished on my Mac. Now I have 4 photos on my phone that aren’t syncing over to the Mac. It says “Updating 3 items” so it’s not even correctly counting what it’s not doing.
28. 1:39pm:

After rebooting from the earlier lockup, I tried Excel format painter again. It worked! Once. Not working again, so I tried by using the menus. I discovered that “Paste Formatting” is greyed out, and no manner of menu picks including the option key lets me do anything but a regular copy. I thought I’d try Excel help, which is nearly always very helpful. But help is a white window with a spinning gear. For more than 5 minutes.
29. 4:45pm: I took an extensive break from tech and went for a walk. 1.71 miles into my 3-mile walk, with a heart rate of 103 BPM, Apple Watch asked me if I was done with my workout. Uh, no, I’m not.
30. 5:40pm: I was typing in a name for an image in Apple Photos and partway through, the keyboard lost focus, and started bonking as I typed. I had to move cursor back into the field so I could finish typing. Note this is on an external keyboard so I’m not accidentally dragging the cursor by inadvertent trackpad touches.
31. 6:13pm: Hindenburg Journalist wasn’t obeying its own settings on which speakers to use. Had to set it to the wrong output and then put it back.
32. 6:20pm: Hindenburg Journalist crashed when I tried to arm a track (which is necessary in order to record.)
33. 8:58pm: AppleTV search worked once but when we went back to search again it wouldn’t let us back into the search field. Luckily the iPhone asked if it could help and the Remote app let me type in the search field.
34. 9:24pm: On Apple TV Music, we selected Frank Sinatra’s Oh Little Town of Bethlehem and it played Ray Conniff singing some completely different Christmas song.
35. 9:31pm: Apple Watch Series 5 went into low power mode. 10:06pm iPhone 11 Pro went into low power mode as well. I never get to low power mode on the iPhone 11 Pro and almost never on the Series 5 watch.
36. 11:33pm: My Carbon Copy Cloner backups started running every hour when my Mac was supposedly sleeping. The backups are set in Carbon Copy Cloner to not run if the Mac is asleep. This doesn’t appear to be a Carbon Copy Cloner problem, but rather the fact that my Mac doesn’t sleep through the night. Remember, this is a clean install of macOS Catalina…

To review, let me list the devices and apps that gave me grief, all in one day:

I can’t help but hear Steve Jobs saying during WWDC 2011: “It Just Works.”

4 thoughts on “It Just Works!”