Wing, also known as “Bart’s better half” brings us this guest review. 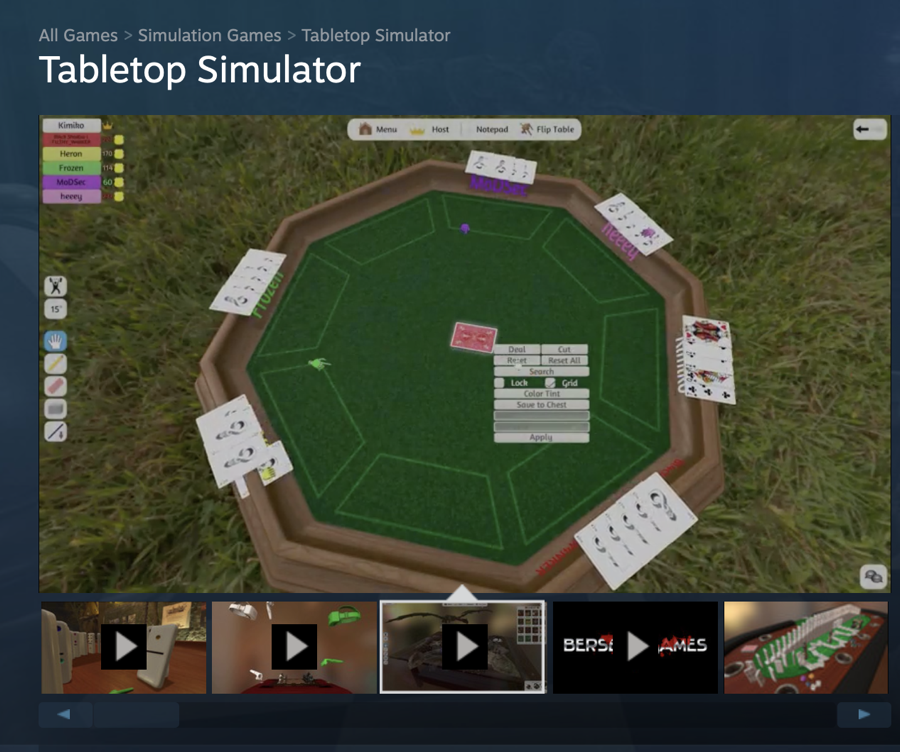 Social distancing being what it is has meant that everyone, particularly those of us in the vulnerable categories, has had to find alternatives for our social needs. Thankfully we live in an age of unprecedented connectivity and the internet provides us a plethora of solutions. One of the options that I’ve dusted off is Tabletop Simulator from store.steampowered.com/…. I picked it up on Steam during one of the sales, but the full price is only 20 euro, probably about the same in dollars.

At its core, Tabletop Simulator is a physics engine that lets you simulate a table and things that you might put on a table. Which doesn’t sound like much in and of itself. But one of my gaming troupes has decided to use it to play a tabletop RPG. The game comes with built-in models that you can use, and you can download more from the steam workshop or buy them as DLC. With TTS, out of the box, you get enough tiles to build rooms and put down monster tokens and give players dice and figures, which is basically all you need to run a figure based RPG in person. So it’s an excellent facsimile for the real thing.

Each of the players needs access to a copy of the software, one player sets themselves up as the server and invites them in, or hosts for the wild. The interface is relatively straightforward, though there are countless tutorials online for how to build better dungeons. Without knowing the first thing about how the system works I’ve just put together a primitive dungeon. You place tiles on the board, right-click them and toggle their lock setting, place monster tiles down on them, it’s relatively straight forward.

But if RPGs aren’t your thing, and they’re kinda niche, the game has some built-in board games like Chess and Go, it has cards and chips so you can play poker or blackjack. And because you have your personal hand, you see your cards only. There are thousands of downloadable board games on the Steam workshop with nearly as many resources for RPG games.

I do have a few caveats. The game works better with a mouse, particularly if you’re on a laptop. Picking something up involves clicking and holding, if you want to pick up more than one thing, you right-click while holding left click. Which is tricky on a trackpad. Now, there’s a keyboard command for it as well, but that just means you need to know one more thing.

I had a lot of screen tearing, which is where one part of the screen updates but not another if you game regularly you’re probably familiar with this, so I just had to turn on VSync and the problem disappeared.

TTS is just a physics simulator. It doesn’t enforce the rules unless someone does all of the programming work, and while it has a robust programming language, LUA, I haven’t touched it and I don’t know any LUA so I can’t comment beyond that it exists.

If you own a copy but haven’t played it, now is the time. There are thousands of resources on the Steam Workshop that you can check out. So happy gaming!