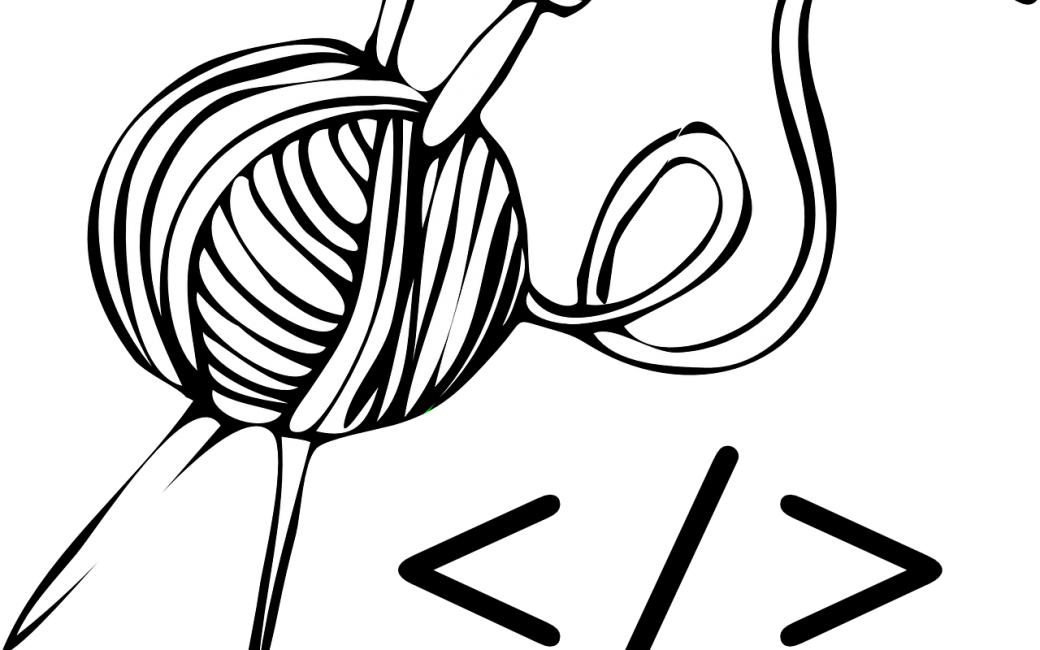 After I had written most of this article, I realized that I may have come up with a subject that interests absolutely no one but me. You see, this is about knitting like a programmer. How many of you both program, and knit? I mentioned this problem to Bart and he explained that there’s a long history of the intersection of programming and textiles. Bart went on to explain that programming punch cards have their origins in weaving.

The machine was controlled by a “chain of cards”; a number of punched cards laced together into a continuous sequence. Multiple rows of holes were punched on each card, with one complete card corresponding to one row of the design.

So maybe this intersection of programming and knitting will be of some interest after all.

I’ve been programming for a few years now, but I’ve been knitting since I was very young. I actually taught myself to knit when I was around 9 years old, learning from a book. I can distinctly remember learning the stockinette stitch at the kitchen table and being SO frustrated until I figured out that the dumb instructions didn’t tell you to move the yarn from back to front to back as you switch from knit to purl and back again. Once I figured that out it was smooth sailing.

I haven’t knit for a very long time, keeping my fingers busy with crocheting and cross-stitching for at least the last 25 years. But my daughter-in-law Nikki chose a knitted pattern for the baby blanket I’m making for my future grandson. It was time to get back into the game.

Execution of some knitting patterns wouldn’t benefit from thinking like a programmer, but the particular pattern I’m working on cries out for it. Knitting patterns (and crochet patterns for that matter) will give you row by row instructions, but whenever a complex bit is repeated, they’ll often throw an asterisk on either side and say “repeat from * to *”.

In programming, if you’re going to repeat something, you make it a function so you can repeat it predictably. Already we can see that knitting and programming have something in common.

The problem I was trying to solve was that this pattern is written in a very complicated way. This resulted in constant mistakes on my part until I started to break the pattern down in a different way.

That photo is critical to figuring out the pattern, because down in the weeds of the instructions, it’s very difficult to see this big picture view I’ve described.

The pattern describes the sets in a very complex way. Let’s say you’re on row 26.

I started by creating two lookup tables but it was like doing two coordinate transformations in your head! I tore out many rows many times.

That’s when I started to think of it as functions and it became much clearer to me.

Let’s think of the check and stripe blocks as functions, because inside each of those blocks, we have a set of instructions. We’re going to call them stripeBlock and checkBlock.

And yes, I’ve had a lot of trouble writing the knitting term purl because it’s spelled with a “u” and my brain really wants to write it with an “e” like the programming language.

Now let’s dig down inside our two functions. The instructions for the stripeBlock function defines explicitly what to do on rows 1-8. All of the even rows (2, 4, 6, and 8) are a simple purl stitch all the way across.

So we could think of the purl rows (the even ones) as their own function, which we’ll simply call purl.

Rows 1 and 5 are both a simple knit stitch, so we’ll define a knit function for those rows.

That leaves rows 3 and 7 for the interesting functions. Both rows 3 and 7 are what creates the look of the stripe in the pattern. It’s what I’d call a bumpy-looking row created by alternating knit and purl. But to make it a little more interesting, rows 3 and 7 are offset from each other so the bumps don’t line up. For that reason, we have to define two functions, which we’ll call stripe3 and stripe7. In the function stripe3, we’re going to knit 2, but then 15 times we will purl 1, knit 1. Well, that sounds like a for loop in programming to me!

The stripe7 function is just slightly different so that we get the offset I was talking about. Instead of starting with knit 2, it starts with knit 1 and ends with a knit 1, but it has the same for loop inside. If I was refactoring this to clean it up, I’d probably define our little for loop of p1, k1 15 times as yet another function.

Now the reason it’s helpful to think of this knitting pattern as this series of functions is that this group of 8 rows gets repeated 5 times for a total of 40 rows in one stripeBlock.

Putting the stripeBlock function together then, we need to repeat our pattern of 1 to 8, five times.

This would be a great stopping point if the checkBlock repeated at the same rate internally as the stripeBlock, but nooooo, the inventor of this pattern made them repeat at different rates.

I know you’re really hoping that I’ll go through the pseudo-code for the checkBlock but for brevity, I’ll just put it in the shownotes.

Understanding this pattern at this fundamental level was critical to being able to even tell if I’d messed up. But it doesn’t help me actually knit each row. I can’t run these functions. I have to still create every stitch one at a time.

I pulled out one of my favorite tools when working on crafts: Notability. I wrote out all 40 rows of this first set by hand using the Apple Pencil on my iPad Pro.

I wrote the stripe instructions in green for each row and the check instructions in red. That turned out to be invaluable in figuring out where I was. Since I’d figured out the pattern in a programming way, once I had 20 row numbers written out, I could copy and paste between rows to reduce errors. For example, in the checkBlock, rows 1, 3, 11, and 13 are the same so I could just write it out once, copy, and paste it three times.

Once I had the 40 rows written out for the first set of four blocks, I could finally start knitting the pattern predictably. I sit in my easy chair with my iPad Pro in the Magic Keyboard as a stand. I open to Notability while I knit, and use the Apple Pencil to check off each row. On a few occasions I’ve been knitting in the car, and the iPhone is a more practical tool for that environment. Notability works on both platforms (and the Mac) and syncs notes perfectly. I can zoom way up on Notability on iPhone and use my big, fat fingers to make my little checkmarks and it works surprisingly well.

I’m not going to pretend that I’m not making mistakes with this process, mind you, but I have a much better feel for the pattern with the process I followed.

The bottom line is that it baffles me how “normal” people knit. This pattern is rated “Easy”, and yet I find it very complicated. My suspicion is that the difficulty rating is weighted more heavily by the difficulty of the stitches themselves, rather than the entire pattern as a whole. This only has knit and purl in it, no cable stitches, no ribbing, no stockinette, so I’m thinking that’s why they think it is easy.

I’m having fun making the blanket, and while the journey in this kind of craft is half the enjoyment, I can’t wait to wrap it around my new grandson when he makes his arrival.