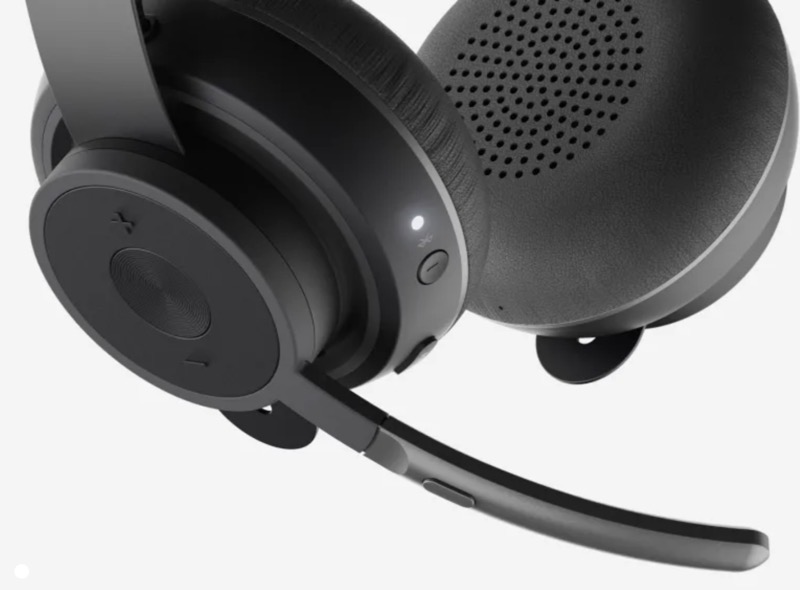 This is Bruce from Tennessee, with a review of the Logitech Zone Wireless Plus headset.

First, what’s the problem to be solved?

I’ve been on distributed teams and doing phone conferences and web meetings for decades, and I’ve historically used a wired USB headset with a boom mike. I preferred the wired USB to avoid the Bluetooth latency and the boom mikes generally do a better job getting just my voice and not a lot of the background noise. And the boom mikes don’t have that scritch-scritch noise that we get with the microphones on the headset cords, rubbing on people’s clothes. A few months ago, after the several months of everything being an online meeting, and tripping over my long headset cord, I decided I needed more mobility and I’d try moving to a wireless headset.

I tried and returned a couple of Bluetooth headsets that just didn’t work for me. Then I saw an article that talked about a flip to mute feature with some boom mikes. When you flip the boom up, away from your mouth, the headset itself mutes the microphone. This is apparently a thing in the gamer world, which makes a lot of sense. After doing some searching, I found the Logitech Zone Wireless headset as something with good reviews and this feature. I chose the Logitech Zone Wireless Plus model, which comes with a USB-A dongle and can also work over Bluetooth. It retails for around $230 US at a range of vendors, and I’m thrilled with this.

I mostly use mine with the dongle, since that makes it easy to move the headset between computers. I have a work computer and a personal computer at home, and I can simply move the dongle from one computer to another to change which computer is using the headset.

The flip to mute feature is great. If I need to cough or take a drink, I can quickly flip the mike up and the microphone mutes itself. Pull the microphone back down, and it unmutes. For Microsoft Teams and Zoom meetings, flipping the mike up also mutes me in the app, and pulling it back down unmutes me in the app. The dongle has a white light when I’m unmuted, and a red light when muted. When I’m in meetings with the camera on, pulling the mike down is also a signal to others that I’d like to speak, which has been useful.

The flip to mute, combined with the mobility, makes things a lot better on those back-to-back-to-back-to-back meetings. I can be in a meeting and get up to go to the kitchen to get a drink. I’ll mute the microphone so people don’t hear the noise, but I don’t have to run back to my computer to unmute when something comes up where I need to unmute. I’ve used a USB extension cable to bring the dongle out to just under the front edge of my desk, so the radio signals are pretty well unobstructed, and I can pretty consistently get a good 40 or 50 feet away from my computer with no noticeable degradation quality.

There are other features that weren’t in my problem to be solved, but which have really proven beneficial.

The headphones have active noise cancellation. They’re an on-the-ear style, rather than over-the-ear, so it’s not great noise canceling, and I don’t think they’d do a great job on an airplane. But they do knock down the area noise of the other household activities.

The Logi Tune software provides controls for the microphone gain and for sideband. The sideband feature feeds the microphone signal back into what you’re hearing, and you can control the percentage. Sideband and clear control of the microphone gain has been wonderful. My wife reports that I’m speaking in a much more normal tone of voice when on a web meeting, and I’m experiencing a lot less vocal fatigue at the end of a day of web meetings. I really do feel like that’s helped a lot to make my speaking more conversational in these kinds of meetings.

The microphone quality is good. I’m using it for making this review, so you can judge for yourself. My colleagues report that I’m usually one of the clearest people on a call and they report not hearing keyboard noise when I’m typing. If I have a window open on a windy day, they do report some wind noise, but they didn’t hear the neighbor’s leaf blower or my wife vacuuming. I’ve done some testing with Voice Memos and I can hear the typing, but it’s not obvious. And I’m not talented enough that I can type much and talk at the same time, so the easy mute and unmute also makes a big difference with not distracting others in a meeting with my keyboard noise.

The comfort level is also good, for an on-the-ear style. I’d generally prefer an over-the-ear for long-term wearing, but I was able to use some Bruce force and spring the band out a bit, and it’s now comfortable enough on my big head. I’ve worn it for most of 10 hours straight and didn’t come away with a headache, but it was a bit of a relief to take them off.

The battery life is good — definitely enough for all-day use. I was down to 30% after that 10-hour run, so the headset could have lasted longer, even if I was done.

Charging is easy. You can charge with a standard MicroUSB cable, and the headset supports wireless charging. I simply set my headset down on a Qi wireless charging pad when not in use, and it starts charging right back up. I really like not having to fuss with a charging cable.

The dongle on the Wireless Plus model can theoretically be used to also control a Logitech Keyboard and a Logitech Mouse. I’ve not tried that, so I can’t report on just how fiddly that might be. There is also a Zone Wireless (not plus) model that’s about $200 retail — so $30 cheaper than the plus model. The base model only works with the dongle and I think that dongle only works with the headset — you can’t use it to control a mouse and keyboard.

The headset folds up somewhat, so it fits better into a knapsack. The earpads don’t turn, but the on-ear style means that it’s not quite as bulky as most over-the-ear headsets.

I’ve not made particular use of the Bluetooth features, but I’ve made a phone call or two with it, and that seems to be just fine. I really like the simplicity of moving the dongle between devices to move the headset. It’s just way less fiddly and faster than fussing with Bluetooth menus.

There’s a button on the left earcup that does play/pause if you’re listening to music, which would be useful for some people.

Overall, I’m completely thrilled with this purchase. It’s not the most comfortable headset I’ve used, but I think it’s about as comfortable as an on-ear headset is going to be for me. I’d love to have some headset mounted controls to change the sound volume to better handle those meetings where one person has a really hot mike and someone else is just barely audible. But that’s really the only negative thing I’ve got to say about the Zone Wireless Plus headset from Logitech.

Thanks, and Stay Subscribed.