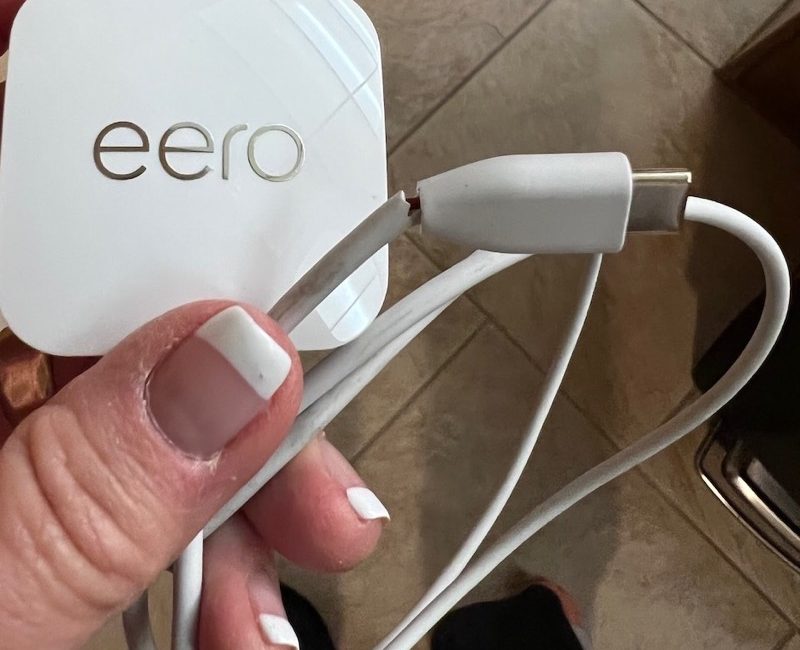 We often visit our daughter, Lindsay, and her family. Because we go there really often, I like to make sure our electronic life is as smooth as it is at home. Lindsay is an accomplished geek in her own right, so she enjoys the improvements as much as we do.

Lindsay’s first house was very small, and I outfitted it with a two-unit Netgear Orbi mesh system. For this little house, it was overkill for sure but it worked perfectly. But when she moved into her new house, the two-unit Orbi system wasn’t up to the job.

Her new house is a long L-shape with multiple levels, including a basement. The cable connection comes into her home in her den, which is, of course, at one end of the house. Even with the second Orbi at the corner of the L, the signal didn’t reach to their bedroom at the opposite end of their house. The distance from the den to the L corner was just too great.

I upgraded her house to the second generation eero Pro which was the bee’s knees at that time. This is the version that has three full-sized router units with tri-band radios, which means it has a 5GHz band dedicated to the backhaul. This allows your devices to connect at 5 or 2.4GHz, and then the traffic between the routers to also travel at 5GHz speeds. There are more advanced versions of the eero now, even one supporting WiFi 6, but this is a terrific system. With a unit placed not quite to the L corner and another one in their bedroom, the gateway router in the den was able to flood that giant house with WiFi.

All was well for a long time, but recently things started to degrade. The degradation was intermittent, with the WiFi working perfectly fine unless we were visiting. The slowdown was pretty noticeable.

Lindsay called her Internet Service Provider, Comcast, and they asked her how many devices she normally had on her network. Lindsay responded, “I don’t know, around 25?” to which the genius on the phone said, “Oh, you cannot have more than 10.” Um, what? Is this 1992?

When we’re at her house, there’s a smidge more than 10 devices sharing WiFi. The last time we came to visit Lindsay, she was still at work when we arrived. She sent me a text saying that she always knows when we’ve arrived at her house, because her notifications from eero go bananas repeatedly saying, “A new device has joined The Tondee Ranch”. She sent a screenshot and it’s pretty hilarious.

When all of us are at her house, simply surfing the web becomes painfully slow. I’m talking five seconds to load a web page. For some reason, streaming video on the Apple TV works just fine. I’m thinking it effectively buffers the data so intermittent connectivity isn’t a problem.

It got so bad on our recent visit that we were starting to use our phones to tether to be able to do anything at all. It was time for me to diagnose the real problem. My good friend Pat is a certified Apple Consultant and installs a lot of eeros for her clients, so she’s my go-to when it’s time to noodle an eero question. I pinged her and described the situation and she gave the classic suggestion to turn it off and turn it back on again. I pulled power from the gateway unit that was attached to the modem. I probably should have unplugged them all and given them a group time-out, but I only pulled power from the main unit.

This didn’t fix the problem. Next, Pat and I discussed emptying caches, but since it was affecting every single device from iPhones to iPads to Macs, I didn’t pursue that path.

I was starting to wonder whether we actually did have too many devices for the eero system. A quick search of the eero support website found this in the frequently asked questions section:

How many devices can one eero support?
One eero can support up to 128 devices (you read that right). That’s one very connected home. However, if those devices are heavily using the Internet for activities like streaming video, you’ll probably see best results using up to 30 devices with each eero.

Even with Lindsay’s Ring doorbell and floodlight cams outside the house, her Wyze cams and baby monitor cam inside the house, her 4 Apple TVs, her connected oven, her Sense solar monitoring system, and all of our computers and mobile devices, we weren’t anywhere near 128 devices all on one of the three eeros, and we were only streaming on one device at a time.

So it wasn’t the number of devices, but somehow our arrival with all those extra devices really seemed to be affecting the performance of the network.

Pat had me check to make sure that I didn’t have both the modem and the eero router handing out IP addresses. You can end up in a condition called double NAT or double network address translation. The modem in this case is a Netgear 3500 which is about as dumb as you could hope. I don’t think it even has a router in it because there were literally no controls for assigning IPs in the web interface, even under the Advanced tab. That ruled out the double NAT problem.

Pat also suggested that I check DNS because it seems to always be a DNS problem. DNS stands for Domain Name System. This is a system that does a lot of things, but one of them is translating the names of websites into the external IP addresses for those servers. That’s a simplification, but if you’re not using a well-managed DNS server to make those translations, things can get slow. You may be using the DNS servers from your Internet Service Provider, which are rarely well-managed. You can choose a different DNS, and our recommendation is to use Cloudflare or Google’s DNS.

Pat suggested that I contact support, which is good advice. The last time I had a networking problem she suggested I contact support, and they were fantastic. The rep stayed on the phone with me for a very long time while we diagnosed and then fixed the problem. I wasn’t quite ready yet to pull the support parachute on this problem though.

I went back to the idea of unplugging the main gateway eero, when I noticed something curious. The power supply connects to the eero via USB-C. The insulation on the cable right where it joined to the strain relief of that USB-C connector was cracked and broken. I couldn’t tell whether the wires inside were actually broken but it seemed like it wasn’t a good idea to keep it this way.

Unfortunately, the other end of the cable was hard-wired in, so to fix that problem I needed both a replacement charger that would provide 24W of power or more and a new USB-C cable.

I travel with a GaN 65W charger with a long USB-C cable for charging my Mac, iPad Pro and to recharge my travel battery. I swapped out the frayed cable and charger on the eero with my GaN charger and new USB-C cable and then waited while everyone jumped on their devices.

The network immediately started performing perfectly. We played with our phones, Macs, PCs, while Forbes played games on his iPad and we had no slowdowns even with TV streaming on the Apple TV.

Since the 65W charger was overkill, and since I actually need to use the GaN charger, I went on a hunt for a more suitable replacement. Lindsay and I found a Samsung 25W charger for $16 at Best Buy along with a 6-foot Insignia braided USB-C cable for another $9 that were in stock and available for pickup same day.

I swapped in the Samsung charger and Insignia cable and the WiFi connection continued to work flawlessly.

Now the question is, why did the frayed cable cause intermittent networking problems only when the number of devices went way up?

We noodled this and thought perhaps the gateway router connected to the modem was limping along with a compromised signal, but the 5GHz backhaul was working well enough to push us to one of the other routers in the house. We were all in the den together when the poor performance occurred, which could be accounted for by being connected on a far away router.

In my opinion, the more likely possibility is that it wasn’t the frayed cable at all, but that a second reset of the router system that lasted quite a bit longer actually cleared out whatever had gotten the eero’s panties in a bunch. A $24 replacement power supply and cable was still a good investment because even if this wasn’t the root cause, it would eventually be the root cause of some problems.