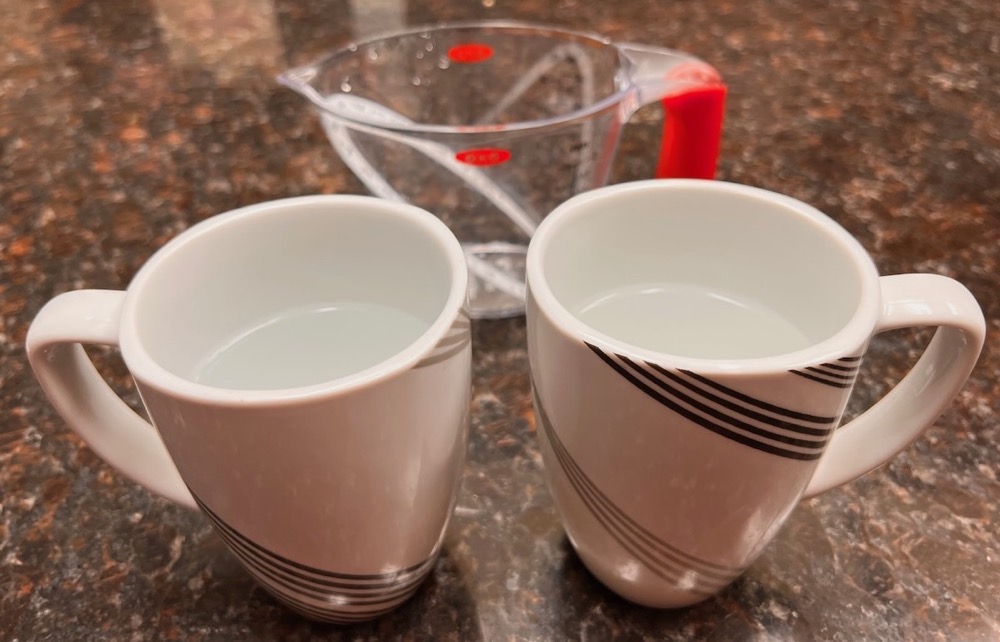 Recently, our daughter Lindsay was visiting, and when she heated her coffee in the microwave, she put it in the center of the rotating plate. I pointed out to her that it would heat more if it was on the edge of the plate, as it would pass in and out of the field of radiation. Steve backed me up on this point. She was happy that we schooled her.

Fast forward to a few weeks later when I put a plate off-center in the microwave with a tortilla and some cheese and cooked it for 30 seconds. When I opened the microwave, the cheese that was over the center of the rotating plate was fully-melted, but the cheese near the edge was not.

Could we possibly be wrong? Could the center provide more heating?

Obviously, we could have gone to the Internets to look up the answer, but what kind of fun would that be? With Christmas presents to wrap, decorations to put up, meal-planning for days of guests, packing planning for a trip to see the family, and two podcasts to create to publish early, we set that all aside to do an experiment.

We started with two identical coffee mugs, each filled with exactly 1C of tepid water. While one of the scientists suggested that the other scientist had made the meniscus of the water a few molecules higher in one mug vs. the other, the measuring scientist suggested that this margin of error would not be significant.

Next, we measured the temperature of the water in each mug with our handy-dandy Craftsman laser thermometer, making every effort to set the angle approximately the same into the mug.

In the initial temperature measurement, the two mugs of water were off by several degrees. We theorized that the difference in temperature was caused by the running water changing temperature as it came out of the tap.

We decided to do a stability test and left the mugs on the granite counter for 1 hour and 10 minutes.

After stabilization, the two mugs were at 72.1°F. The next step was to engage in a healthy dialog on when to measure the temperature of the heated mug. On the one hand, it would be best if the temperature could be measured whilst the mug in question was still in the microwave, allowing for as little heat dissipation as possible. One scientist pointed out that she was too short to reliably hold the laser thermometer at an appropriate angle to measure the water inside the mug and still be able to read the display.

The second scientist (let’s call him the assistant scientist, shall we?) pointed out his concerns that the granite would begin sucking heat out of the mug at a rapid rate and thus sully the results. In the end, it was decided that the heat dissipation would be similar for the two samples as long as the temperature was taken as rapidly as possible upon removal of the mugs from the microwave.

We labeled the two mugs appropriately as “edge” and “center”. We placed one mug at the edge of the rotating plate, set it to cook on high for 1 minute, and then immediately measured its temperature. We repeated the experiment with the center mug.

The final results – the center-placed mug heated to 2.6°F higher than the edge-placed mug!

So there you have it. The center heats faster in our microwave than the edge. As scientists, we feel obligated to point out that a sample set of one is not a good proof of concept so if you’d like to repeat our experiment and report back on your microwave, that would be swell.

In the meantime, we’re willing to admit that we were wrong all these years, and our bio-chemist daughter is smarter than us.

5 thoughts on “Center or Edge – Which Cooks Hotter in a Microwave?”