In April 2019, my wife and I embarked on our first overseas trip together in 21 years, to celebrate my 50th birthday. We spent a week in Singapore followed by a few days in Melbourne, Australia on the way home. One evening, a few days into the trip, I started to realise I was already having trouble recalling everywhere we had been and when. I started a note in Apple Notes with a simple bulleted list of the places we had been so far and on which days, then kept that note updated every day for the rest of the trip.

I forget when the next thing happened, but I think it was when I was processing my photos from the trip in the weeks after we got home. The photos brought up detailed memories of our adventures, so I started expanding on the bullet points. Before long, I had moved from simple event recording to something new — storytelling.

As I expanded on my story of the trip, I also began to recall other trips from years gone by. Many of those trips had given rise to stories I have been telling for years. It occurred to me, I could — in fact, should — also record those while I still had some strong memories. Before long, I had listed out all the major trips I had made since I was 17, for both work and pleasure.

It was at this point that my mind crystallised what I was doing. I was writing “My Story.” Mindful that my late father had started a similar process at around the same age, but never got around to completing it, I decided I should make a concerted effort. I settled on the writing app Ulysses and created a new folder called My Story.

The more I thought about the trips, the more I realised other stories existed that did not revolve around travel but were closer to home. Mum and Dad had collated a “This Is Your Life” style collection of information for my 40th birthday, as they had for my siblings before me. I dug this out to get a list of every house I had lived in, every school I had attended, and more. The deeper I went, the more aspects of my life leapt to mind. I started a mind map to keep track of all the big trips and also pets, hobbies and interests, local trips, jobs, people who have influenced me, and more houses.

Then I began to write. I wrote when I was in the mood, and about aspects that came easily to mind. When I ran out of writing time while still in full flow, I entered many brief notes to return to later. Months passed where I wrote little, and then I’d get the bug again and off I’d go.

As I wrote, I would try to remember details like particular locations I had visited, when I was there, and my impressions of places. Then I started digging out my photos.

I mastered scanning strips of negatives — a skill which had eluded me for years — and I started tracking down where many of the photos had been taken. I pored over online maps, trying to match them up with my memory, occasionally realising I had misremembered details, often prompting more memories. I made almost forensic level searches online for dates and to track down places that no longer exist. I sought expertise from online communities. I searched old emails and documents stored in old backups. I spoke to family and friends who had been there too. I went HARD. And I LOVED it.

Since my father’s passing, I have really enjoyed listening to or reading stories about his life, both from when I was present and when not. I also love telling my stories to just about anyone, but I’m writing My Story for my children, grandchildren, and even later generations, who may never hear them from my lips. I still have a long way to go but so far, I have 40 documents covering 13 overseas trips, around 8 local trips, 8 houses, 7 jobs, and numerous other topics. Many of these are just stubs with a title and maybe a few bullet points, but I have amassed over 36,000 words so far.

The end game is to complete a story for every topic I have identified, and then to take the words and plenty of photos and maps and turn them into a book. In the 1980s, one of Dad’s cousins collected lots of family stories and facts going back over 140 years and had them typewritten, then attached photos, official documents, and hand-drawn family trees before photocopying and binding them for any family members who wanted them. They were very popular. I don’t know whether my book will ever be printed, but even as a PDF, I would like it to be a “pick-up” book to browse. 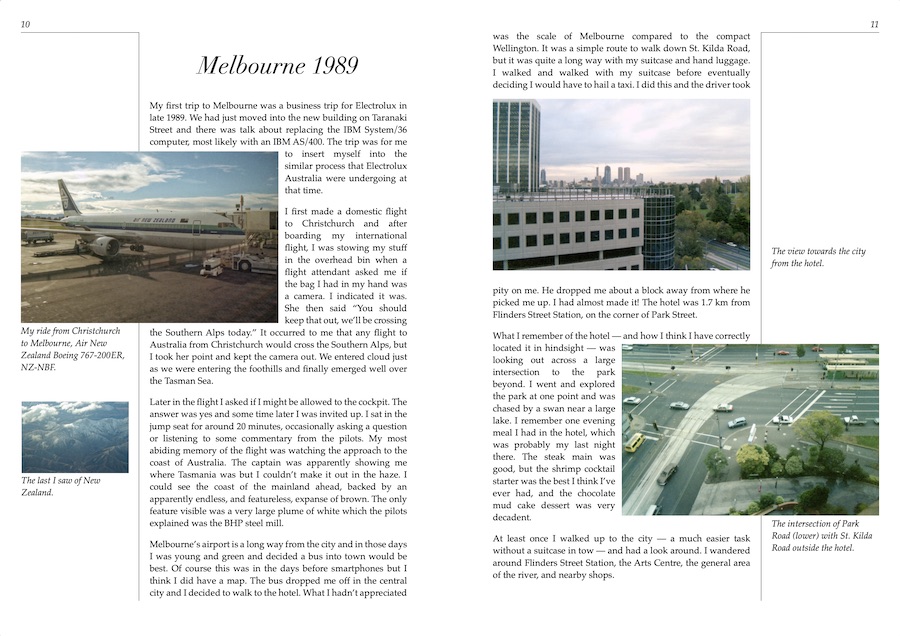 Embarking on this exercise made me realise something else. I know a lot more about my father’s life, and view of events, than my mother’s. She’s still around, so I made it my mission to talk to her about all the stuff from her life that I don’t know, from her earliest memories to when I was a teenager or so. I bought a portable audio recorder to capture these conversations. I’ve only managed one so far but will do more this year. I shared the recording with my brother and sister, from which I have follow-up questions for next time. That ball is rolling.

I would like to encourage everyone to think about capturing their life’s memorable moments as well as those of loved ones, and particularly if you or they are of advanced years. Storytelling has been deeply ingrained in humankind for tens of thousands of years — let’s keep it going.