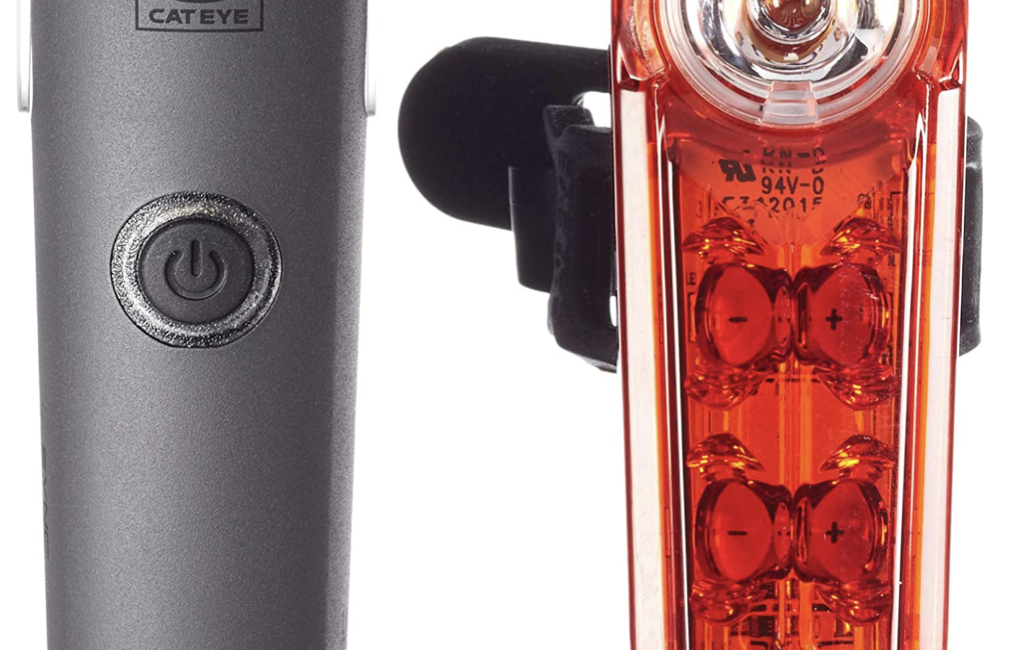 When it comes to cycling safely, I don’t think it’s possible to underestimate the importance of lights. I think everyone knows how important it is to see where you’re going if you’re riding on dark roads, but what a lot of people overlook is the importance of being seen lights at all times on all roads. It’s a well-known fact that drivers often literally don’t see cyclists because our human pattern matching algorithms are far from perfect, and cyclists can blend into the background and roadside clutter. Bright clothing helps, but really, if you like being seen and not killed, you need bright blinking lights day and night.

Because lights are so important, you need lights you can trust. For years I’ve used the same brand — CatEye. All the bikes in our house have standard CatEye mounting brackets front and rear, as do all our cycling helmets. The decades-old standard mounting system with its myriad of options and adaptors is one of the things I love about CatEye. I have handlebar mounts, seat-post mounts, under-saddle mounts, rear-strut mounts, and helmet mounts, as well as clothing clips. One trend that the company has been developing over the last 5 or 10 years has not sat great with me — they seem to be falling in love with removable adjustable rubber strap mounting options. I want to line things up perfectly and fix them in place, not have to adjust everything each time I put the light back on after charging! I do like their other trend though — USB-charging rather than disposable batteries (though I wish it were not micro-USB!)

This all sounds fantastic, where’s the problem to be solved?

Basically, CatEye lights have not been smart devices, and they’ve not cooperated with each other as a team.

Since the last time I bought new lights a year or two ago, CatEye have launched a whole new line of connected smart lights they’ve branded as their CatEye Sync system.

The system has three broad parts — a required smartphone app (available for Android & iOS), a single primary light that acts as a kind of hub, and additional lights that can be used independently as dumb (not smart) lights or paired to a primary light.

At the moment, there is only one primary light available: the Sync Core. It’s a front light with three constant brightness modes (500, 150 lumens, and 100 lumens), a hybrid constant+flashing mode (100 + 500 lumens), and a simple flashing mode. The light takes 3-4 hours to charge, and gives you a big range of usage times from 2 hours at full brightness to 130 hours flashing!

The charging is still MicroUSB 🙁, but the mounting bracket is the same standard they’ve used for literally decades, so it clipped right onto my existing handlebar and helmet mounts 🙂

You can use the light as a dumb light and it behaves as all CatEye headlights have for as long as I can remember. There is just one button, press it for 2 seconds to turn the light on or off, press it once to toggle to the next mode in a five-mode cycle, and double-click to jump to high mode, then single-click to revert to the previous mode.

To turn the light into a smart light, pair it with the CatEye Sync app. The pairing process is wonderfully simple. Open the app, press the plus button to add a device, and follow the instructions — basically, all CatEye Sync lights within range will flash, and you push the button on the one you want to pair, and your phone is now paired to that light.

Once you have a Sync Core paired, you can add additional Sync lights to your system. At the moment, there are three additional models available, all rear lights. There’s the Sync Kinetic which is a large rear light, and a small clip-on light called the Sync Wearable.

I bought the starter kit which includes a Sync Core and a Sync Kinetic, as well as one Sync Wearable. I bought from Amazon’s UK store as a Prime customer, and my total bill came to £92.23 (€110.92).

The Sync Kinetic is a full-size rear light with the usual array of flashing and solid modes, but it also has a party trick — it has an accelerometer, and it can automatically flip in and out of full brightness mode when it detects braking, which is really cool! CatEye call this Kinetic Mode, hence the name of the light. It has flashing modes designed for day and night, so I’ve been using it in daytime mode with Kinetic Mode enabled. The charge time is about 2½ hours, and the battery life varies between just 1½ hours if you leave it set to constant at full brightness (40 lumens), to 30 hours in day-time mode with Kinetic Mode turned off. If you use daytime mode (50 lumens flashing) with Kinetic Mode turned on, and you trigger the accelerometer 60 times you should get 7 hours on a charge.

The real magic comes when you pair the Sync Kinetic with the app. Now, turning the Sync Core on or off controls both lights! The Sync core’s single button has a red or green LED. If it’s a sold green then at least one additional light is successfully connected, and all devices have more than 20% charge. If the light stays green but starts flashing, then one of the connected lights is running low on power, and if it turns red and flashes then the Sync Core is low on power.

So far, so good. But, it’s not all roses. Not only does the Sync Kinetic not use the standard rear-light mounting bracket CatEye have used for years, they don’t even provide an adaptor like they do for some of their other lights. This light can only be added using a bloody annoying rubber strap. 🙁

The Sync Wearable is similar to the Kinetic and even has the same cool accelerometer feature. However, it’s physically smaller, circular, and designed to be clipped onto clothing rather than directly to the bike, though it does come with a rubber band for clipping it to the seat post. It charges as quickly as the Kinetic (2½ hours), has the same modes with the same brightnesses, but has fewer actual LED bulbs, and a slightly shorter battery life of just 6 hours in daytime flashing mode with 60 braking events.

Again, like with the Kinetic, there is no adaptor to connect the Sync Wearable to the standard rear mount, and in my experience, the clip for clipping it onto clothing is a pain in the backside to actually clip on and off. The thing is round and smooth and just wants to shoot out of your hand and hit you in the face!

All of my testing has been during the summertime, so I’ve been using my three lights in their daytime modes, and they work as advertised. Each day I press the button on the Sync Core for 2 seconds and all my lights come on. They all remember the last mode they were in, and they do their thing until I get home and power them all down in one go by pressing and holding the button in the Core.

I did end up cycling late enough one evening that I used the flash + constant mode on the Core, and I was happy to find that changing the mode on the Core doesn’t change the modes on the Kinetic or Wearable, it’s just the power and power off commands that sync, which is good.

I can also verify that the status LED works as advertised. I intentionally let the batteries run low on the Kinect one day and the Wearable the next, and in both cases, the constant green LED on the Core started to blink when the connected light got down to 20% battery remaining.

According to the docs you can have up to 7 connected lights, but I’ve only experimented with a set of 3 (since that’s all I own).

I’ve only tried the iOS version, and it works fine. It does what the blurb says it should, and it does it well. But, I can see a lot of room for future enhancements all the same.

Firstly, the pairing process is easy. Secondly, the app shows you the current status of all connected lights right on the home screen, including a big, clear easy-to-read battery indicator for each. It also tells you the connection status, and if any one of the lights is not connected to the phone, it shows the last date and time the phone saw the light so you know how stale the battery status is.

The home page also gives you a big power button that’s basically a software version of the single hardware button on the Sync Core. You press and hold for 2 seconds to power all the lights on or off. To my surprise, you don’t seem to be able to change the mode on each individual light from the app. Or, if you can, the UI is not discoverable enough for me to find it. What you can do though is disable individual modes on each light, so if you only ever want to use 2 of the five modes, you can disable the three you don’t want, and then the button on the light will only toggle between the two you left enabled. You can also enable or disable Kinetic Mode (the accelerometer thing) from within each light’s page in the app.

Just before recording this segment, I found a setting in the app to enable notifications on your phone when one of your batteries runs low. I’ve enabled it, but I’ve not had a chance to see how well it works yet. Assuming it works as advertised, and assuming the notifications get pushed through to my watch, I expect this will be a very useful feature indeed!

Does it Solve the Pain Points?

But, there is one downside. Neither of the available rear light options can be connected to the standard CatEye rear mount, not even with an adaptor, so you simply have to use the rubber strap for the Kinetic, and a rubber strap or cloths clip for the Wearable.

Finally, I’m left with one point of confusion — the manual says you can have up to 7 lights, but when adding lights the interface made it look like I could only add one of each type. It’s also not clear from the manual or the site which combinations are supported. Can I have two Cores for example? I’d like a front light on my helmet, and one on my handlebars, is that possible with the current range which only has the Core as a front light?

Given how long-lived many of CatEye’s previous standards have been, Sync is still a very new product line, so I imagine we’ll see it expand significantly in the next few years. If I were calling the shots over at CatEye, this is what I’d like them to do:

Even though this system is still in its infancy, I think it’s ready for real-world use for even hard-core cyclists like myself. The level of reassurance offered by that single solid green LED that means that I know I have at least one working rear light is totally worth the price and the current compromises! And, I think we have every reason to expect this range to expand and improve, so your experience is only likely to improve from here on out!