I started in photography with a Minolta X700 in 1978. The day finally came when set aside my trusty camera for the sexiness of digital with the Nikon 950. I didn’t actually get rid of my Minolta because I loved it so much. Time marched on and I went through a series of point and shoots but I got back to my SLR (Single Lens Reflex) roots with the Nikon D40. I was seduced by Bart and Kirschen getting the Nikon D5100 eventually and with Dorothy standing behind me urging me to upgrade so she could buy my D40, it was an easy choice. Knowing that your camera is going to a loving home makes the decision easy. I think we develop emotional attachments to our cameras because it was through the camera’s eyes that we’ve witnessed the events in our lives, so they’re a part of that experience. Or maybe I’m just weird that way.

I had Chris Marquardt from tipsfromthetopfloor.com on the show about a year ago to talk photography with me and I grilled him about these new fangled mirrorless cameras. He talked me out of thinking about them, mostly because they were slow to focus at the time.

But then David Allen (@wizardgold) came on my show while we were in New Zealand and he spoke of the wonders of mirrorless cameras like the Sony NEX-6. He didn’t just push the idea, he continuously shows these amazing photos he takes on Google Plus. Then Pat Dengler (yourmacdoctor.com) came over and let me play with her NEX-7 in my own little hands. I was seduced by how small it was and I knew how great the photos were from her and David. However, the Sony menu system seemed confusing to me. I can’t put my finger on exactly why, like a button in the wrong place or strange terminology, but it just didn’t feel intuitive.

I had the bug and it was time to start doing some research. My favorite site for comparing cameras is called DP Review, at dpreview.com. You can read full reviews that are really detailed and do side-by-side comparisons of different cameras to help narrow down the options. One problem though is all the different terminologies here that in some cases mean the same thing. For example, micro four-thirds cameras, also called four-thirds, are mirrorless, but all mirrorless cameras are not four-thirds. This makes searching for cameras difficult. I think I tweeted that I was on the hunt, and Steven Goetz (aka @goatman) volunteered to help me spend my money.

One of Steven’s best pieces of advice was to make sure that the camera I was considering had a lot of lens options. It never would have occurred to me that because these cameras have different mounts, some don’t have as many options as others. He also told me that the Sony NEX6 while a great camera did have menus that confused some people, so they redesigned the menus for the Sony A6000. Being a Nikon girl, I took a look at the Nikon 1 series. I went to a local store where the guy showed me the Nikon 1 V2, and I really liked how it felt and the menus seemed intuitive. However, he said I shouldn’t buy the V2, because the V3 was coming out any minute now. That created a new problem – when would it be out so I could touch it and play with it? I checked everywhere and they had it for pre-order, with a delivery date of April something, but it was already May and it wasn’t out yet.

At this point I wrote to Antonio Rosario from switchingtomanual.com who’s been on the podcast before. I figured he’d give me some good advice, and I knew he was a Nikon boy so I hoped he’d tell me the Nikon V3 was worth the wait. I was right that he gave me good advice, but he did not encourage me to go with Nikon. He doesn’t feel Nikon is putting their best efforts into their small cameras and that for the price he’d be nervous that they’d continue with this line. He gave me great explanations about whether to care about certain features:

After all of this great advice on the more obscure features, he did something delightful – he gave me a list of 5 mirrorless cameras he would consider: three Fujis, a Panasonic, and an Olympus. I had the Nikon and Sony I’d been considering already, and I saw some awesome pictures Andy Ihnatko took at WWDC with another Olympus, so I had 8 cameras to compare.

Now I’ve got something to work with. I asked DPReview to compare the 8 cameras, and it spit out a plethora of specs for me. As I looked through the giant list of comparisons, I realized that some things were more important to me than others so I created a Google Spreadsheet for the results I cared about. For example, the main reason to make this move is size and weight, but some of these mirrorless cameras can still be a bit big, so volume was a number I calculated in my spreadsheet. 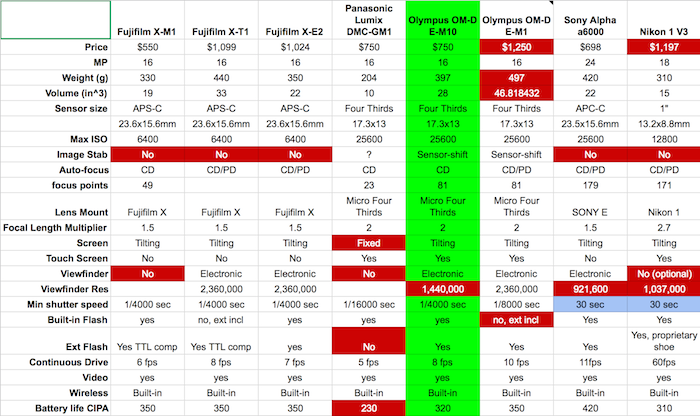 Both the Nikon D40 and D5100 I owned did not have built-in image stabilization. Not a huge deal because you can buy lenses with image stabilization, but you’ll pay more for them. For that reason I considered image stabilization as a criterion as well. I wanted a viewfinder, which knocked out one of the Fuji’s and the Nikon and the Olympus Andy used (plus it was 25% bigger bigger in volume). I won’t go through all the gory details because if you’re really into this you’ll want to pour over the details of the spreadsheet. The final criterion though had to be price.

After weighing all the criteria I decided to go with the Olympus OM-D EM-10, which lists for $700 for the body only, but our local store had a Father’s week sale going on where for $800 and no tax you got the camera along with the kit lens, which is a 14:42mm (28:84 equivalent) f/3.5. It’s as wide angle as I like but I want a bigger zoom eventually but that research will have to wait.

I believe in buying at brick and mortar stores if you test at brick and mortar stores, so I actually would have been willing to pay a bit more for the camera because my local store let me touch and hold it before plopping down my hard earned cash. I have to say, I fell in love immediately. Where the Sony menu system sings to others, the Olympus menus are much more intuitive to me. No slam on Sony, just that our brains work differently so it’s awesome that we have choice. I have to say there are a LOT of menus on this camera so I can’t pretend I’ve mastered them all but I was able to quickly figure out how to get into Aperture priority, adjust my exposure compensation and all that.

The E-M10 is 70% of the weight of the Nikon D5100, but less than half of the volume. This is the reason to buy a mirrorless camera. The camera you can easily carry around is the one you’re going to use. Time will tell on whether I feel I’ve sacrificed much but spec-wise there’s pretty much nothing better about the DSLR vs. the mirrorless camera I’m comparing.

There are soooo many things to like about this camera that I didn’t even think about before purchasing:

Over the years I’ve gotten updates from Apple that refer to Camera Raw support for different cameras, but I never paid any attention to them. Now I care deeply because Apple doesn’t yet support the RAW format from the E-M10. I learned a lot about why this might be by asking questions over in our Google Plus Community. I was confused because the E-M1 is supported and so is the E-M5, so why would the E-M10 have yet a different RAW format. Between Bart, Steven, and George I think I understand now why that might be.

I also found in the Apple Discussion Forums, Sokolov Stas posted a link to an EXIF script tool that edits your EXIF data to trick Aperture into thinking the photos were taken on an E-M1 instead of the E-M10. As soon as I ran the script I was able to pull the photos in. He said to navigate to the folder enclosing your photos and run a command I’ve dropped into the shownotes, and presto change, there will be two of each file, one called _original and a new and improved version that Aperture will recognize.

I do understand that there may be some funny business with the photos because of this but so far the photos look dandy to me.

I’m sure I’ll have more to say over time about the switch to mirrorless and I wanted to give you my decision process here.  Hopefully if you’ve been thinking about a mirrorless camera my research will help you. Many thanks to Antonio and Steven for helping me along this path.

12 thoughts on “Leaving a DSLR for a Mirrorless Camera”