Rant about the way people talk about tech, my top 5 Menubar apps: iStat Menus from bjango.com, Jettison in the Mac App Store, TextExpander from smilesoftware.com, Cloak from getcloak.com and Bartender from macbartender.com to keep all these menubar apps cleaned up. In Chit Chat Across the Pond, we’re joined by Chuck La Tournous, contributing editor of The Mac Observer and publisher of Trailcamper.com.

Hi this is Allison Sheridan of the NosillaCast Mac Podcast, hosted at Podfeet.com, a technology geek podcast with an EVER so slight Macintosh bias. Today is Sunday July 13, 2014 and this is show number 479. We’ve got a big show this week, with some pet peeves, my top 5 Menu Bar apps, and an awesome discussion with Chuck La Tournous about tech toys and camping. Let’s dig right in.

I use Libsyn to host the audio files for the podcast, and they have a really weird interface. You can simply use an FTP tool (that’s File Transport Protocol) to push files up to them like a normal server, but after you push the file up, they move it to some location to which you have no access. Most days that’s not a problem because they gave me the path, but things get to be a mess if I ever have a problem with the file I’ve uploaded. That happened just last week when I accidentally pushed up the wrong version of my interview with Olivia Solon, I pushed the one that had a big gap in it, not the one I’d fixed.

So now back to Libsyn, I can’t just push the same named file up there, because they won’t let me overwrite the wrong one. I am faced with the horrors of using their web interface. The process to put the new file up is arcane and makes no sense to me, so ages ago when I used ScreenSteps Desktop, I made a tutorial for myself on how to do it so I didn’t have to figure it out each time. I dusted off my old ScreenSteps file and discovered that while my explanations to myself still worked, they’d changed the look and feel quite a bit. No problem, I whipped open Clarify and as I worked myself through the process, I took screenshots each step of the way. When I was done uploading the new file, I went back to Clarify and dropped in a few annotations so I’d remember what box to click in their interface, and then saved the file out to Evernote. It maybe cost me an extra 5-10 minutes to document the changes using Clarify and now I know the next time I have to face the awful interface in Libsyn, I’ll be covered.

It looks like Clarify 2 will be coming out in the Mac App Store in the next few weeks, so the long wait is over. If you can’t wait, you can try downloading the beta over at clarify-it.com. 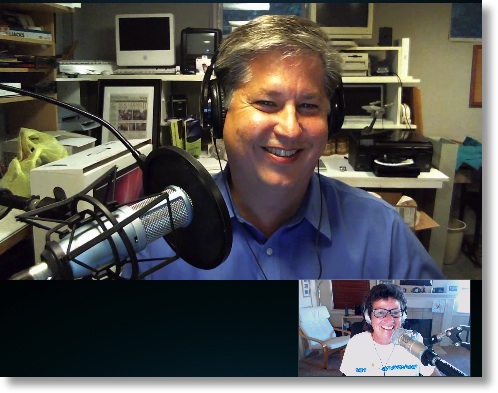 This week we’re joined by Chuck La Tournous. You may think he’s just that cute bass player with the impish grin in the Macworld All Star Band from Cirque du Mac, but he’s also a contributing editor of The Mac Observer and publisher of Trailcamper.com. He’s here to talk to us about tech gear and camping. You can find him on Twitter at @chucklatournous.

Links to the things Chuck told us about:

That’s going to wind this up for this week, many thanks to our sponsor for helping to pay the bills, Blue Mango Learning at bluemangolearning.com makers of Clarify. Don’t forget to send in your Dumb Questions, comments and suggestions by emailing me at [email protected], follow me on twitter and app.net @podfeet. Check out the NosillaCast Google Plus Community too – lots of fun over there! If you want to join in the fun of the live show, head on over to podfeet.com/live on Sunday nights at 5pm Pacific Time and join the friendly and enthusiastic NosillaCastaways. Thanks for listening, and stay subscribed.