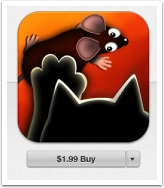 MacLurker here with a review of the PiCATso Paint App for iPad. Normally we start with the problem to be solved. However, I’m not so sure there really is a problem here; this may be a solution in search of a problem

The PiCATso app is a painting app that will bring out the artistic side of your cat. You start by selecting a few parameters: colors to use, canvas color, painting style.

Then you place your iPad in front of your cat and tap start. A very realistic looking mouse scuttles around the display, chirping and making little scurrying noises. Hopefully, the noise and movement attracts your cat’s attention. As he touches the display, attempting to catch the moving mouse, splotches of paint appear in the colors you selected previously.

After a few minutes of play, you can save the results to the iPad’s camera roll, from where you can share your little darling’s talent with the world.

The noises and irregular motion of the mouse make the app very appealing for any cat. Though I have to say, our female Rocky could barely be bothered to wake up from her nap. And our male Jinxo was smart enough to figure out that the mouse was not on top of the iPad and attempted to burrow underneath. Either way negative results on the art. But I’m sure your pawed Picassos will show more aptitude.

The Cat Music Game is incredibly silly and best experienced after several beers. You tap on kittens that are bouncing around the display. As you do that, each kitten reappears playing a musical instrument. But then, after a few seconds, it takes off flying around the display again and you have to tap it again to make it start playing music once more. Actually more of a human game. Here. Let me show you.

Where was I? Oh yes.

The second game, called Catch Games, is really the better of the two. It provides a selection of six targets (with accompanying sound effects) for your cat to chase around the iPad display. I suggest the fly target if you really want to annoy anyone in sound range. Or the spider target if you need to creep out your family.