Reminder to opt in to the NosillaCast News to get the shownotes fed to you every week via email at NosillaCast News Signup Page, my maudlin and sentimental look back at 10 years of podcasting and what it’s meant to me, Kevin from Connecticut reviews eM Client which allows him to check iCloud email on Windows, and Ken Knight reviews the Zoom IQ5 Microphone for iPhone. My Dumb question this week was about Clarify 2, and I do experiments to prove that your PDF output won’t be huge if you let Clarify scale your images. In Chit Chat Across the Pond Bart walks us through how to run xkpasswd locally and then how to modify it using scripting, and finally how to create an Automator Service which we can run from any application to generate secure passwords on the fly.

Hi this is Allison Sheridan of the NosillaCast Mac Podcast, hosted at Podfeet.com, a technology geek podcast with an EVER so slight Macintosh bias. Today is Sunday August 17, 2014 and this is show number 484. This week I had a lot of fun getting to be on the Daily Tech News Show again with Tom Merritt. I had a blast talking to him again as always but I must say I felt a TEENY bit guilty because in order to be on the show, I wasn’t able to help pick up Devon and Maryanne from New Zealand at the airport. You may remember Maryanne, she’s the professor who told us about induced memories in Chit Chat Across the Pond a little while ago. They’d just had a 14 hour plane flight but I still chose Tom’s show over picking them up. Am I a bad person?

Every once in a while I like to remind you guys of some things you may not realize I do that are available to you. Did you know about the NosillaCast News? This is a newsletter that comes out every time a new episode goes up that hand delivers all of the links to you. I wondered whether folks would really like it, but I looked at the statistics on how many people open it. I have read that a hugely successful newsletter gets something like 5-10% open rates. The NosillaCast News is opened more than 50% of the time!

One of the cool things about the NosillaCast News is that it’s opt IN, and super easy to get out if it’s not your cup of tea. If you think it sounds helpful, go to podfeet.com and tap the tab in the menu bar that says NosillaCast News Signup Page.

I got an anonymous Dumb Question this week about Clarify 2 and I thought maybe others would be interested in the answer. Anonymous wrote:

I would like to import screenshots of my ipad into Clarify and then create my annotated pdf in Clarify. But I am worried about the final product being too large a file. So, my simple question is this: What is the ideal size to import these screenshot images into Clarify so that my final pdf (filled with these annotated screenshots) is nice looking but not huge?

I searched the Clarify support documents and didn’t find an answer to her question, and I knew I could write to the Clarify folks and find out but I thought an experiment would be more fun. 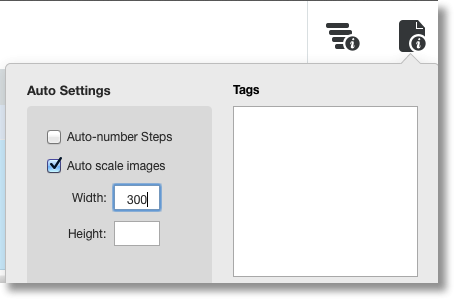 I opened a blank Clarify document, and took a screenshot of my entire 27” cinema display. I exported to PDF with no annotations or other text, and the resulting PDF was 700KB. The same screenshot simply saved to disk was about 900KB so they’re doing a wee bit of compression even without shrinking the image size.

I then took the same full screenshot, and Clarify auto-scaled it to 300px across for me. Exported to PDF and now the file is only 30KB! woohoo, looks like they really do shrink it, not some sort of metadata applied with the real (giant) image still in there. 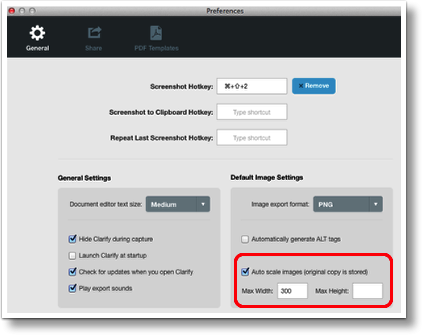 I often forget to set the auto-scale image on the entire document ahead of time, so I thought I should also check what happens if you take the screenshot and import it to Clarify huge, and scale it after the fact (which you can do by right clicking on the image and choosing Resize Image).

When I did that third experiment it also was about 30KB in the final PDF.

If you’d like to set a default so you don’t have to remember to resize, you can do that in the General Preferences. Note that it says your original image size is stored, so your Clarify document might get huge with a lot of giant images, but at least your PDF will be manageable.

If you’d like to get a copy of Clarify 2 before the NosillaCastaways discount expires, be sure to go to clarify-it.com and enter coupon code xxxxx to get 25% off. This code expires on September 1st so hop on it!

Following on from last time we first create simple script for generating passwords from the Terminal: https://www.bartbusschots.ie/s/2014/08/16/xkpassws-2-absolute-beginners-guide/

Then we move on to convert that script into an OS X Service so we can generate passwords purely from the GUI – https://www.bartbusschots.ie/s/2014/08/16/xkpasswd-2-service-with-automator/

That’s going to wind this up for this week, many thanks to our sponsor for helping to pay the bills, Blue Mango Learning at bluemangolearning.com makers of Clarify. Don’t forget to send in your Dumb Questions, comments and suggestions by emailing me at allison@podfeet.com, follow me on twitter and app.net @podfeet. Check out the NosillaCast Google Plus Community too – lots of fun over there! If you want to join in the fun of the live show, head on over to podfeet.com/live on Sunday nights at 5pm Pacific Time and join the friendly and enthusiastic NosillaCastaways. Thanks for listening, and stay subscribed.