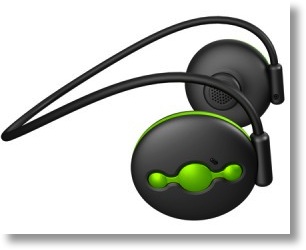 We’ve talked about the $130 Jaybird Blubuds, and then the Jabra Sports+ $60 headphones, but what if even that price is too steep for you? This week I’ve been testing the Avantree Jogger Sports Bluetooth headphones that will run you a mere $38 on Amazon. To review my requirements – I want something for running and working out at the gym that will stay put on my head and have acceptable audio for podcast listening. They have to be comfortable and not too fiddly.

The Avantree headphones do not have any flangy thingys at all to fit into your ear like the Jaybirds or Jabras. Instead, they have a stiff but flexible cable between the two sides that goes around your ears and then behind your head. The headphones themselves go just inside your ear, and have a large disk that covers most of your ear. No fiddly bits at all, and the part that goes around your ear doesn’t actually need to grab hold of your ear to stay in place. The wire is stiff enough that they just sort of compress a bit on your head. Of the three headphones I tested, they stayed snugly in place better than all of them.

The audio is better (way better) than my experience with the (probably defective) Jaybirds, but does make the speaker sound as though they’re inside a box. Not echoey exactly, just kind of muted. Definitely acceptable for my spoken voice podcasts, but an audiophile would pretty much go screaming away from the Avantree headphones. 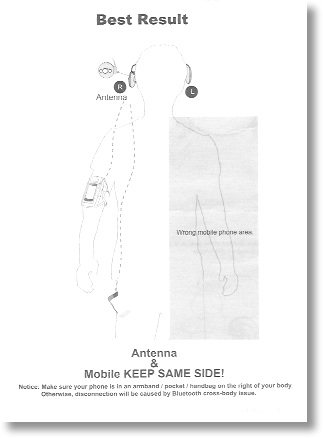 One rather annoying downside to the Avantree’s is that they have a proprietary USB charging cable. It’s regular USB on one end but a pin connector on the other that goes into a tiny hole on the headphones. If I lose that charging cable, that’s $38 down the toilet.

Included in the box with the headphones is a diagram demonstrating where to put your phone to avoid dropouts. They show that the controlling headphone is on the right side, so you must put the phone in your right pocket or on an armband on your right side. I think Charles did a good job of explaining that Bluetooth has problems going through your water-based body. Unfortunately, pretty much anywhere I put my phone other than carrying it my hand, I had awful dropouts. It mirrored my experience with the Jabras. I don’t know why Steve has little to no problem with dropouts but I do, but I guess my message to you is that your mileage may vary. Perhaps the Bluetooth is just weaker on my phone, and perhaps my new iPhone 6 will have better luck.

I tested the Avantrees using my iPad at the gym and they worked brilliantly. I’m always fighting with the cord between my iPad and my head as I bounce around on the elliptical, so having Bluetooth headphones for this application will be fantastic.

I have to say the biggest plus of the Avantrees is that they were the most comfortable of the three headphones I tested. They’re so light that they don’t pull on you at all and not having anything actually grabbing my ear was such a relief. They do include 3 sets of little spongy covers for the part that goes into your ear, but even without them it wasn’t too bad. After an hour walking with them they got on my nerves, so I added the spongy things and it really helped. I don’t think there are headphones on the planet that won’t bother me after an hour so I’d call the Avantrees a success in the comfort category. They also win as the least fiddly in terms of getting them into/onto your ears. Pull them apart, wrap around your head, let go and they pretty much go right to the correct spot on your ears.

If you’re looking for some Bluetooth headphones that will get the job done with acceptable audio quality for the price of a week’s worth of latte’s, I can recommend the Avantree Jogger Sports Bluetooth Headphones.