Hi there, Castaways! I’m Terry Austin and I’m here to tell you about an awesome new podcast app called Overcast from Marco Arment. You may recognize the name, Marco created Instapaper and was the co-founder of Tumblr. There’s a great interview article over at TechCrunch titled “Why Marco Arment Built a Podcast App”.

I’m always looking for a new podcast player, in fact faithful listeners heard a review of another one from me about this time last year. Ok… why is Overcast my current favorite – this one may last longer than the previous year-long winner for me. 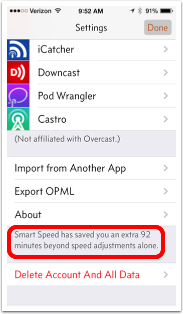 It’s dead easy to import playlists from another app. Click the Import From Another App button in Settings and it gives detailed instructions on how to make it happen. (pro tip: use EXPORT OPML). I imported my playlists from my previous podcast player in under two minutes. It is also dead easy to create and name new playlists – just click the icon that looks like a list with a plus sign, name your new list then select from your subscribed podcasts. You can choose which episodes get included in the list (new or in progress, in progress only, or another choice or two). You can even select priority podcast to have them near the top of the list.

When listening to a playlist you can click EDIT then drag the episodes into any order you’d like them played… For example I listen to a Morning playlist most weekdays as likely many listeners do. I listen to Wall Street Journal Tech News, Mac OS Ken, and Mac Observer Daily Podcast. I like to drag them in pretty much that order and it’s a snap to do so. I’d like to add a PodFeet Daily to that list (hey, she’s retired, she should have the time, right?

Oh… cool thing. The settings has a place to link to your Twitter account – WHAT THE HECK? Yeah, you want to do that. Because Marco included a super-cool discovery tool called RECOMMENDATIONS FROM TWITTER.
When you’re listening you have a “recommend episode link” on the play screen. This way, you can recommend episodes & podcasts to folks you follow and folks who follow you on twitter. I’ve already found one or two cool podcasts I might not otherwise have found.

PREMIUM FEATURES – You want to get that $4.99 in-app purchase

Oh, and yes, you can still listen at accelerated speeds if you insist. But seriously, just TRY SmartSpeed. It’s awesome. If I haven’t sold you on this yet… How about this. Marco even put a section in settings titled: OVERCAST NOT FOR YOU? And then he lists most all of his competing podcast apps. How classy is that?!?

Well… that just about does it. Thanks for the time, Allison and thanks to my fellow NosillaCastaways. Stay subscribed!