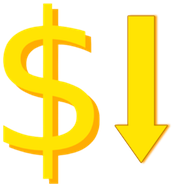 Do you have a recurring bill going on that just seems like it’s more than it should be? I would encourage you to call the company and simply ask them to lower the price. You would think that this wouldn’t work but I can swear that it does. Sometimes you do have to play a little bit of chicken with the companies but it’s amazing how often it works.

Years ago Time Warner sent us a notice saying that they were increasing our rate by something like $30 a month. I called them on the phone and simply said, “No, you’re not.” I explained to the woman that answered that it would be expedient if she simply moved me up to her manager right away. When the manager got on line I politely explained that I had options (Verizon FiOS was available to me). She took a look at my account, asked me what was important to me in my TV and Internet service. In about 5 minutes, not only were we not paying $30 more per month, we were paying $15 LESS per month. All I did was ask.

I have a combined data plan for my Verizon iPad and Mifi. If you haven’t heard of the Mifi, it’s a small portable device that gets a cell data signal and spits it out as wifi so you have your own personal hotspot. I suspect they’re not as prevalent as they used to be now that so many phones can do this same function. When I bought it, the better financial plan for me was to have them subsidize it. I’m paying $60/month for 4GB for the two devices (and paying off the Mifi). On average I use less than 1GB of data, since I only use the Mifi when I’m out of town. Unfortunately when I DO need the Mifi, I ALWAYS run out of the 4GB within a day or two. So I called Verizon. All I said was, “I don’t want to pay this much any more, is there anything you can do?” The woman worked on it for quite a while and in the end dropped my bill by $6/month which wasn’t much reduction, but at the same time she raised my limit to 6GB. All I did was ask.

A few weeks ago, I got tired of paying for HBO since we only really need it when Game of Thrones is on. $20/month is just draining out of the old account for no reason. We tried looking around for other stuff to watch on HBO but then realized that was kind of a dumb way to do it. So I went on line and cancelled HBO. This week I got an email from our ISP explaining that they had decided to give me complimentary HBO on my account. Isn’t that hilarious? I guess technically I didn’t ask in this case, but it worked anyway.

A long time ago I called my ISP and told the woman who answered the phone that I really liked my service and that I had no intention of changing companies. But then I asked her what would happen if I threatened to leave (again reiterating that I didn’t want to leave). She lowered my bil. All I did was ask.

So if you have a bill you don’t like, just call the company up and tell them you want it to be lower and see what happens. I bet a lot of you out there have stories much like mine – share them with us!

2 thoughts on “Sometimes, All You Have to Do is Ask”