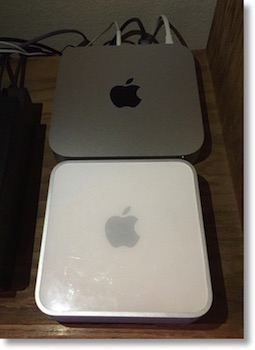 I’ve mentioned a few times that Steve and I have an aging Mac Mini connected to our family room entertainment center. It’s a 2009 Mac Mini with a screaming Intel Core 2 Duo processor with 2 whole GB of RAM. I have to admit that we haven’t used it too much over the years, but I was never sure whether it was because it was severely underpowered or because using a real computer connected to a TV is painful.

I bought this Mac Mini to replace the awful first generation AppleTV that I sold to Jonathan Cost for $50 so very long ago. I had tried to hack the AppleTV into submission when I realized I was wishing it was a real computer. The 2009 Mac Mini doesn’t have an HDMI port, so I had to buy a dongle that took the USB audio out and the Display Port out from the Mac and converted it to HDMI, which allowed us to connect into our A/V Receiver via HDMI. We got the Apple Bluetooth keyboard and trackpad and we were in business.

The big problem with this setup is that the OS X text is wee tiny on the 50″ TV so we have to be pretty desperate to watch content that can ONLY come from a Mac to use this setup. With a current AppleTV, a Roku and a Chromecast, we really have little reason to have the Mac Mini any more.

So I bought a new one! I was waiting for the new Mac Minis to be announced and unlike most people I was delighted with the upgrade. Thanks to Steven Goetz in our Google Plus community for pointing out that the RAM is soldered in now, I went forward knowing I’d better buy as much RAM as I thought I’d ever need. If you’re planning on using a Mac Mini as a power house machine, you might want to think again as they’ve limited this year’s models to dual-core, no longer offering a quad-core version.

Apple delightfully dropped the price of the entry-level Mac Mini back to $500 but they did what they always do, they made the jump up to the next model a no brainer. Let me explain. The entry-level Mac Mini is a 1.4GHz Intel Core i5, while the middle model is a 2.6. That means the middle one is nearly double the speed for only $200 more. In addition you also get twice the storage from 500GB to 1TB, and you get 8GB of RAM instead of 4GB. That $200 jump is impossible to deny. 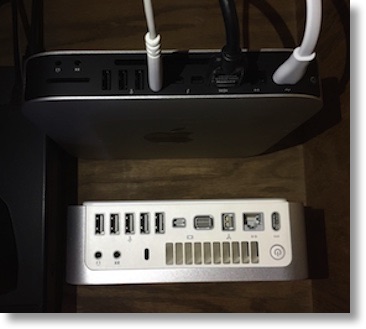 One of the main things I was waiting for in the new Mac Mini was a nice fast SSD option but Apple did something to make the decision difficult. For $200 more on the midrange model, you can get EITHER a 256GB SSD, or a 1TB Fusion drive. The Fusion drive is actually a 1TB 7200 RPM spinning drive with a 128GB SSD, and the operating system intelligently moves data back and forth depending on what you use to give you the best performance. Your OS will live on the SSD because you’re using it all the time, and the applications you use the most will also be there. As you use the device it will also keep data that you access all the time on the SSD.

So now you have to look at what you’re going to do with this device to figure out which to get. If you have a huge amount of data you want to store, the Fusion drive is the way to go because you can keep it all on the one drive and it should be pretty darn fast, but if you have smaller needs, the 256GB SSD will give you better performance all the time.

Years ago Steve created virtual disk images of all of our home movie DVDs he’s created over the years, and we have 65 ripped movies too. We have them strung out on external (laptop quality) drives hooked up via USB 2.0 right now, so it seemed a good idea for us to get the 1TB Fusion Drive. On the other hand, we’re upgrading Steve’s mom from a white Macbook, I think circa 2008. She never unplugs it from power so a Mac Mini is a perfect upgrade for her. I looked at her disk usage to see which model was best for her. Would you believe she currently has an 80GB hard drive with 66GB used? Clearly the 256GB SSD was the model for her.

I know it’s probably overkill actually but to figure that out I asked her whether she wanted to be happy for 3 years for $700 or happy for 5 years for $900 and she picked the latter. Of course for my silly living room Mac I doubled the RAM to 16GB but left hers at 8GB.

I thought this discussion might be useful if you’re looking into buying a Mac Mini yourself. By the way, there IS a top level Mac Mini configurable to a 1TB SSD, and a 3.0GHz Intel Core i7. That bad boy is $2200 before you add tip and tax so I don’t feel too bad about my $1100 family room PC…