Steve and I have been living in a split household for the last year. It’s been a trying time, and finally we have unity in the NosillaCast Headquarters. I’ve been using 1Password from agilebits.com as my password manager while Steve’s been using LastPass. You might remember from an article I wrote last October that LastPass stopped logging me out automatically and that prompted me to switch over. I never said LastPass was a bad service but it just stopped working for me.

I did end up liking and using 1Password but just because I defected from LastPass didn’t mean Steve had to change. I also didn’t want to make this more of a hassle for him, so I ended up straddling the fence between the two tools. When we were both on LastPass we shared some passwords (you know, important stuff like our frequent flier mile accounts) using the tools built into LastPass. It was kind of clumsy because you have to remember to check the box that allows the other person to change it, and the person receiving the share has to log in twice to find the share; kind of a mucky interface in my opinion.

I kept my old LastPass account active so Steve could share to me, but I’d have to go into LastPass (logging in twice for no apparent reason), accept the share, copy the password and then go back over to 1Password and paste it in creating a copy, not a synced share, of the password. Pretty big hassle but at least it was easy for him. 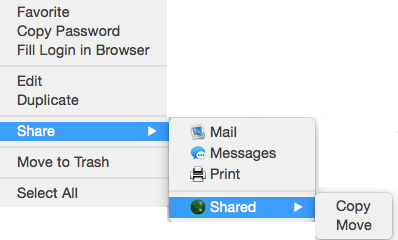 Fast forward now by 7 months and it was time to set his dad, Ken, up with a password manager. I had already put his mom on 1Password a few months ago when I got her a new computer. Steve decided that it wouldn’t make sense for him to teach his dad how to use LastPass, so he set him up with 1Password. I wish I could take credit for brilliantly orchestrating this but it was actually accidental. After Steve spent hours with his dad helping him with 1Password, he decided it was time for him to move over too. The best way to learn something is to teach it, so I wasn’t going to have to help Steve get up to speed at all!

The main reason I hadn’t ever tried to twist Steve’s arm to convert to 1Password was because I didn’t like the way 1Password handled sharing. The good news is that I’m a dope. I didn’t like it because I didn’t understand how it worked! Luckily a chain of events occurred to help me learn. Megan O’Brien from Agile Bits (makers of 1Password) made a nice comment on podfeet.com about something I’d written about 1Password. We ended up exchanging emails and I happened to mention that I hadn’t converted Steve because I didn’t like how they shared passwords. The 1Password method is that you have to create a shared vault. It made me crazy to think of switching vaults, and that would mean we’d each have two passwords.

And that’s where I was totally wrong! Megan explained that having two passwords would be dumb (and disobey the whole construct of 1Password). She explained that you each access this shared vault using your own 1Password and changes sync automatically between you. It was time to see if Megan was right – her signature says, “Level 60 Support Sorceress @ AgileBits” so she probably knows what she’s talking about!

We followed my tutorial on how to export from LastPass and into 1Password that I did back when I converted. I have to say it went even smoother for Steve, I think the script the uber-user created for the translation has been improved since I used it. The only thing he didn’t get across was any attachments, which there’s really no way of transferring. Luckily he only had a few so it wasn’t a big deal to reattach them.

Now with both of our primary vaults in good shape, it was time to test this crazy shared vault idea. I created a new vault but gave it the same 1Password as my primary vault. Then I followed the Agile Bits instructions to put that vault out in Dropbox and send Steve the link to the keychain file that 1Password created. Then on his Mac, he double-clicked on that shared vault keychain file and it opened in his 1Password. Now here’s the tricky bit. The first time he opened it, it asked for the password and it was asking for MY 1Password, not his. That confused us but it does make sense, right? You wouldn’t want someone to be able to get a link to a Dropbox file and just open it with their own password. From then onwards though, the shared vault opens with his own 1Password. 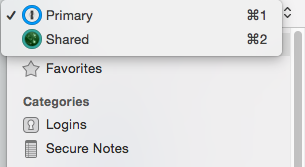 In my imagination before I talked to Megan, I thought we’d have to quit and reopen 1Password every time we had to switch vaults, but she showed me that you get a pulldown in the upper left of the window to switch vaults. If you’re a keystroke kind of girl, you can use command-1 and command-2 to switch between vaults. Makes it super easy! I wish it were a tad easier to move things between vaults though. You have to right click on the item, choose share, choose the vault and then choose Move. It seems a nice little drag and drop would be easier. I guess it’s not something we’ll be doing daily so it’s not that big of a deal but I still think it should be easier.

Steve says that 1Password is a much nicer interface, both from a visual cue perspective as well as for pure usability. Setting up passwords to be shared is a smoother experience, but once you’re sharing he (and I) find it clumsier to use shared password. The switching of vaults is annoying and I keep thinking it’s lost one of my passwords until I remember it’s in the other vault. Hopefully after a while we’ll get used to which passwords are in which vaults. It’s even clumsier in the iOS app unfortunately, it’s actually four taps to switch vaults, and there’s no indication of which vault you’re in until you go into Settings, Vaults. I think nice toggle or pulldown right in the main screen would make this a lot easier.

Bottom line is that NosillaCast Headquarters is now unified and we’re both happier using 1Password. I will say this one more time, I’m not saying 1Password is better than the other options and the MOST important thing to do is to PICK one and use it!