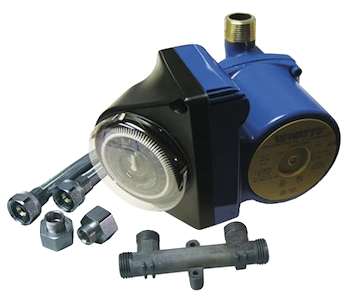 You MIGHT have heard that California is having a wee bit of a drought while many other places in the world are suffering with record rainfall. Until we figure out how to level things out across the globe (which will end up causing some other natural disasters I’m sure), we in California are looking for ways to save water. At my house one of the things that drives me bonkers is how long it takes for the water in our bathroom and kitchen to get hot. I hate seeing all that precious water literally go down the drain every day while waiting for hot water!

My brother Grant is really smart about stuff like this, and very environmentally conscious so I called him and told him to find me an easy, inexpensive solution to this that did NOT include me carrying buckets of water down the stairs to wash my clothes. While he’d heard about ways to circulate water around your entire plumbing system in your house, they involved replumbing much of the house so it didn’t meet my requirements of easy and cheap. 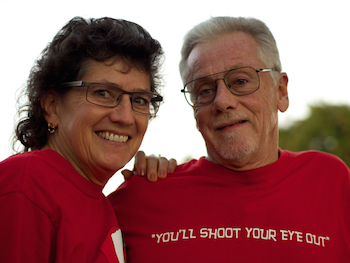 An hour later he called me back to tell me he thought he’d found the solution. He found these things called Hot Water Recirculation Pumps. It sounds like the same thing I just described but it’s a very clever solution that does NOT require replumbing the house. There are two parts to the solution: there’s the pump itself that gets connected to the hot water output of your water heater, and a small passive valve that you put under the farthest sink from the water heater. The valve is the clever bit.

There’s one downside to this and it’s that your cold water is sort of lukewarm now, but in our house we don’t ask for cold water nearly as often as we want hot water, and cold comes from the source really quickly anyway.

The good news is that we had two engineers involved in this project, so you know we’re going to get some good metrics, right? How else would you know if this solution really did the trick? The pump Steve bought is the Watts 500800 Premier Hot Water Recirculation Pump for $200 on Amazon. The good news for us is we were buying a new water heater anyway, and David from Stephen’s Plumbing agreed to install the pump for free. One caveat is that the pump requires power, so if you don’t have power in the water heater closet you’ll need to make that happen too.

Steve installed the valve under our sink by himself. I don’t mean to diminish Steve’s plumbing skills at all but this must have been an easy job. It only took him about 20 minutes and he made ZERO trips to the hardware store. Made me doubt he did it right! 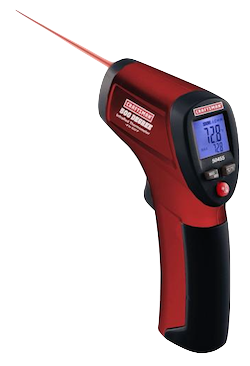 We measured the time it took the water in the sink to go from its ambient temperature to 100F before and after the pump and valve were installed, and we did the same test on the shower. But of course we had to have a cool gadget to measure the temperature so Steve used his handy dandy Craftsman Infrared Thermometer ($40 on Amazon). This is so much fun to play with – you shoot a laser at the water and the display gives you an instantaneous digital readout of the water temperature.

We can absolutely call this a HUGE success from an annoyance perspective, I can’t be waiting around that extra 32 seconds – I don’t have that kind of time! But how much water are we saving? That required us to measure how much water was wasted in those 32 seconds before the pump and how often do we heat the water up in a normal week. I’m afraid we didn’t have a sophisticated laser method to measure the flow, instead we used a bucket and the stopwatch on my Apple Watch.

We measured how long it took to fill a gallon in the bucket from the shower, and how long for a quart in the sink. Then we approximated how often we do this in the bathroom and the kitchen sink where it used to be equally bad. Oh, I almost forgot to mention that fixing the upstairs (farthest) sink from the water heater did also fix the kitchen sink. If you find another sink in your house that isn’t heating up quickly enough, you only need to buy and install another valve for that sink.

Are you ready for the bottom line? For the cost of a $200 pump and valve combo plus the cost of installation (probably less than a hundred dollars), we will save 2863 gallons of water a year! You might be worried that we’re constantly running a pump and now wasting electricity, but the pump comes with a timer that lets you specify what times you want instant gratification. I would call this a success on every front, and I have to give credit to my brother Grant for it, which kills me.