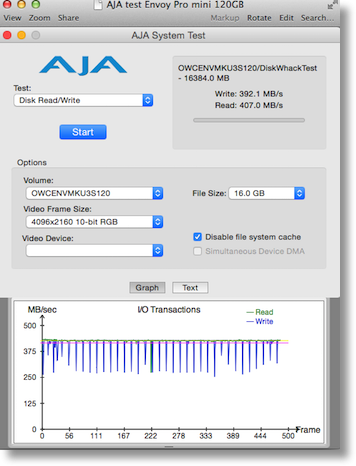 Last week on the show I told you about a thumb-drive sized external SSD called the Envoy Pro Mini from OWC, In the review I talked about the speeds I was able to measure which weren’t as high using Blackmagic Speediest as what OWC had in its specs. They explained to me that Blackmagic uses uncompressed data like video while the Envoy Pro Mini is more suitable for compressible data. I had reached out to them for a bit more explanation but unfortunately they didn’t get back to me till after that review went live. The good news is that they got back to me this week with a really good explanation that’s super nerdy which is how we like it around here, right? Part of my question was why they said the Blackmagic test wasn’t applicable and yet I know OWC has used Blackmagic Speediest to demo other products. Their answer was pretty long but I’ll try and pull out the most interesting parts and read them verbatim.

First I questioned why video would not be what they call a “real world test”.

…the components used to build a particular SSD can affect this. There are many different flavors of SSD’s on the market now and each is built a little differently than the next. One main difference is the type of NAND they’re built with. Two commonly used types of NAND are Synchronous and Asynchronous. Our SSD line includes many drives that are built with both types of NAND. The Envoy Pro mini you’re testing is built with Asynchronous flash.

They come back to the Asynchronous Flash a little bit later but let’s keep going on the real world test question first. They went on to explain:

A smaller portable SSD like the Envoy Pro mini, which maxes out at 240GB currently, would not be likely to be used for video work, as that requires massive amounts of capacity. This is one of the reasons why we do not list video benchmarks on our site for this product. On this ThunderBay 4 RAID, 12TB product page, (http://eshop.macsales.com/item/OWC/TB2SRT12.0S/) , which is part of a product line that goes up to 32TB, we list results from Quickbench, BlackMagic and AJA, as that kind of capacity could be used in many different ways, including video work.

So to summarize: there are a few very good reasons why we don’t use BlackMagic to benchmark this particular product. The Envoy Pro mini is built with a SandForce processor and Asynchronous flash. Both of these components require compressible data to shine. Almost all video workflows use incompressible data. Given the size of the drive at 240GB and the very few video files it could hold, as well as the speeds you see with incompressible data, it’s just not the right tool for the job when it comes to video editing.

Now that DOES make sense. When I talked about video, I meant say carrying around a few movies for a trip to use on a MacBook or MacBook Air with limited capacity, not actually recording video to the device, which is what Blackmagic is testing.

My second question was why the SSD in a “normal” USB enclosure (also purchased from OWC) outperformed the pants off the Envoy Pro Mini. Here’s their answer:

And finally, our Product Development tech sent me some info on the AJA Benchmarking. I’ve pasted an AJA benchmark of one of our 120GB Envoy Pro mini’s below. As you can see, performance is very good and the graph below shows the peaks and valleys of the transfer speeds during the overall file transfer.

I love learning two things here, that the type of NAND Flash matters a lot depending on what kind of files you’re trying to read and write. If I’m using an SSD for backup of my gazillion separate files, asynchronous flash would be just fine, but if Steve wants to be running real time while editing video in Final Cut Pro X, he should make sure his SSD is synchronous Flash.

They even gave a link to download the free AJA benchmarking tool for Mac or Windows that IS current, unlike Quickbench that they recommended earlier. Unfortunately I had to return the Envoy Pro Mini before I got AJA so I can’t replicate the tests but I trust OWC. I did run AJA on the OWC External SSD and got great results, around 375MB/s read/write. Nice interface and lots of options so I’ll be keeping AJA on hand for future testing of drives.

I want to say I’m still bullish on the Envoy Pro Mini for portability, and remember the speeds of transfers were too fast for me to actually see unless I was moving multiple GB of data across to it. Storage is like bikinis, the smaller they are, the more they cost.