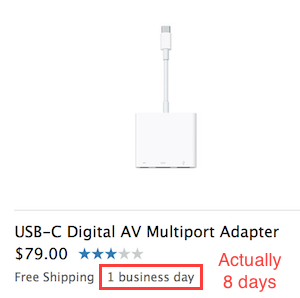 The new 12″ MacBook has been mocked by many for it’s paltry connectivity options, or should I say option. No MagSafe connector, no Thunderbolt, no HDMI, no SD card slot, heck it doesn’t even have a standard USB port. It only has a single USB-C port and a headphone jack. The good news is that USB-C is a standard connector, nothing proprietary about it. In theory we’ll have access to a plethora of peripherals using the new standard, and we can buy dongles for whatever we want.

It’s not like we haven’t had to buy dongles in the past. I have Mini-Display Port adapters for HDMI, DVI, and VGA, and 30pin adapters for my old iOS devices too. I keep them in a nice bundle that I bring whenever I have to go present. Imagine my delight when I spoke at the SBAMUG, a local Mac User Group when they had Wifi and a lovely AppleTV so I didn’t need any dongles.

But next week for Macstock in Chicago, there’s no AppleTV, only a VGA projector. I don’t have a USB-C to VGA adapter and the idea of buying backwards in time to such an old connector makes me cringe. Apple does sell one, but the darn thing is $79! Sure you get a passthrough USB-C port so you can still charge your MacBook if you need to (but you never need to) and a “regular” USB-A port but still, $79 for that? 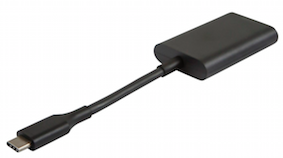 Luckily Mike Potter, the awesome organizer of Macstock, let me know that he’s got a VGA to HDMI adapter, so maybe I could go with HDMI so I’m not buying 1972 technology. In the Apple “Store” (and I’m using quotes around the word store) they sell a digital video adapter that turns USB-C into HDMI, USB-A and passthrough USB-C. That sounds much better, even though it’s still $79. Macstock is coming up quick so I decided I’d just pop over to the Apple Store and buy it.

My next idea was to buy a USB-C to Mini Displayport adapter, then I could plug in one of my old adapters to go Mini Displayport to VGA. Yeah, that would be cool if it existed, but as far and wide as I looked I couldn’t find one..

I finally gave up and bought a $35 USB-C to HDMI adapter from Monoprice, and it got to me in two days. Living on the bleeding edge as I do, I understand that it will be harder to find peripherals but it frosts my shorts that Apple, who sold me the device, can’t even get me adapters in a reasonable length of time!