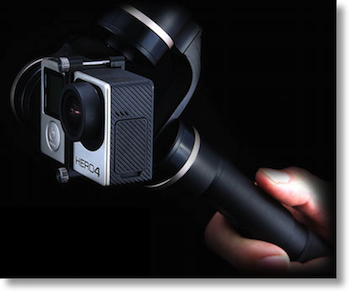 The gadget I’m reviewing today is the G4 Handheld Steady Gimbal made by Feiyu Tech. This cool piece of kit is designed to steady a GoPro Hero camera while taking handheld video.

Let’s start with the problem to be solved. Say you’re on vacation and decide to take some video with your GoPro camera while in a jeep bouncing wildly over the dunes, or riding a camel in the Dubai desert or possibly riding on the back of a lumbering elephant. You bring back your video for editing and it looks pretty good, but you notice how shaky the video is due to all of that bouncing around you did. You try to stabilize the scenes with your video editor but most of the scenes are just too shaky to be properly stabilized with software.

Enter the G4 Handheld Steady Gimbal. This device does a wonderful job of stabilizing your GroPro camera under almost any moving, rotating, vibrating or shaking conditions. The G4 gimbal performs much better than those handheld steady-cam rigs with counter-balance weights hanging underneath. It doesn’t need any balancing prior to use and it maintains a very steady lock in azimuth, pitch and roll regardless of how vigorously you move it.

In Allison’s show notes, I’ve included a side-by-side GoPro video comparison of Tesla running down the sidewalk taken with and without the G4 Gimbal to show how effective it is in stabilizing video.

I first heard about this nifty device while Allison and I were vacationing in India with Don McAllister and friends. Don had just purchased the G3 version of this gimbal and used it for several scenes he shot there. He let me try it out and I was hooked from the outset. The G4 is the next generation beyond Don’s G3 version, but they are nearly identical except for a few features that I’ll mention later.

The G4 is a 3-axis handheld gimbal that you slip your GoPro Hero camera into, push a button to activate the gimbals, wait about two seconds for the gimbals to stabilize, and begin taking smooth, professional looking video regardless of your movement. It’s pretty clear that Feiyu took advantage of recent advancements in gimbal technology used for light-weight quadcopters and other drones to design this compact handheld device.

The gimbal is solidly built with aircraft-grade, black anodized aluminum. Weighing in at only 265 grams (just over a half pound) it’s light enough to hold with one hand for extended periods. The G4 is made up of a simple camera mounting frame attached to a 3-axis gimbal that is mounted to a 5-1/2 inch cylindrical grip. It feels good in the hand and it’s easy to manipulate and aim your GoPro in any orientation. The unit is powered by two specialized 900 mAh batteries (contained in the gimbal’s grip) that provide about 5 hours of operation. The G4 comes with comes with a 2-piece carbon-fiber extension (for an additional 29 inches of handle), four batteries and a USB charger.

Feiyu made attaching and detaching your GoPro camera to the gimbal very quick and easy. No tools are needed, just unscrew two thumbscrews to open up the camera frame, slide in your GoPro, and hand tighten the two thumbscrews to lock in your camera. One downside here is that the camera frame is not made to handle a GoPro in its housing. Instead it’s designed to hold a naked GoPro, without a housing. Since the GoPro housing is generally used to protect the camera from moisture, a GoPro mounted in this gimbal should not be used in wet conditions, which makes sense since the gimbal itself is also not waterproof. The G4 gimbal’s camera mount is designed to attach only to GoPro Hero cameras, and not to any other cameras. It would be nice if the gimbal had additional mounting brackets that supported other small cameras, such as an iPhone.

For additional cost, an accessory cable is also available that allows you to charge your GoPro while it’s in use in the gimbal. This comes in handy since GoPro batteries don’t last very long while taking video. The charging feature is not available on the G3 version.

There’s a special fourth Inversion Mode available in the G4 only which allows the gimbal to be inverted for cases where you want to capture video below you or low to the ground. In this mode, the G4 operates in the Heading Following Mode, but upside-down.

Ok, let’s talk about cost. The G4 handheld gimbal as I’ve described it sells for about $300 US on Amazon, plus another $30 for the extension poles and $17 for the GoPro charging cable. If you want to save a little money and are willing to give up a few features, you can get the G3 model for about $245 US.

Let’s summarize with the G4’s Pros and Cons:
Pros:
* It’s a solid, ergonomic, light weight design,
* GoPro attachment & detachment are quick and easy with no adjustments or balancing required,
* And the G4 stabilizes video scenes extremely well under most moving conditions with professional looking results

Cons:
* The G4 accommodates only the GoPro Hero camera,
* A GoPro camera cannot be in a housing while mounted in the gimbal so it’s exposed to the environment,
* And the cost is on the high side, but the build is of high quality

My overall assessment is that the G4 is great solution for those who are willing to pay a premium for well stabilized and professional looking GoPro video in dry conditions, while the G3 is better suited for those who want to save a little money. Both devices may be a bit pricey for many, but for those who have a GoPro camera and really care about recording stable video under moving or shaky conditions, the G3 or G4 handheld steady gimbals may just be what you’re looking for.

That’s it for now Allison … oh, and you can be sure that I will stay subscribed.