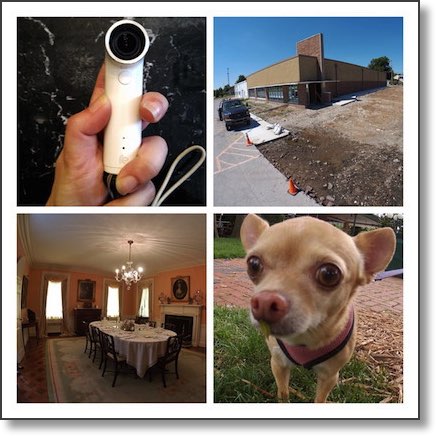 Google just told me a hobby is “an activity done regularly in one’s leisure time for pleasure.” Or a small horse.

Years ago, back when I had a film SLR and lots of lenses, flashes, and related gear, photography stopped being mostly fun about the time I was invited to a wedding, asked to bring my camera, then learned on arrival the budget-constrained bride was relying on me instead of a paid professional. That’s not a hobby, because it sure wasn’t a pleasure.

I like taking pictures. My daughter, the art school graduate married to a professional photographer, lured me into buying a camera to shoot RAW, then gave me a brief starter tutorial in how to tweak RAW and edit my photos further in Photoshop. Hey, that’s work! And as a reminder of my earleer escape from that rabbit hole, along came an invitation to the family reunion, and, oh, yes, please bring your new camera.

I continue to take a lot of digital photos. Some with my two higher end cameras. But most with either my cellphone, or an HTC RE. The RE has no viewfinder. In appearance, it reminds of an asthma inhaler. There’s just a couple of buttons. One’s both power and shutter and selects between still and video. The other puts video into slow motion.

The RE’s trick is an ultra-wide angle lens. It’s so wide, I have to remember to hold it away from my body so my feet aren’t in the shot. It’s so wide, everything in front of the lens is photographed. Use as is, or crop. The RE does best in bright sun, though it is difficult to avoid lens flare depending on where the sun is. Even in dim interiors, the sensor captures a lot of image, though post-processing is necessary to bring it out.

The little camera works fine stand alone. It plugs right into a computer for photo downloads. But its real strength depends on the Android or iOS Apps that manage it, its images, and can also function as viewfinder and shutter.

I’ve mounted the RE on a tripod and videoed hummingbirds in flight. In the spring, it snapped some great pictures of incredible landscaping, photos possible only with a very wide angle lens. By setting the RE on the end of a long table, it’s possible to image everyone at the table, including the photographer, who can snap the shutter remotely while seated. Don’t like the fisheye effect? The RE App will remove it.

This little camera is fun. And funny looking enough no bride’s going to spring a surprise role as wedding photographer on someone with a RE. Still, the RE is small enough, it could be mounted unobtrusively in a sanctuary, and video the entire event, up close and personal, hours and hours on a 64 GB card, and unlike some cameras, it works when connected to external power.

I’d like to also mention Google’s free Snapseed application, both iOS and Android. It’s my photo editor of choice, easily and non-destructively bringing up dark images, creating highlights, spot editing, changing color quality, filters, the works. My daughter, who after graduating from art school was hired by the University to teach Photoshop, uses Snapseed on her iPhone to quickly turn out results that rival what she can do with Photoshop on a Mac.

The HTC RE has been on sale, with accessories, for as little as $100. Snapseed is free.

1 thought on “Fun Little Camera: HTC RE Review from George from Tulsa”