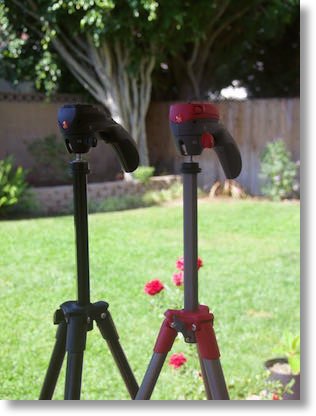 I’m going to tell a story and I promise it ends with an actual review of the Manfrotto Compact Action Tripod. But first, my story of why I needed to buy a new tripod.

When I got my first SLR camera, the Minolta X700 in 1980, I also bought a tripod. I used that tripod for more than 30 years. Finally I suggested to Steve one year that perhaps tripod technology had advanced a bit, and that a new tripod would make a lovely Christmas gift. I did some research and found a Manfrotto tripod that looked really cool and I gave the link to Steve.

When Christmas came and went and there was no tripod, I went out and bought it for myself. I remember I didn’t wait for the holiday cheer to subside, and went to the Best Buy near Steve’s sister’s house and bought the Manfrotto I’d had my eyes on.

Fast forward a year or two and I slowly started to notice that whenever I wanted to use my tripod, Steve had already anchored his camcorder to it. I seemed to never be quick enough to snag it before he laid claim to it.

Last Christmas, I asked Steve for a replacement tripod. Well…he got me one, but it wasn’t anything like the Manfrotto I’d picked out. It was a good tripod but I could never get used to how it opened. It sort of folded inside out to itself – when pulled from the bag, the legs AND the tripod mount were both on the same end. After a minute or two I’d remember how to make it go, but it never quite worked as easily as I wanted.

Last week I decided to buy myself a THIRD tripod. I decided to check out Manfrotto since I liked my original tripod so much. At first I was finding tripods costing hundreds of dollars. I’m not saying you shouldn’t spend a lot on a tripod, it’s just that I use one maybe 4 times a year so it’s really not worth it to me to go high end.

I settled on the Manfrotto Compact Action Tripod in RED. Here’s what I like about it.

Bottom line – the Manfrotto Compact Action Tripod (in Red) is inexpensive, light, and easy to use, perfect for my needs.