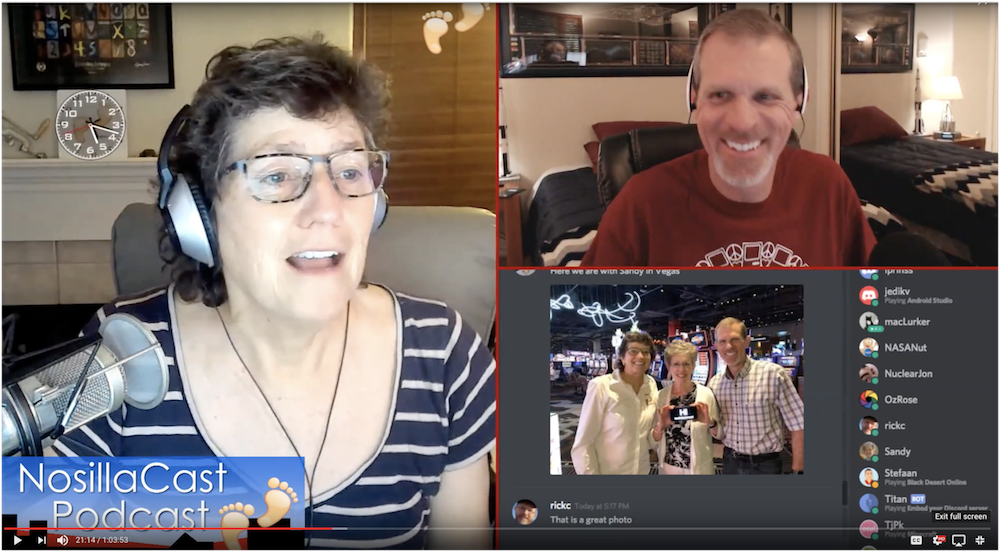 Last week we had breakfast with Oliver and Achim Breidenbach from Boinx Software. They’d told me ages ago about their product called mimoLive which is a video switching application but I didn’t really think I needed it. Oliver suggested they make a house call to set it up and show us how it worked. Well, who am I to refuse tech support from the CEO of the company?

But first, the problem(s) to be solved, right?

Steve and I have been doing the Live NosillaCast for quite a long time now but there are some things we’ve long talked about improving. One of the biggest things is that we’d like to shift more of the production from me to Steve. I swear it’s not just me who wants that!

During the live show, I’m not just creating a podcast. I’m the one who’s creating the video and audio feeds. In addition, Steve is sitting at a high-end 27″ iMac and I’m on a MacBook Pro. It’s high-end too but still, why have all the power of that iMac and not use it?

Another thing we’d like to find is a way to make the video more interesting. Right now you see me if I’m talking and Steve if he’s talking, which is auto-switched by YouTube Live. That’s it. I can stop sharing my video and change it to show one of my apps but then you can’t see Steve or me.

It sure would be cool if the video could show me and Steve and the Discord chat at the same time in a 3-up screen. And maybe if I could show my recording application during the times where I have to go do some editing, that might be better than staring at the top of my head as I work. For geeks, watching audio editing would be more interesting.

And what about making it more professional looking with lower thirds and other branding elements? Wouldn’t that be cool?

mimoLive can do all of these things and much more. Oliver and Achim installed mimoLive on Steve’s iMac to start. In mimoLive, you create video and audio sources and then you stack them up in layers. Each layer can be live, or, well, not alive. If a layer is live, it shows on screen as long as there isn’t a live layer above it. Make sense so far?

Layers can be video streams or audio streams or static images. We created a source for Steve’s webcam and his microphone and added them in as layers. Now we needed to have a video source of me, but of course that doesn’t exist on Steve’s iMac.

That’s when probably one of the keys clicked into place that this application could work for us. In mimoLive you can create what’s called a mimoCall. This is a video source that will come via a web browser on the local network. Creating a mimoCall on the main iMac session creates a static URL and has a button that suggests sharing that URL.

On my Mac in Chrome, I open that URL and I’m immediately sharing my video camera and my audio. It looks a lot like a typical Google Hangout on Air window where you have a gear to change which camera and which audio source you want to stream and you can mute and stop video streaming with other buttons.

I said I wanted to be able to send video of an app on my desktop too, so they created a second mimoCall.  I simply used that new one to choose an app or my entire desktop to share. Since the video switching all happens on Steve’s side using mimoLive, I just open these two browser links in two separate tabs and I’m done. All of the heavy lifting is done on Steve’s side.

I’m having some trouble with mimoCall though. When I first open the URLs in Chrome, they both default to pointing at the webcam built into my LG 5K display. I need to switch one to my Logitech c920 webcam and the other window needs to do the screen capture of my recording software Hindenburg. Sometimes, and in fact often, when I try to tell it which device to use to send video, it freezes the current video stream and never sends the newly defined video stream. I’ve tried emptying browser cache in Chrome (which sometimes fixes it) and quitting and restarting Chrome, but sometimes it never recovers. Boinx is looking into the problem and I’m sure we’ll get to the bottom of it.

Back on mimoLive on Steve’s iMac, we added a split screen layer. These can be up to 6 video sources showing at once (too bad it’s not 9 or you could do the Brady Bunch theme song). Anyway, we made ours three video sources. It has one vertical area on the left and two landscape areas on the right. He dragged the video stream of me from the first mimoCall to the big vertical area, and then put my desktop from the other mimoCall on the upper right.

For the third input, we wanted to show the live chat in Discord. Rather than having me make a third mimoCall, on Steve’s iMac he added a Window Capture source. That’s the same as what I’m doing but all inside mimoLive. With Window Capture, we added in Discord and then fussed around quite a bit resizing the Discord window to look just right on screen in the lower right of our split screen.

So that’s working great with the three video sources, but more often than not we want to see Steve rather than my desktop. No worries, we replicated that layer and swapped out the mimoCall of my desktop for Steve’s video input. Remember I said the highest layer that’s live is what you see? We simply put the split screen that included Steve above the one that included my desktop and we make them both live. If we want to show my desktop we just toggle off the Steve layer split screen and it shows the one underneath which is my screen.

All of this is grand but I am a control freak so I wanted some level of control of what was being shown to the live audience. I didn’t want to have to say, Hey Steve, can you swap your video for my desktop, please?” Not that he wouldn’t do it, but sometimes he has to run downstairs and start our dinner, or he’s goofing around in the chatroom not paying any attention to me! Plus, see control freak statement.

No worries, marital bliss will be preserved because Boinx has an iOS app called mimoRemote. With mimoRemote you can have a control surface on an iPad or iPhone. This is a grid of buttons you can toggle on and off to make various sources go live or turn them off. I set up my 9.7″ iPad Pro with mimoRemote, and I can add, delete, and rearrange the buttons for those layers I want to adjust. I added one to toggle the split screen layers on and off.

Don’t tell Steve, but I added a button to my mimoRecorder control surface for his audio layer so I can mute him! It’s not that I don’t like him to talk on the show, it’s just that sometimes he forgets to mute himself when I’m actually recording and it’s hard to concentrate on the real point of all this, which is me creating an audio podcast!

There appears to be one little bug in mimoRemote. To add, delete and rearrange sources on the control surface, I have to switch from Edit to Live. When I’m done editing, I hit Live to get back to the active control surface. That all work’s great, but there’s a name at the top that is getting weirder and weirder. It started as bing called Al’s iPad Control Surface. As you can see in the screenshot in the shownotes, it now says “Al” followed by a. Whole bunch of As with alternating tildes and circumflexes over then with one cent symbol. I suspect it never liked the original apostrophe that was in my title. I can clean it up but I want to show it to Boinx before I do.

I can tell that mimoLive is one of those apps that will give us hours of entertainment over time. We have barely scratched the surface of what it can do. As we were test driving the app this week, we realized that we could put an analog (or digital) clock up on screen. We made a top layer that’s the NosillaCast Live logo and then put a giant analog clock above that. This means we can go live before 5 pm Pacific time, but you’ll see a clock showing you what time it is here so you know when we’ll be on. We just have to remember to mute our mics too before the show so you don’t hear us chattering during preshow!

There’s one more problem mimoLive solves that I didn’t mention. And that is that whenever things get stable and working, I want to change them. We haven’t had a good crash and burn on the live show in a long time so it’s clearly time to introduce some new software and see if we can mess things up. mimoLive has hundreds of dials and switches and more layers and sources than you can imagine, which will help me scratch that itch for years. I could stream to Twitch, record to disk, add lower thirds, change transparencies…

mimoLive is from Boinx Software and it’s a subscription service. For personal use or education, it’s $199/year, or you get 3 years for the price of 2 at $399. But let’s say you only need mimoLive occasionally. You can buy a single month for $19. I’d sure rather it was a one-time purchase, but I understand that this is their business model. They did tell us that schools are their most enthusiastic users, allowing students in their A/V labs to run a “real” news station right from a Mac. Check it out at boinx.com/…

And if you want to see the madness in action, head over to podfeet.com/live on Sunday Nights at 5 pm Pacific Time, or if you can’t make it live, maybe the recorded shows will be fun to watch at the link in the shownotes: podfeet.com/youtube.

1 thought on “Software Video Switching with mimoLive on NosillaCast Live”