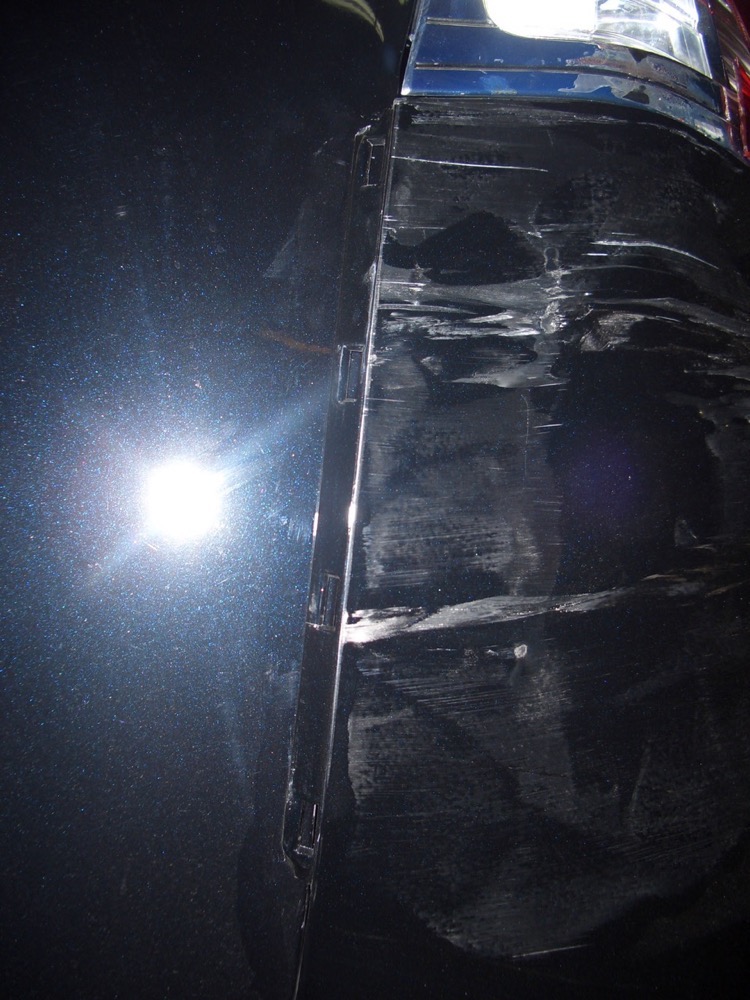 The day after Christmas in 2005, I was rear-ended when I stopped suddenly because of an unexpected pedestrian in the crosswalk. I was rather proud of my reaction to the accident at the time. It was a brand new car and yet my immediate reaction was, “thank goodness no one got hurt.”

The young man who hit me pulled over as expected, and as we exchanged insurance information, I pulled out my point and shoot camera (iPhone hadn’t yet been invented) and started snapping pictures of the damage to my car and more importantly to his car. I captured my smashed up bumper and the broken headlight on his car. I also made sure to get his license plate in at least one photo.

I thought maybe I would need those photos if at a later date he tried to claim he didn’t do it. He turned out to be a standup young man, and his mother’s insurance paid for the rather extensive damage to my new car. It all worked out and I never needed the photos.

Fast forward to August of 2007, when we took a trip to Italy. On our way back to the airport to leave for home, we were hit by a motorcyclist from behind on our left side as Steve made a left turn from the left lane. The motorcyclist used the oncoming traffic lane to attempt to pass us on our left on a city street.  To say this was a distressing situation would be an understatement. Was Kyle ok as it was his door that got hit? Was the guy ok? Was it our fault? Would we make our flight? How does one deal with accidents in Italy? We don’t speak Italian and the motorcyclist didn’t speak English which made it even more stressful. 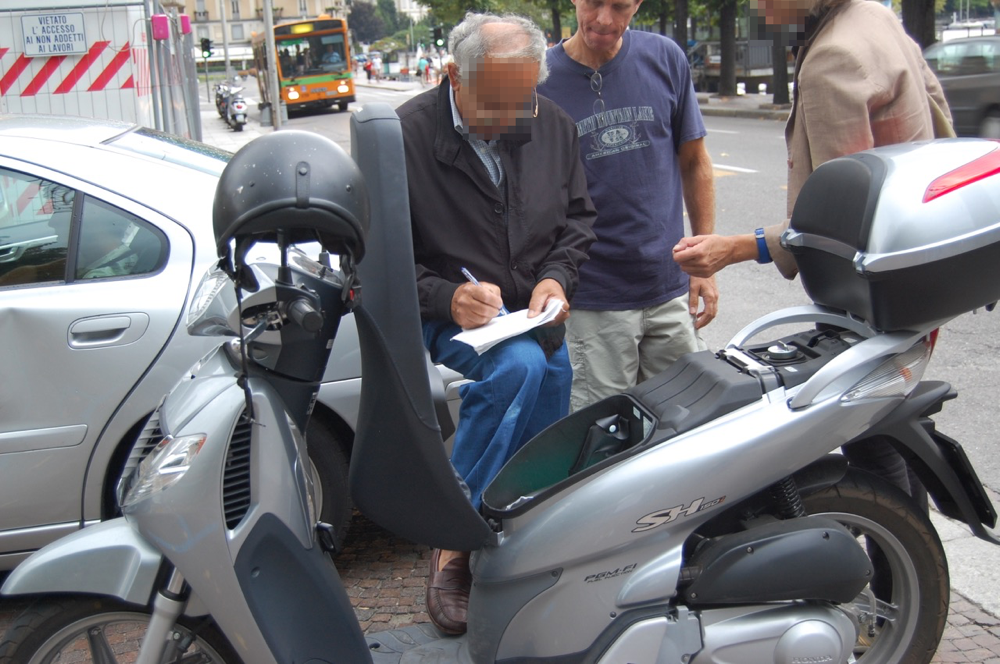 We pulled over, and the motorcyclist called his son who spoke some limited English. The son filled out some paperwork from the glove compartment of our rental car and had Steve and his father sign the document. Although the son communicated to us in English what he had written on the form, we had no idea what he actually wrote since it was in Italian.  It seemed we had no choice but to trust that he wrote down what he told us. While the paperwork was being filled out, I took out my Nikon D40 and started taking photos. I made sure to get the damage to our car, the damage to the motorcycle, and a photo of the intersection.

But probably the most important photo I took was when the motorcyclist used his right knee to support the document so he could sign it. This was important because he hit us on the right side of his motorcycle so if he’d injured anything it would have been that right knee. I figured if he came back later and claimed an injury I’d be able to show he wasn’t favoring that knee after the accident.

We went to the airport, the rental car agency asked for $1000 to fix the damage (sight unseen on the car) and we were allowed to go home and nothing further ever happened. My photos never were needed.

I told you the first two stories so I could tell you this story. Three months ago we got rear-ended on the freeway in Los Angeles. We were quite shaken as Tesla was right in the cargo area where we were hit, and more importantly, we had our grandson Forbes in the car with us. Fortunately, everyone was ok. 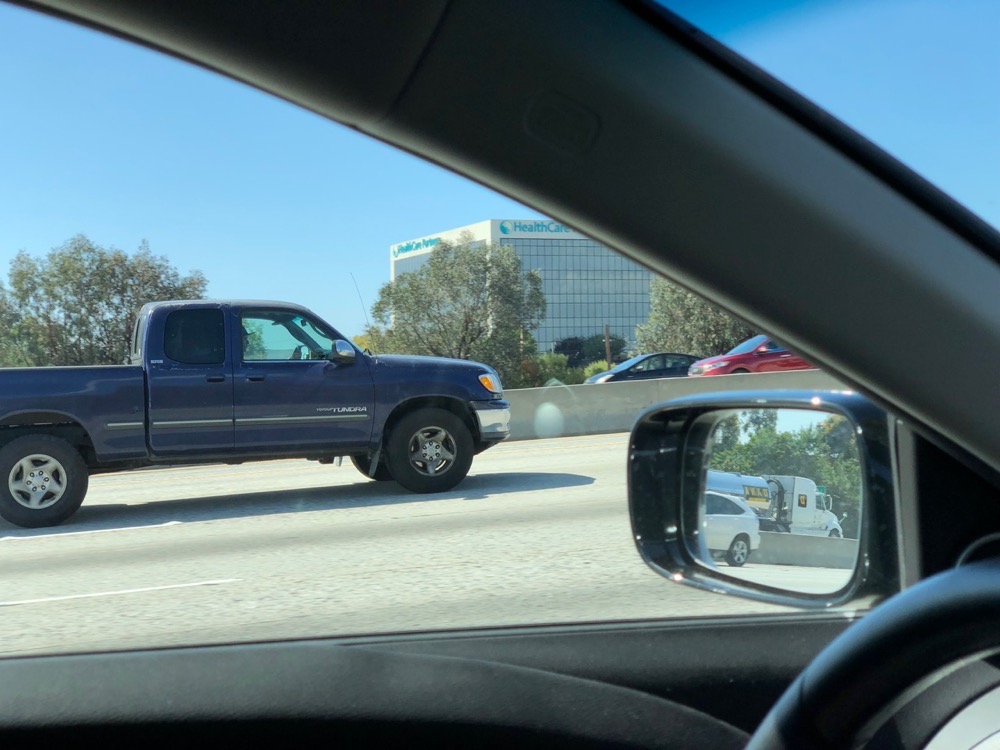 As he started this back and forth action, I grabbed my iPhone X and started to take photos as fast as I could. My hands were shaking with the adrenaline from the situation, so I got blurry photos of Steve’s headrest, the carpeting inside our car, and a partial shot out the back left window showing just a bit of his car. But I kept at it and eventually I got a shot of him as he got right beside us, showing a profile view of him wearing a baseball cap in the driver’s seat.

I kept snapping as he passed us to the left and sped away. Yep, it was a hit and run.

Steve pulled off the freeway at the first available opportunity and called the California Highway Patrol, or CHP as they’re called. While we awaited the CHP officer’s arrival, Forbes calmed me down and I calmed Tesla down. After that, I took out my phone and began to look at the pictures I’d taken. One shot showed the license plate at a distance, but it was too blurry to be read clearly.

It turns out, I had my phone set with Live Photos enabled. As we’ve discussed on the show before, the new HEIC format on iOS saves all of the data for every frame, so you can change the key photo to the best one. I scrolled back and forth and cropped in really close, and we had a good shot of the license plate that showed all but two of the seven characters looking pretty clear.

When the CHP officer came to take the report, I showed him the photo. He said he could only work with it if just one character was missing, but not two. We were disappointed with that. 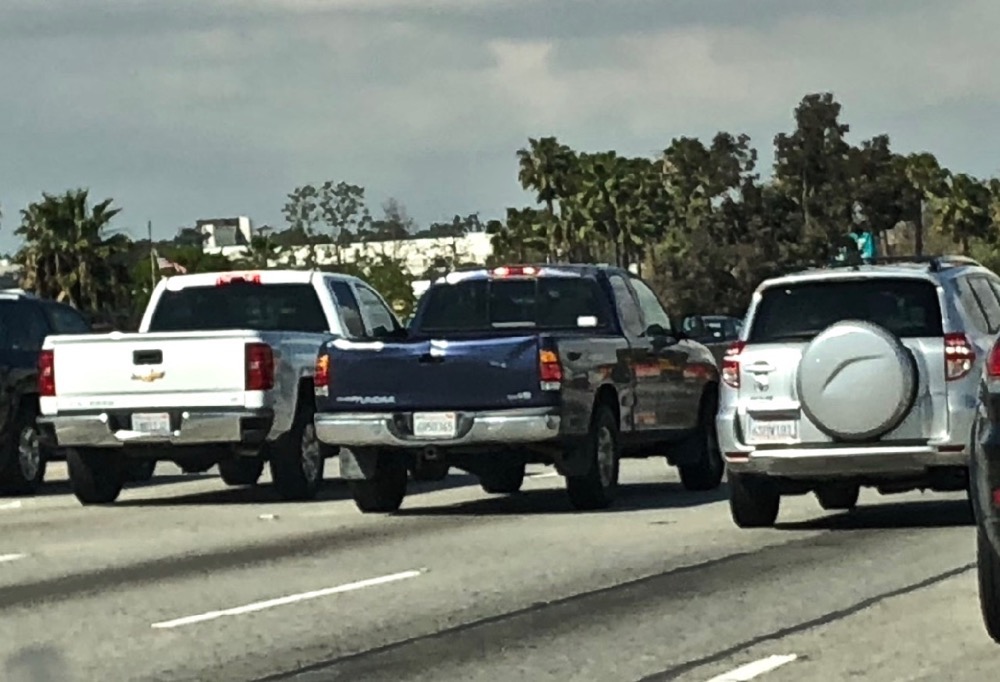 When we got home, I did a bit of googling and found that there are websites into which you can enter a license plate number, and if it’s a real registered plate, it will tell you the make, model, year, and color of the car. While the officer wouldn’t be able to dedicate the time to figure out what those characters were, what do you think two retired engineers did?

Of course I started by making a spreadsheet and entering the known letters into a grid and changing one letter at a time in the two missing positions. In the photo of the 7-digit license plate I’d taken, the second and fourth letters were blurry. In the googles, I discovered that the second digit on a truck in California is always a letter but cannot be an I, O, or Q. The other six digits are always numbers This information started to really limit the variables of those missing digits. We also had clues in the shape of the blurry characters to guide us.

I started trying out options for those missing positions and every once in a while I would get an exact match. While I wasn’t finding the car I sought, at least it encouraged me that the database was really working and if I got the right combination I’d be successful.

I thought I’d exhausted all of the options, so I handed it off to Steve. If you thought I was motivated to crack this code, imagine the vigor with which Steve attacked it! He kept at it for days, and finally he was rewarded. The correct two missing characters returned a blue 2001 Toyota Tundra with an access cab and four doors.

Remember the side view of him in the car? It clearly showed that it was a Toyota Tundra, and it had an extended cab and four doors. I think people heard Steve’s whoop of exultation a block away.

I’ll not belabor you with all of the details of the next few months, but using the photos and the correct license plate number, the CHP officer was able to look up the registered owner, and track the driver down. When he confronted the driver, he confessed to the hit and run. He was ultimately charged and convicted of misdemeanor hit and run and ordered to pay restitution for all damages.

While the pursuit of justice was part of our motivation, finding the driver was also of monetary assistance to us. We have uninsured motorist coverage, but it turns out if we couldn’t prove the driver was uninsured, we’d still have to pay our $500 deductible. Once they found the guy and our insurance company was able to determine he was uninsured, we were reimbursed for our $500 deductible.

The main point I wanted to make in telling this story is to suggest that in an accident, as soon as you’re safely off the road or if you are not driving, grab your phone and take as many photos as you can, and if you think of it, make sure it’s in Live Photos. If your phone doesn’t have Live Photos or if you’re not sure it’s enabled, use burst mode by just holding down the shutter button.

I know it’s stressful and I know it’s hard to do and I know it might feel intrusive to take photos of someone who just hit you (or even whom you just hit), but do it. With any luck, you won’t ever need these photos, like we didn’t the first two times. But if you ever do have a problem later, they might just be really helpful.