One of the biggest takeaways from Macstock Expo is how relaxing and comfortable it is to be surrounded by people with the same interests as you. If you’re anything like us, you’re often in the company of lovely people, but it can be hard to find things to find things to talk about with norms.

When we arrived in Chicago, NosillaCastaway and now good friend Corky Heath picked us up from the airport along with John F Braun of Mac Geek Gab fame. Corky is a great guy and awfully generous with his time. As soon as we met last year for the first time, we knew it would be an easy and comfortable drive because we naturally started talking about the Mac and iOS.

Macstock Expo this year had a great format. We had sessions from 9 am to 5 pm, and then at 6:30 there was a heavy appetizer party at a restaurant/bar right next to the hotel where most of us were staying. The amazing Barry Fulk and his even more awesome wife, Bobbi Anne put it together.

You could just walk up to any table of people and say, “Hi, I’m Allison” and you’d immediately be amongst friends. Ok, maybe you couldn’t say Allison but you get what I mean, right? You’d notice someone’s iPhone case, or they’d start using an app you hadn’t seen before, or maybe they had a cool Apple Watchband or a tech problem they wanted help with. Who amongst us wouldn’t love that? 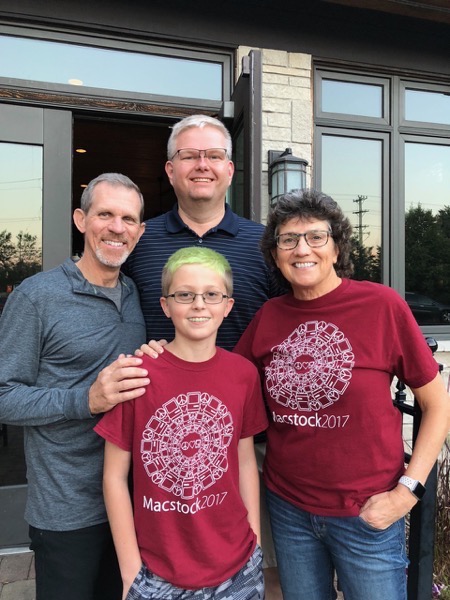 We enjoyed spending time with NosillaCastaways Ian Prinssen and his young son, Daniel. Daniel is a seasoned veteran of Macstock Expo as he went last year as well. Towards the end of the last party evening, he told me that he figured out the percentages on Macstock Expo. He explained, “It’s 50% the people, 1/8th learning, and the rest is comedy.” I loved it!

I can prove Daniel is right. Whenever someone starts to take a picture of me, I like to say, “Make me look skinny!” It usually gets a laugh. But when I said it to Bobbi Anne, her response was, “It’s not a magic camera!” That cracked me up!

Another people story. On the very first day, a gentleman came up to me and introduced himself as Father John Long. I couldn’t believe it. John and I have been corresponding for over a decade about the podcast, and he’s been listening since day one!  I hugged a man I’ve never met because I already knew he was a dear friend. I get tingles just remembering how floored I was to finally get to meet him in real life. 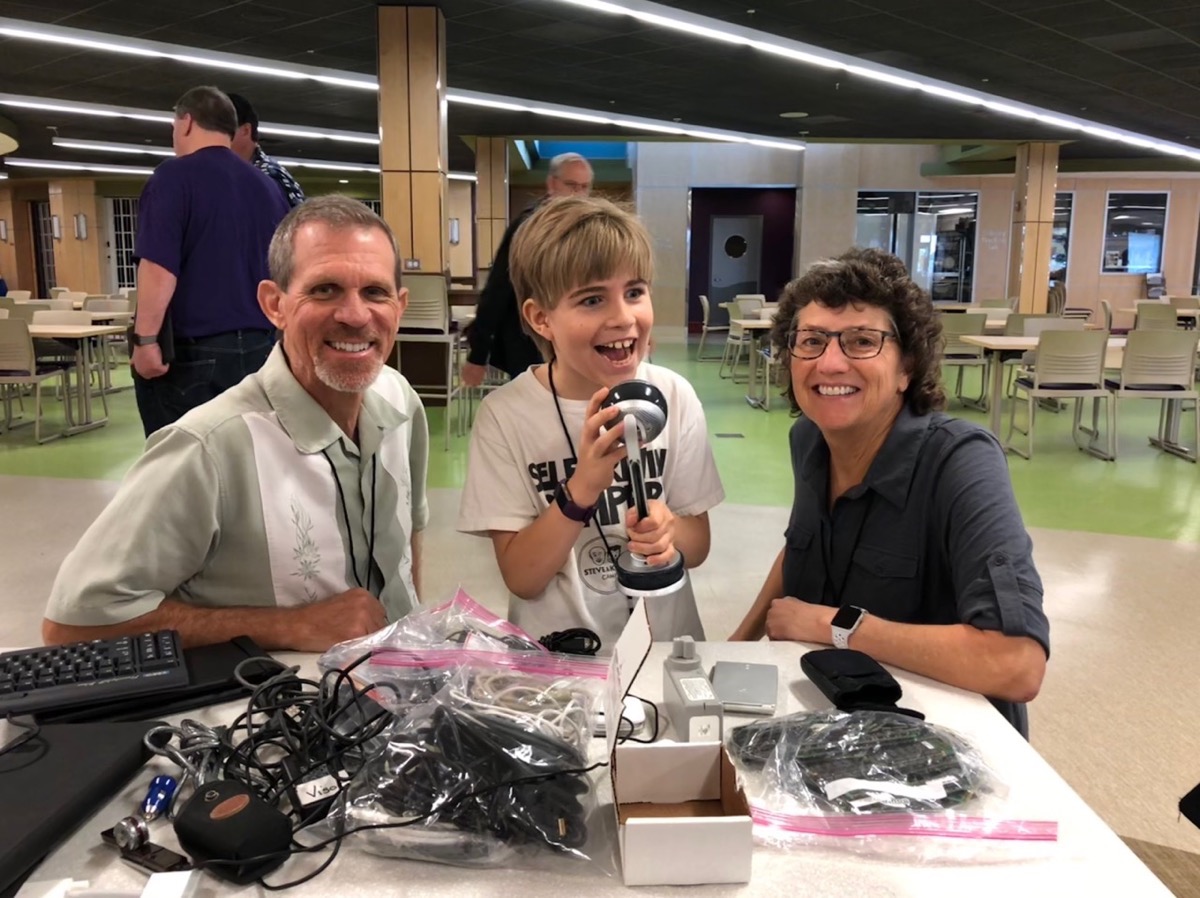 Another thrill was when Steve and I got to meet one of the youngest NosillaCastaways, an avid member of the live chatroom (on Sunday nights at 5 pm Pacific Time at podfeet.com/live). It was none other than Toby, aka TJPK. He was delightful and seemed to have a fantastic time.

One of the Tucson Mac user groups drives all the way from Arizona every year and they lug along old computer gear and set up the Macstock Swap. The idea is you can bring your old stuff too and everybody gets to look for hidden gems. This was essentially like a candy store for Toby. He spent most of his time looking at these treasures with his dad MIchael, who is a historian who is a professor of Digital History. Amongst other things, they took home an Xserve and a Mac Classic! I’m not sure who was more excited, Toby or his dad!

Daniel and his dad, Ian, took home two cheese grater Mac Pros, and they’re going to make a glass coffee table with the Macs as the stands. Isn’t that the coolest idea? I made Daniel promise to send us some pictures when they get it done.

There is danger in starting to name people because I won’t have a story about everybody I talked to, and I talked to everybody. One thing that made me happy was to see so many NosillaCastaways from the live show. Beyond the people I already mentioned, Brett Canedy, Norbert Frassa, Rick Cartwright and Frank Petrie were all there too. 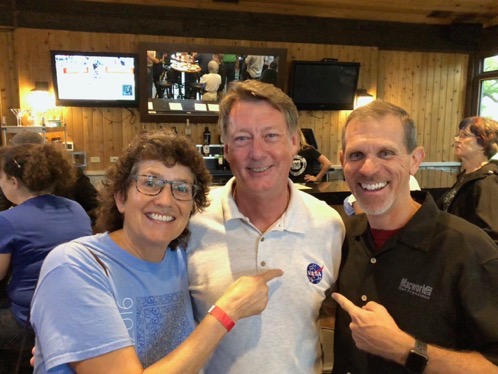 Another exciting first-time meet up was when Steve and I got to meet John Ormsby in real life, known in the live chat room as NASA_Nut. He was as delightful as we’d hoped. He brought a kids book written by an astronaut for our grandson Forbes which cemented his place in my heart. He and Steve geeked out about the Space Launch System which is what John is currently working on at NASA’s Marshall Space Flight Center in Huntsville, AL. 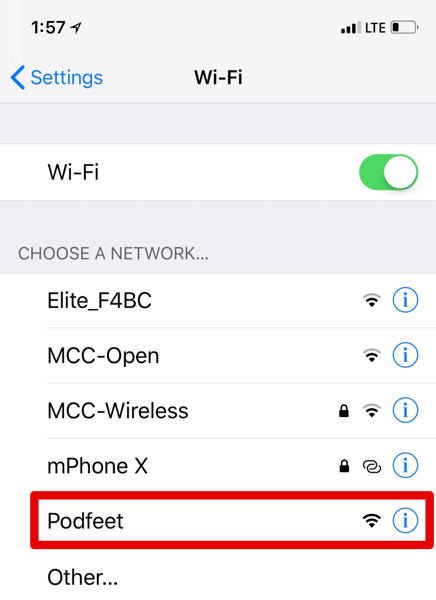 During lunch, Lynda Gousha, whom you’ve heard before on the show and a regular on Bart’s Let’s Talk Apple, came over to tell me something. She showed me her phone on the available WiFi networks page. She pointed out that my phone’s hotspot called podfeet was unencrypted and thought I’d want to know.

I explained that my hotspot wasn’t called podfeet. But clearly, someone was messing with me. With around 150 people in the room, I suddenly realized I knew exactly who would do this. I knew it had to be Toby. He’s wicked smart, playful, and loves to experiment and push the boundaries of everything. Sure enough, I finally found Toby on the ground between two tables with a Linksys router he’d just found on the Macstock Swap table and he had named the network podfeet. I love that I knew it had to be him. 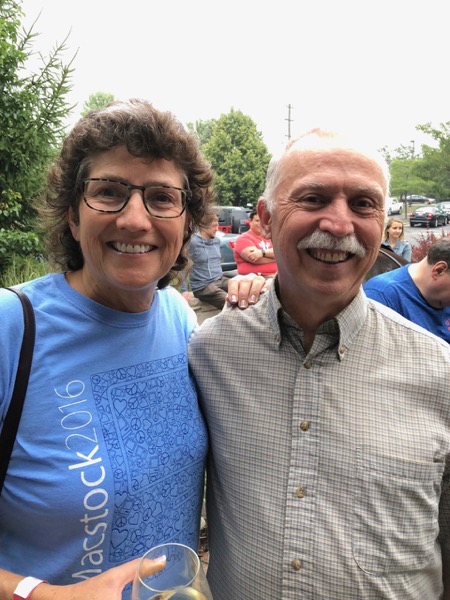 On the first night at the first party, Dennis Jurgensen made a point of coming up to me to tell me how much he loves Programming By Stealth. He’s a programmer but he had specialized in Java and has been finding learning JavaScript from Bart a fantastic experience. I think the reason I liked Dennis so much was that he confessed that he’s often screaming into his device when I’m not getting something Bart is trying to explain. That proved that he’s listening and following along!

I can’t thank Mike Potter and Barry Fulk enough for putting together this extraordinary event. We played (Steve and I even did Karaoke), we learned, and we had an absolute blast. I’ve already written to our daughter Lindsay telling her in 2019 she’ll have to postpone our grandson’s birthday party yet again because Macstock Expo is the same weekend!