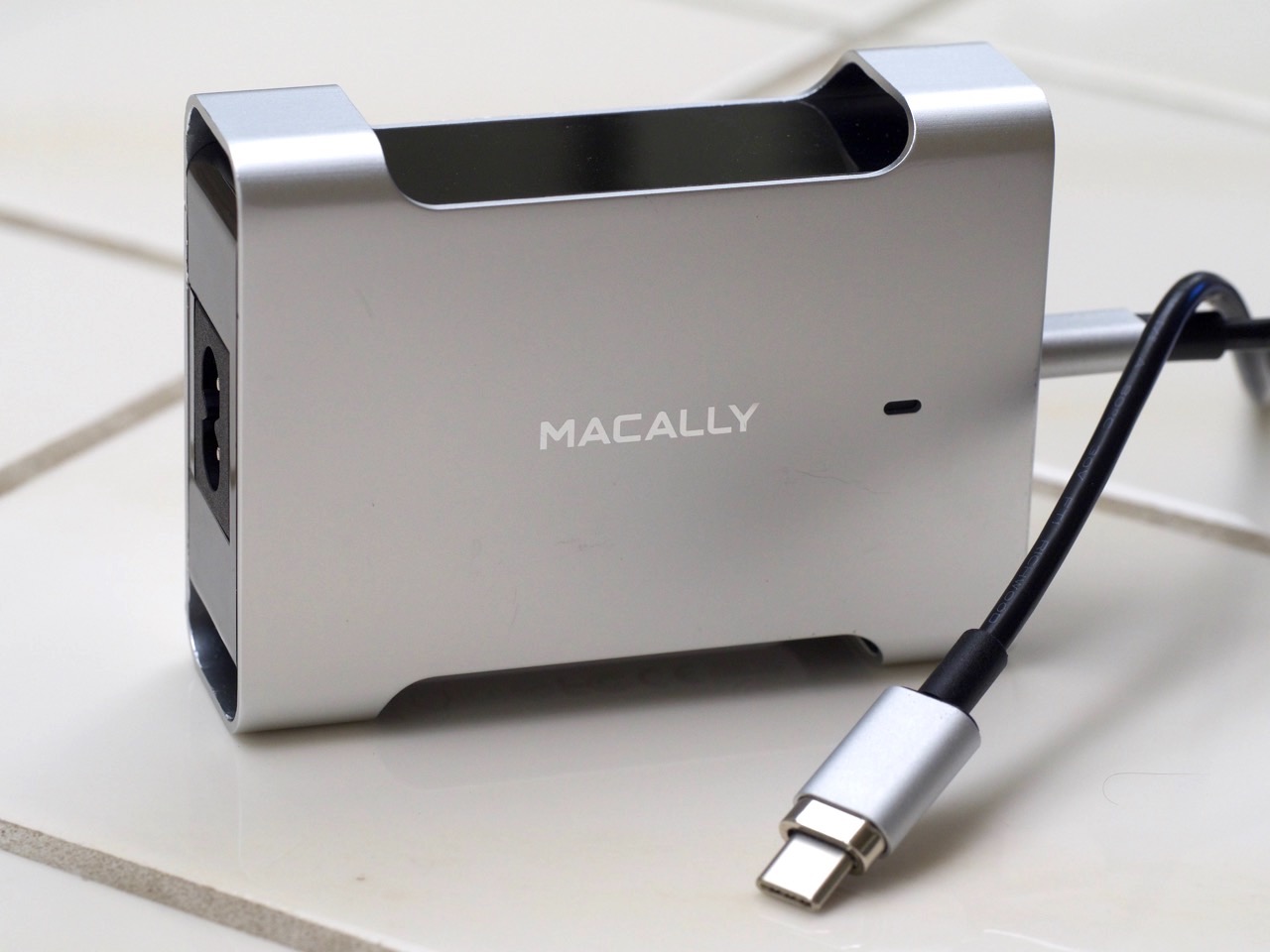 Since we’re on the theme today of charging laptops, I’d like to tell you about the Macally MacBook Pro Charger. We’d best start with a problem to be solved though, don’t you think?

If you want to actually plug it in, you’ll need to spring for at least the $19 USB-C cable (or buy from a third party) and another $19 if you want or need the extension cable, for a grand total of $107! Walking up and down those stairs to go get your power adapter is sounding pretty good at that price, plus you get exercise on your Apple Watch!

But who amongst us hasn’t wished for a second power adapter to keep in our travel bag or maybe to use downstairs while watching TV? Also, how many of you wish you had a Magsafe connector like the good old days? USB-C charging has a ton of advantages (one of them being third parties can make power adapters since there is no longer a proprietary connector involved), but darn, Magsafe sure did save a lot of laptops.

I received a USB-C cable with a magnetic connector a while back and it was so lame I returned it to the company (with an explanation of how they could do better).

Enter the Macally MacBook Pro Charger with Magnetic USB-C Cable. I received one of these as a review unit from Macally and I’m pretty taken with it. As with all Macally products the design is beautiful. It’s a bit bigger than 4 x 3 x 1″, think palm-of-your-hand sized, and reminds me of a tiny version of the old Power Mac G5 tower. It has a brushed metal case with indentations that look like the handles on the old G5. It comes with the extension cable and the USB-C cable for the same $69 Apple charges for just the charger block. So we have a win on the money front right there.

The Macally adapter is a bit lighter, weighing in at 12.3oz vs. Apple’s at 13.4oz. I don’t think it’s enough to make a difference (especially since I carry a 1.9lb battery now) but at least it’s not heavier. 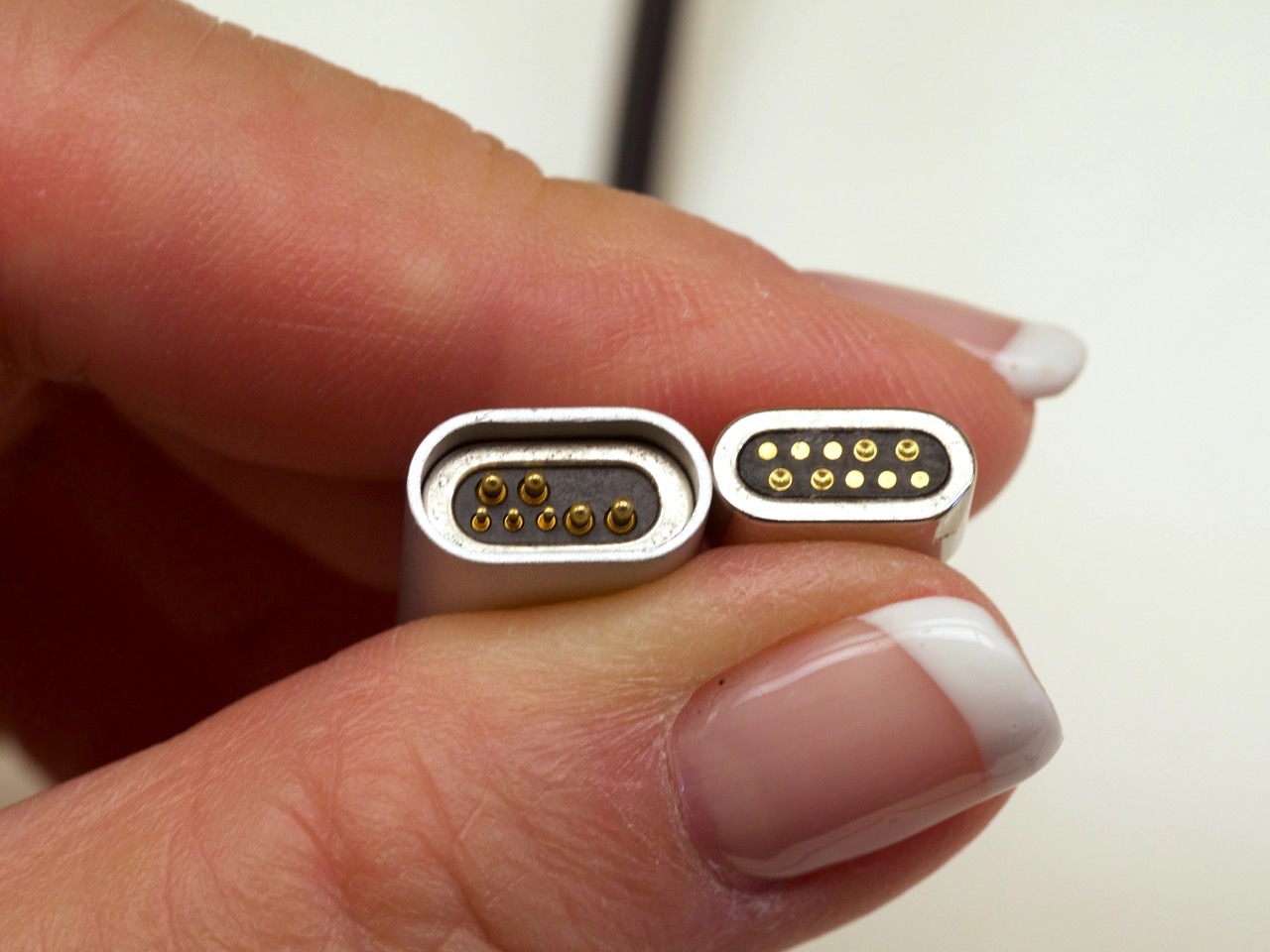 The magnetic USB-C cable is interesting. One end is a standard USB-C connector, but the other end is non-standard. The end that goes into your Mac has a tiny adapter piece that’s USB-C on one side and connects magnetically to the cable side. But keep in mind that it can’t just be a magnetic connection, it has to pass the signals and power through as well. I’m going to try to describe the pin-outs on this connection because it’s different from anything I’ve seen before. If it’s confusing, I’ve included a macro shot of it in the shown notes.

The wire side has 7 pins. The top row is 2 large, round-headed gold pins, while the second row has 3 small rounded pins and then 2 larger round pins. The two large pins on the top row are above the 3 small ones on the second row with blank space next to them.

The adapter side has two rows of connection points that I’ll call “pins”. Both rows have 3 pins that are flush to the surface, and 2 pins that are essentially indentations into the gold. The 2 rows are flipped from each other so the upper row is 3 flush and 2 indents, while the row below is 2 indents and 3 flush. The magic of this odd pin configuration is that you can flip the magnetic connector around either way and it always works. I was a little worried at first that one of the great joys of USB-C of reversible connectors would be lost, but it’s not.

A magnetic connection’s value is determined by the delicate balance of how well it holds on when it should, and whether it disconnects when required to avoid accidental damage to your laptop. The magnetic connector on the Macally cable is pretty strong and yet did come out when I pulled on it at an angle.

I did find a few cases where it disconnected, and I’ll let you decide if this is what you would want it to do. I was testing the device sitting in bed with my MacBook Pro and as it sank into the pillow on which it was resting, the connector broke loose. I’m not sure that counts as a failure, as my conditions were putting stress on that connection. Another time I picked up the adapter to look at it when I was trying to think of how to describe it, and I didn’t notice that I had pulled on the USB-C connection. A few minutes later I noticed that my Mac wasn’t charging and sure enough it had popped off. Again, that’s probably what it should have done. The old Magsafe connectors had a green LED indicating power was passing through them which was a nice feature. But with the Macally cable, you’ll have to rely on the battery indicator of your menubar (or look at the connector because it’s pretty obvious when it’s been knocked out.)

I guarantee that you will pull the cable out and forget the magnetic piece plugged into your USB-C port. I did it about 25 times while testing. It’s not the easiest thing to pull out because it’s quite tiny and short so gripping it a little troublesome. When you pull on the cable, you can’t pull straight out and get the adapter to come with it either. You have to pull with your fingers grabbing the adapter piece at the same time. It’s definitely not a dealbreaker, and I think I could get used to doing it that way if I used this device as my daily driver.

If you were to lose the magnetic USB-C end, this cable becomes worthless. You’d eventually figure out which computer you left it plugged into, and it’s not going to fall out of it, but it’s a caution to stay vigilant when unplugging this cable. I’d like to see Macally offer replacement magnetic USB-C adapters on their website but I wasn’t able to find them just yet.

On the flip side, there’s nothing proprietary about this cable with its magnetic USB-C adapter that would preclude you using it on any other USB-C device, like the Google Pixel phone or any other kind of USB-C powered device.

I like the MacAlly MacBook Pro Charger with magnetic USB-C very much and can definitely recommend it as a spare power adapter for your 13″ MacBook Pro or other devices requiring 61W of power.

That said, I gave it a whirl on my 87W hungry 15″ MacBook Pro and it even charged my Mac from 17% to 100%. It didn’t seem as snappy as a full-sized charger, but I didn’t do rigorous timing tests. I’ve read a lot and discussed with my resident electrical engineer Steve about what harm can come from using a lower-powered adapter with a device. It seems that the Mac (or possibly the power adapter) has circuitry inside that will protect itself from damage by using a lower-powered charger, but I can’t find any definitive answer on whether the charger will damage itself trying to supply my power-hungry Mac. Like I said I’ve researched this a lot and can’t find the definitive answer on this. I believe, like many things in the electrical engineering field, “it depends.” And again, that’s why I’m a mechanical engineer.

Sadly, Steve read this review, and promptly took the Macally charger away from me and put it in his backpack.