When it comes to task management apps on Apple platforms, there has long been a gold standard in the Omni Group’s OmniFocus. I’ve been invested in OmniFocus for over three years now and admire the fit and polish of the product, but I’m at a point in my life where its complexity is now overkill and, well, I’m falling out of love with it.

One of the few uses I have for Siri is setting reminders, as I often think of things I need to add to my list when it’s not terribly convenient to stop, open an app, tap around, and type out the reminder. As of iOS 11, it has been possible to direct Siri to add a reminder directly to OmniFocus. Or rather, theoretically possible.

In my experience, Siri tends to cut me off before I add “in OmniFocus” to the end of my sentence, and sometimes I cut myself off because it’s just not a natural thing to say. It has been so frustrating that I simply stopped doing it, or on the few occasions I decided to use Siri, I just let the reminder go into the default Reminders app.

Last November, my eye was caught by a headline on MacStories.

I’d been vaguely aware that some apps directly used Apple’s Reminders data, but I had not given any a try in a long time. I started reading the MacStories post and the more I read, the more I liked. The benefit of this approach is I don’t need to direct Siri to put the reminder into a specific app, but I still get a nice interface and a few extra features over the default app.

I liked the look of GoodTask and downloaded it on my iPhone to have a go. GoodTask gives you 14 days of full functionality before you have to decide whether to pay, and this was plenty for me to make that decision. I chose to make a one-time payment to unlock the app and then installed it on my iPad as well. Mostly I use my iPhone to manage tasks, but if I happen to be using the iPad when something crops up, it’s right there. As some of my tasks are 100% going to be executed on the Mac it’s very useful to have it there as well, so I’ve also paid for the Mac version now.

So what are the features of GoodTask that make me happy? 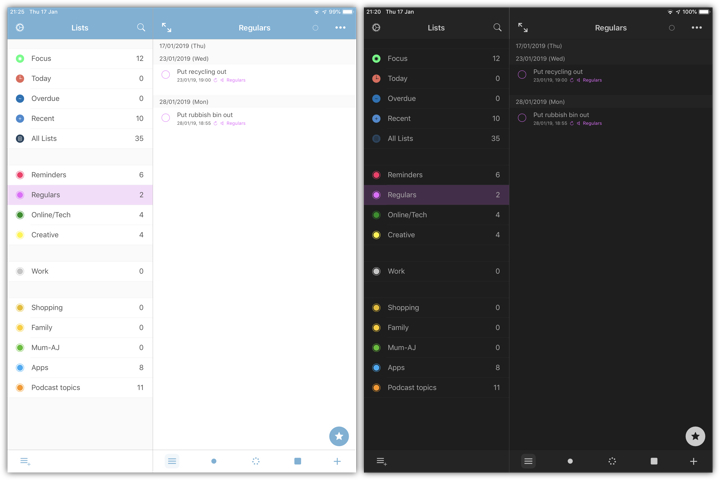 Themes are much appreciated. Everyone has their colour preferences and at the moment I like my utility apps to have a dark theme. GoodTask delivers on this with a handful of predefined choices plus the ability to go completely custom.

Smart lists are a really useful feature. I’ve got a number of lists for different purposes, some time-critical, some “one day”, so only a subset of those need to remain front of mind. I have a Smart List I call “Focus” which includes tasks from those important lists that are either due in the next three days or have no date set. Each actual list has its own colour, so in the Smart List I can easily see the nature of each task from the colour.

You can also show calendar appointments in the GoodTask views. This is incredibly handy for an overview of what I’ve got on. It’s interesting that I also recently started using BusyCal (for many of the same reasons) and it includes reminders in its calendar views.

Quick Actions are just superb. When you create a task, you get the usual selection of fields to fill out, but a simple swipe on the screen takes you to a grid of Quick Actions. A standard set is provided, but you can create your own and customise the existing ones as you please. What is a Quick Action? It’s a button that sets some aspect of a task. I have a button for “Tomorrow at 9:00am” for things I expect to do when I’m at work, and another for “6:30pm” for things I expect to do when I get home from work. I’ve also got buttons for “plus one day” and “plus 2 hours,” and (a default) one to clear the date and time. But you can have them set more than just times. Priority, tags, alerts, repeating, and more can be set. I also have three buttons that allow me to instantly allocate a task to one of my three most commonly used lists.

While your basic lists will intrinsically sync between devices because they are internet-based, you can also sync your GoodTask preferences using iCloud. A nice touch, as tweaking a Smart List on one device will see the changes propagate to all other devices automatically.

There are numerous other features and many configurations you can make to personalise GoodTask. I’m slowly exploring further in the app to find these and see if they add value for me.

This is not intended to be a comprehensive review, as I have deliberately focused on what makes GoodTask great for me and glossed over some of the important implementation details (like how features not in Reminders are implemented). It would be remiss of me, however, not to mention the price.

GoodTask is also available with a Setapp subscription.

There are two ways to pay for GoodTask for iOS, both achieved by in-app purchase. As stated earlier, the app is fully functional out of the gate for no outlay, but stops working after 14 days. At that time you can choose either to pay a one-off charge of USD$9.99, or a subscription of USD$9.99 per year. The difference? If you subscribe, you’ll be helping to support the developer to keep GoodTask up to date. There is no functional difference between the two options for the user.

The macOS version of GoodTask also has a 14 day trial, after which it will cost you a one-time purchase of USD$19.99 to unlock. Feature-wise, the macOS version is identical, but takes advantage of the environment very well, to see more information at once.

GoodTask strikes a great balance between the rudimentary Reminders and the full power of an app like OmniFocus. It offers the advantage of system integration for its data source, meaning Siri, Shortcuts, and Automator can easily be made to work well with the app. It is also easily personalised and has a clean design language. I find it a pleasure to use.

3 thoughts on “GoodTask 3 Task Manager for iOS and macOS”