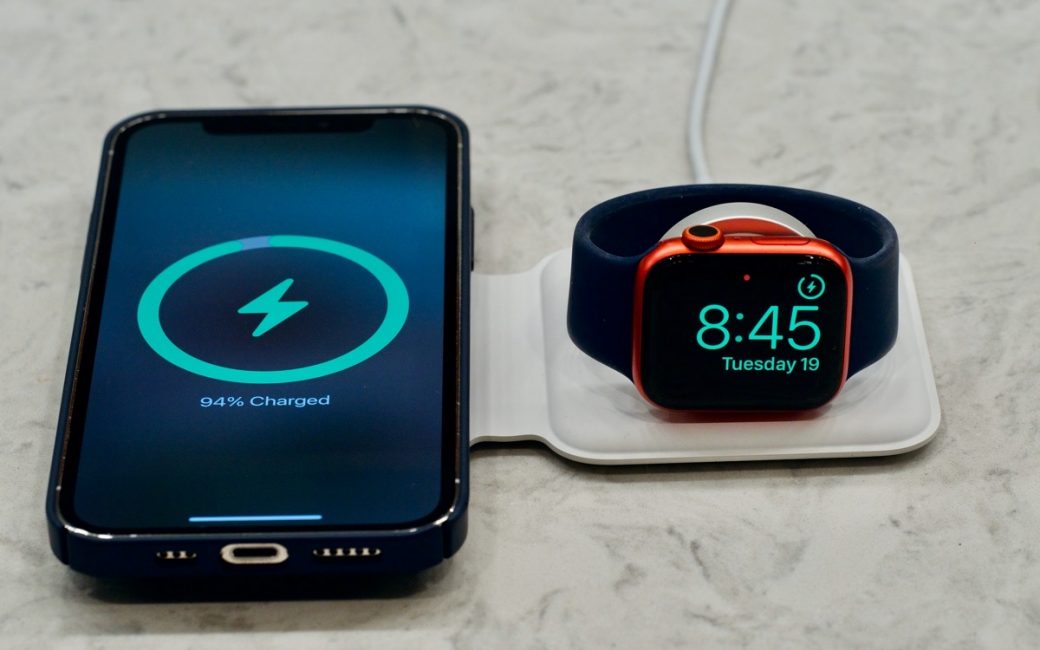 I obviously don’t do much traveling right now, but when Steve and I do travel, about 1/3 to 1/2 of what we pack is electronics, cables and chargers. I don’t even go to dinner at our son Kyle’s house without a backpack containing a laptop, iPad and all the chargers and cables.

Like most of us, I continue to seek simplicity in charging when I travel. One thing that has made it easier for me is the Omni 20 USB-C Power Bank I told you about in the middle of 2019. This is a 72Wh battery with 2 USB type C ports and 2 USB type A ports. On travel, I put the Omni 20 by my bedside at night, and hang a cable off of it to charge my phone and the charging puck to charge my Apple Watch. Technically the Omni 20 supports Qi charging on top so I could charge my phone that way, but like many Qi chargers, placement is tricky to get just right and the phone can easily get bumped around, so I stick with the cables.

During the day, I plug my laptop and iPad into the Omni 20 and also plug the Omni 20 into an outlet to charge both the battery and my devices via USB type C.

With the Omni 20 in my bag, I don’t have to pack a charger block for the Apple Watch, one for the iPhone, one for the iPad, and one for the Mac, I only have to carry one small GaN charger for the Omni itself. When it’s charged up, I can move the battery around to wherever I need it and share some juice with fellow travelers. It’s more space-efficient, but at night it is still annoying to have the rat’s nest of cables hanging off the charger. I know it’s only a rat’s nest of two cables but they’re both long and tangly.

As a possible simplification, Steve got me the MagSafe Duo Charger from Apple for Christmas. When it was initially announced, there was a lot of complaining about the price. The MagSafe Duo Charger is $129, which is definitely not cheap. Keep in mind though, that it comes with the Apple Watch charging puck, which is $29 if you buy it standalone, and the $39 MagSafe charger.

If you wanted to, you could justify the purchase by saying it’s only $61 for the MagSafe Duo since you’d be buying the pucks anyway? Now it doesn’t sound so bad. I’m still not sure I’d recommend buying it, but for a completely different reason, which I’ll get to in a moment.

I really like the industrial design of the MagSafe Duo. It’s two white plastic squares that are connected at a flexible joint which very satisfyingly snap together via magnets. You can flip it shut like a tricorder but sadly the magnets are too strong to flip it back open.

Embedded in one side is a MagSafe charger, and in the other half is an Apple Watch charger puck. Easy enough to rest your phone on one side, and your Apple Watch on the other side. My current favorite watchband is the Solo Loop (navy blue with the red Apple Watch is simply stunning), and at first, I wondered how I’d use this charger since the puck is embedded flat to one side.

I then realized that the little watch puck rotates up 90° so you can easily slide the watch onto it with any kind of band. In fact, it is much more elegant with the Solo Loop because, with a normal watchband, the band halves stick out to the side with one half resting on your phone.

I mentioned that I don’t use the Qi charging option on the Omni 20 battery because it’s fiddly to align the phone properly to get a good charge, and it’s too easy to knock it away from the right spot.

With MagSafe, there’s no question about when you’ve aligned your iPhone properly on the charger. The phone makes a very satisfying thunk sound out of its speakers, then it makes the normal happy charging sound, and there’s a graphic of a giant green circle on the display. Even if you can neither see nor hear, you can feel when the phone is securely connected to the magnets.

At this point, you’d think I’m a big fan of the MagSafe Duo Charger, but there’s a big problem. The Duo comes with a Lightning to USB-C cable, which is lame, should be all USB-C by now, and does not come with a charger block.

You might think I’m being a whiner like all those bellyachers about the iPhones not coming with a charger block but let me defend my whining. Apple justified the iPhone not coming with a charger by pointing out that pretty much everyone already HAS a charger. Oddly they included a Lightning to USB-C charger cable (like with the Duo charger), and hardly anyone has USB-C chargers yet. But most people who buy Apple products have Lightning cables so that was still ok in my opinion.

With the Duo though, you can’t apply the same logic, because the Duo requires a 20W charger. Look around at the chargers you own – how many are 20W? And more importantly, can you tell which ones are 20W?

I have two chargers plugged into the outlet above my bathroom counter. They look identical. One is powering my HomePod mini, and the other is used to charge my 12.9″ iPad Pro. These two USB-C power bricks are both from Apple and they look exactly the same. If you look at the plug side though, they’re ever so slightly different.

The one that came with the HomePod mini says 20W in lettering inside a rectangle. The one I’m using for my iPad Pro has no such lettering. To figure out what level of power this charger can provide, I needed to use the magnifier option built into the iPhone.

Since I’m an engineer, I happen to know that power in Watts is equal to Voltage times current which is measured in Amps. On the bottom of the mystery power brick it says “Output: 5V” followed by a solid line above three dashes and then followed by “3A”. I’m a mechanical engineer, so I didn’t know what that meant. I did some searching and discovered that the solid line over the three dashes simply means DC, or Direct Current. That’s as opposed to AC, or Alternating Current, which is shown with a sort of sine wave if you know what that is.

It’s irrelevant for our MagSafe Duo Charger because both 15W and 18W are under what we need for the Duo. The one that looks exactly like it but does say 20W underneath does indeed work with the Duo.

Here’s another example. I use a CalDigit TS3+ dock for my MacBook Pro and my display. I’ve got a bunch of USB devices hanging off of it too. On the front, there’s a USB Type C port and a USB Type A port. I plugged the Lightning to USB-C cable that came from the Duo Charger into the USB-C port on the dock, and my phone would charge. Ok, great. But then I tried a Lightning to USB-A cable and the phone would not charge. There’s no lettering whatsoever on this dock to tell me how many watts or volts and amps it can supply.

I looked up the specs on my dock and the USB Type C and Type A ports both say 5V 1.5A, which is only 7.5W. So why does the Duo work with the USB-C port on the CalDigit TS3+ work at all? I thought maybe it was because I was only charging my phone on it, so I dropped my Apple Watch onto the Duo puck and sure enough, I can charge both my iPhone 12 Pro and my Series 6 Apple Watch at the same time on a port that’s only supposed to be supplying 42% of the power required.

I’ve got a Hyper Juice charger with two 100W USB-C ports and two 18W USB-A ports on it. I had to give this a try just for grins and giggles. Not surprisingly the 100W USB-C ports will charge the watch and phone on the Duo, but the 18W USB-A ports will not. Well at least THAT one makes sense, and Hyper was kind enough to label the ports with the Watts they can supply.

I am, of course, not the only one to find flaws with the idea of not giving you the right charger for the MagSafe Duo charger, and others have found out some even more weird things you need to know about charging.

Let’s just keep reading this support article about the Duo because I’m sure things will become more clear.

In a section about fast wireless charging specifically for iPhone 12 models, it says: “The MagSafe Duo Charger is designed to negotiate the maximum power up to 9 volt (V) and 3 amp (A) with a USB PD compatible power adapter.” If my cipherin’ is correct, isn’t 9×3 = 27W? And there was no prior mention of PD, which they don’t define.

According to an article on www.goalzero.com/… the people who make solar chargers,

Power Delivery (PD) is a specification for handling higher power and allows a range of devices to charge quickly over a USB connection. It operates by facilitating a conversation between two devices to negotiate a power contract so they can determine how much power can be pulled from the charger.

Does this mean to provide max power we need a 27W adapter when we were told we only needed 20W? And could we get a hint on how to know if the adapter we have supports Power Delivery?

I’m very glad that the Omnicharge Omni 20 Power Bank I talked about at the beginning provides 60W PD on its USB Type C port, because I’m pretty sure 60W is bigger than all of these other numbers. I didn’t trust them though after that “doesn’t work with 29W adapter” foolishness, so I tested the 60W USB-C port on the Omni and it worked to charge my phone and watch with the Duo. No clue if it’s fast charges of course.

I’m going to bottom-line it here. The MagSafe Duo Charger is pretty cool and I’m glad I have it for travel, but I would definitely not recommend it for a normal person unless I told them that they HAVE to buy the Apple 20W USB-C Power Adapter for $19 to make it work. Or better yet, to poke Apple in the eye for doing this to us, I’d suggest they buy the much smaller and less expensive Aukey Omnia 20W for $15 It’s the same size as the original 5W charger for iPhones but will charge a Max-sized iPhone to 50% in 30 minutes.

I think the best way to sum up the MagSafe Duo Charger is, “It just works” … except when it doesn’t because you don’t have an electrical engineering degree.