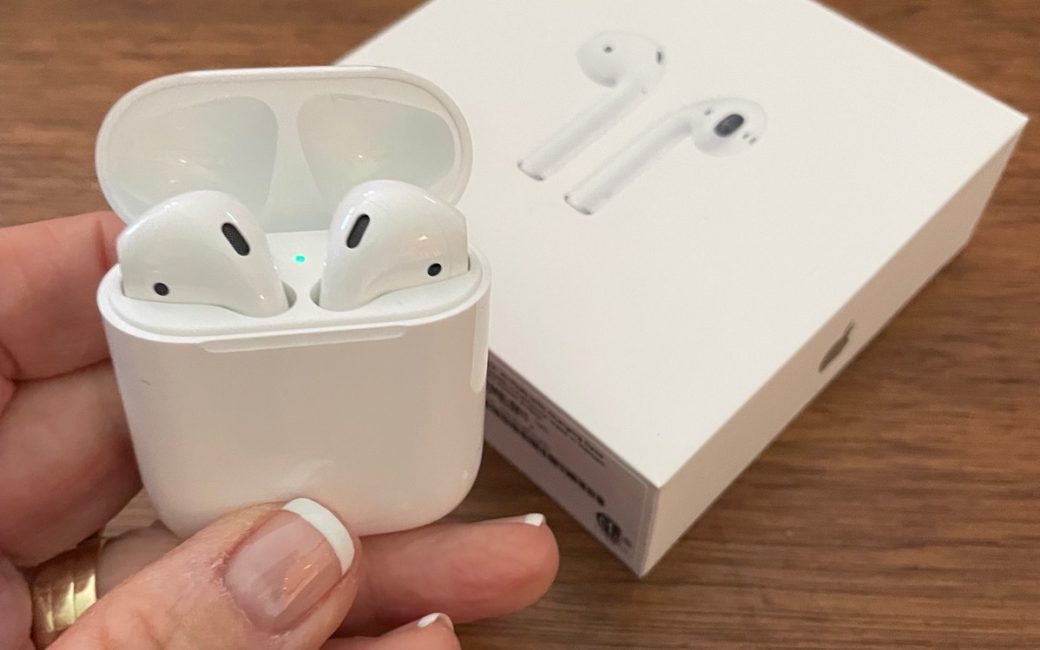 There are a number of things I dislike about the AirPods Pro, but the number one thing is that they fall out of my ears. I replaced the original ear tips with some from Comply that did absolutely nothing to keep them in my ears. Then Frank told us about the CharJen ear tips, which helped a lot. But even with the CharJens, there’s overhead associated with using them.

To get them to (mostly) stay in your ears, you have to squeeze the foam, put the AirPod into your ear with the stem pointing out from your face, then rotate the stem downwards, and hold for a few seconds while the foam expands into your ear canal. This works much better than just shoving them in your ears and hoping for the best.

When CharJen sent me their ear hooks, that’s when things got a lot better. I still have to do the squeeze, rotate, wait dance to get the AirPods Pro properly sealed in my ear, but the ear hook is what actually keeps them from falling out. While they don’t fall out, they do sort of ooze out of my ear canal so I have to keep shoving them back in so they fit properly.

The only nice thing I can say about the AirPods Pro over the original ones is that the stem being shorter reduces the chance that I’ll accidentally knock them off when brushing hair out of my face when I’m running. It reduces, not eliminates the chance.

Putting on the ear hooks only takes a few seconds so it’s not a huge deal, but it is time I don’t enjoy adding to the squeeze, rotate, wait dance. The other problem is that about 75% of the time, I put the wrong ear hook on the AirPod. They’re like USB cables, more often wrong even though you should have a 50/50 chance of getting it right. I know what the ear hooks should look like when installed on the AirPods, but for some reason, I have a very low probability of getting it right on the first try.

Both the AirPods and the ear hooks have the letters L and R on them, but neither are easy to see. I have X-ray vision since my cataract surgery but I still have to hold them up to the light and study for a bit to tell which one is which. For some reason, the shape of the AirPods Pro, even after a couple of years of using them, does not scream right and left to me.

This brings up another problem. I don’t think I’ve ever put them back in the case on the first try without mixing left and right. I’ve got a trained and genetically acquired engineering brain that sees geometry instinctively. I can screw on a nut on a bolt that’s upside down under a table without having to think which way is clockwise. But I’ll be darned if I can tell right from left on AirPods Pro.

I do like the noise cancellation on the AirPods Pro, but I truly hate the transparency mode. It sounds to me like they take all of the highest frequencies in your surroundings and amplify them. On top of X-ray vision, I happen to have stupid-good high-frequency hearing. Believe it or not, I can still clearly hear that frequency that only teenagers are supposed to be able to hear. So the last thing in the world I want is to have high-frequency sound screeching into my ears. Don’t even get me started on how I feel about being in a room with a group of pre-teen little girl voices.

I’ve been participating in Apple Research studies, one of which is Hearing, and so I’ve been more attentive to any changes in my hearing. I don’t know if it’s related to prolonged use of noise cancellation with sealed-in-my ear AirPods Pro, but I’ve noticed in the evenings I’ll hear a faint hissing in my ears. It goes away eventually but I don’t remember it before. Again, I’m paying more close attention, so it might be self-selection and it might be unrelated to noise cancellation, but it did give me pause.

I use to own the 2nd gen non-pro AirPods, but after a few years of being awesome, something went wonky with them. They would intermittently tell me that one AirPod had zero battery, even though they’d been charging overnight. I could sometimes put the recalcitrant AirPod back into the case, and immediately remove it and have it say it was at 100%. Other times it would refuse to correct itself and play any sound. The other problem was that it seemed to switch which AirPod was failing to charge. It wasn’t possible to isolate whether maybe it was the charging case itself that had the problem.

Eventually, I decided that it was the right AirPod, and I attempted to buy a new one. Nowhere on Apple’s site can you buy a single AirPod. You have to go through Apple support, and you have to answer all of their questions after which they will politely inform you that you’re no longer under AppleCare, at which point you politely explain that you pointed that out at the beginning of the call. Only at this juncture will they allow you to give them $89 for one AirPod. You can tell that I followed this path, can’t you? The story has a sad ending. After shelling out the $89 the problems continued.

Rather than to keep buying piece by piece to solve the problem, I gave the three AirPods and their charging case to Lindsay because she had a set with aging batteries and I figured at least the new replacement AirPod would be a help to her. I was sad to see them go, but at least I stopped worrying about fighting with them.

I kept fighting instead with my AirPods Pro. I’d been dreaming about going back to AirPods, and this week when I was too lazy to go get my AirPods Pro to make a call, I decided to use my wired EarPods. Remember those? They’re shaped just like non-pro AirPods. They fit so perfectly and felt fantastic and didn’t fall out of my ears.

It seemed idiotic to spend money on the 2nd gen AirPods when I own the new hotness, which is why I put up with all of these problems for so long. It also might seem idiotic to buy new AirPods when there are rumors of a new model coming out soon. But that’s exactly why I bought them right now. I was worried that this form factor might be going away.

I have a Qi charging pad and a lightning cable sitting side by side where I put my AirPods back in their case, and after using the charging pad for a while, I realized it was actually faster to shove in a Lightning cable than to faff about moving the AirPods case around until the little light started to glow indicating I was getting a charge. When re-buying my 2nd gen AirPods, I opted for the “inexpensive” $159 version.

Steve picked them up for me at our now partially-open Apple Store and when he brought them home, I opened them up next to my phone, and they instantly connected. I forgot how joyful that initial experience is with a new set of AirPods.

I put them in my ears, and it was as though they disappeared. I can hardly feel them in my ears at all. No pinching. No twisting. No waiting. Just instant gratification.

I went for my first walk and run with them in the last couple of days and not once did they fall out. I think I adjusted the left one twice on my run, which compares to maybe 20 times per run with AirPods Pro. I literally forgot they were there. On my walk it was quite blustery and I did notice the wind noise, so I missed the noise cancellation a bit but I’d trade it in a heartbeat for the incredibly comfortable fit of the plain old AirPods.

When I came home, I took them out of my ears and I had no moment of doubt trying to figure out which one was left and right. I’m sure I’ll still mess this up from time to time, but instead of messing it up more often than not, it will become a minor annoyance.

I also forgot how much smaller the original AirPods case is than the Pro case. It’s not a big deal, but it is delightfully smaller, and I’m a fanatic at minimizing what goes in my purse. I carry the tiniest wallet you’ve ever seen – it’s just a piece of leather with slots on either side for cards, and I purposely carry a very small purse too, just to keep me from filling it with huge, heavy things! The smaller AirPods case is a nice touch.

There are a few things I’ll be giving up.

Apple just announced in the keynote at WWDC that they’ll be giving AirPods Pro and AirPods Max Find My support, so you’ll be able to find them even if they’re inside the case. You can even have an alert to let you know if you’re about to leave your AirPods Pro behind. Sadly the AirPods are not on the list of devices to get Find My support.

The traditional AirPods also don’t do Spatial Audio. I don’t listen to music and I don’t watch movies with them, so I don’t think it will be a big loss, and I’ll be happy with my mono spoken-word podcasts. I think there are even more features I’ll be missing that were announced this week but I don’t care, because these headphones stay in my ears which is the most important thing.

I’m so delighted with my new AirPods – it’s kind of like how good it feels when you stop banging your head against a wall. I’m in love with these AirPods, probably even more than I was with my first pair. I’ll be hanging onto the AirPods Pro for the noise cancellation on airplanes, but for all my other headphones needs, I’ll be using my glorious new 2nd gen AirPods.