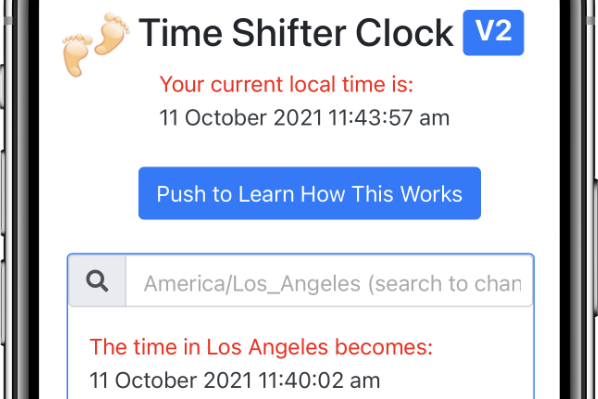 I’ve been working on a major update to my Time Shifter Clock for quite a long time, and it’s finally released and is now available at timeshifterclock.com. I even bought it its own domain name!

If you’re not familiar with my web app, let me tell you the problem it solves.

That’s where Time Shifter Clock comes in. With this web app, you can search for multiple cities, and then shift a slider forward in time as far as a week in half-hour increments. The time will update in each city to reflect the shifted time. When you see the time you like in your own region, you click a copy button to capture the times in each city that you’ve chosen.

Now you can paste that URL into a message to the people with whom you hope to meet. When they open the URL, they will see exactly the times in the different cities you chose. Now let’s say they want to propose a different time. They can simply shift the slider to their preferred time, copy the URL and send it back to you as a counter-proposal.

If you’re not a developer, that’s all you need to know. It’s free and easy to use and I think it solves a real problem. If you find it useful, on iOS you can even add it to your Home Screen so it acts like a native app.

The main advancement in version 2.0 of Time Shifter Clock is you can add as many cities as you want. I have literally not set a limit. The second enhancement is that the URL you’ll be copying is far less messy-looking. It was pretty long with just two cities in version 1.0, and it would have gotten pretty crazy with any more. You’ll still see the names in the URL of each city, but the time conversions all happen through UTC, which simplifies the URL quite a bit.

I had a lot of people poke at this version to test it before release, and Helma from the Netherlands figured out that the original version didn’t account for time zones that were off by a half or quarter-hour. That has been corrected in version 2.0.

There is one constraint of the design that is important to note. This tool uses the standard Moment database for time zones and time zone names. If you don’t find the city you want to use, that means it’s simply not in that standard database and I can’t fix that. I know it’s a bit frustrating to have to figure out the closest city or time zone name, but there’s nothing to be done. The worst example I’ve found is that since all of India is in one time zone (and on the half-hour), the only city in the database for India is Kolkata. Not the capital New Delhi, or even the huge city of Mumbai, only Kolkata. If you can’t find the city you want, the easiest thing to do is search for the time zone name.

There is one opportunity for significant enhancement that I’ve not been able to accomplish, and for that, I’m putting out a call for help. I spent more than a month trying to figure out how to do error checking for the entry of the city names. If you’re a developer, perhaps you can help me fix this.

As of right now, if you type in jibberish for the city name, the web app just sits there and doesn’t do anything at all. Likewise, you can type in a perfectly valid city name that’s in the database, such as “America/Detroit” but if you don’t select the identical name from the dropdown, you won’t actually be looking at the time in Detroit, it will still be the time in the default city. I think it should throw some sort of alert telling the user they have to select from the pull-down (or somehow automatically select it if it’s correct).

Time Shifter Clock is released as open source project on GitHub at github.com/NosillaCast/time-shifter-clock so I really hope the super nerds will jump in and create the error checking that should be in the tool. It’s not for lack of trying on my part, but I just can’t figure out how to do it. The dropdown menu library is where things get tricky.

I built version 1.0 as part of a challenge in Bart Busschots and my Programming By Stealth podcast, and I chose the first two default cities to be Los Angeles and Dublin because I live in LA and Bart lives in Dublin. It’s my app so I scratched my own itch! Version 2.0 is the result of a feature request of Dr. Maryanne Garry who is constantly meeting with people all over the globe at the same time. She lives in New Zealand, so as an homage to her, all additional cities added will have their default city set to Auckland, New Zealand.

I’m very proud of my third web app and I hope you find it as useful as Maryanne and I do.