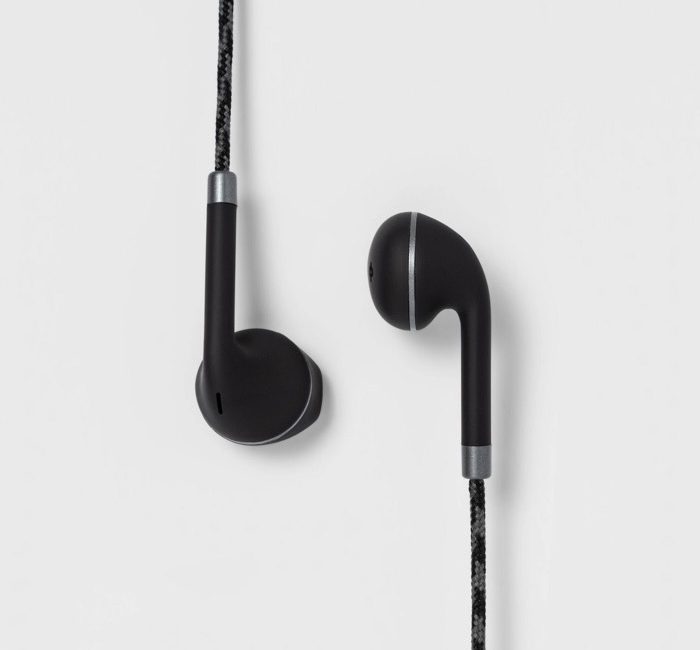 Greetings Captain Allison, and fellow NosillaCastaways, this is quick review of the heyday Wireless Molded Tip Braided Earbuds (In Black Tort or Misty Green at Target. In the grand NosillaCast tradition: What’s the problem to be solved? You want/need wireless headphones, but you’re not ready to plunk down the clams for AirPods.

To set the level of expectations, these earbuds cost the grand amount of $19.99 USD MSRP at Target. These are not going to overwhelm anyone, but they’re also not ‘hawt gahbage’. They use the Bluetooth 5.0 spec, they have a built-in microphone (more on this later), and get eight hours of use time to three hours of charge time. The wire which connects the two earbuds is also wrapped in an attractive nylon fiber which is pleasing to the eye, functional, albeit a little noisy when using the mic.

Since these joined but ‘wireless’ earbuds are on Bluetooth 5.0, listening to music and podcasts is really rather nice. They’re not going to impress your audiophile friends, but they’re clear and have a decent sound stage. While listening to my KPOP station on Pandora the highs weren’t fizzy and the bass was acceptable. When using Apple Music, the audio I had purchased in my library sounded similar.

I am lacking any really bass heavy music on my, very space constrained iPhone, but Cream’s White Room sounded good as did my purchased versions of K/DA Drum Go Dumb, The Jurassic Park Theme, and 30 Seconds to Mars Beautiful Lie.

That all said, while the bass was present it was not very pronounced, more like punchy lower mid-range sounds. Which is kinda what I’d expect, honestly. Over in podcast land-iah the vocals for most voices even the lower registers like Roman Mars were very satisfying. All in all, for the price, you won’t hate these. They are exceedingly adequate.

The buttons and interactions with the phone are similarly ‘solid’ if not almost uninteresting because they “just work”. The connection sound of the earbuds is pleasant without needing to be so overwhelmingly loud that I need to pair them without putting them in my ears.

Now to the weakest point of these headphones, the microphone. Surprising no one the mic is very small. It’s located in the right hand side pod, the other pod appears to be for the battery. As we are fairly well aware, small mics don’t sound great.

This mic is further hampered by the fact that physical movement is pretty readily captured as the joining wire drags across your hair or shirt. The placement of the mic and the controls around it lead to a basic sound that is pretty good. But it’s not impressive or easy to work with.

Audio sample of the headphones connected to an iPhone 7:

So what’s the verdict, do you need to have a set of Bluetooth headphones now and you don’t want to deal with “yet another knock-off company posing as a reputable brand name”? Are you more concerned with playback than phone calls? Perhaps you’re getting them for a younger person, who may not have the best reputation for keeping expensive things? In any of these are true, these may be a good balance of good enough at the right price.