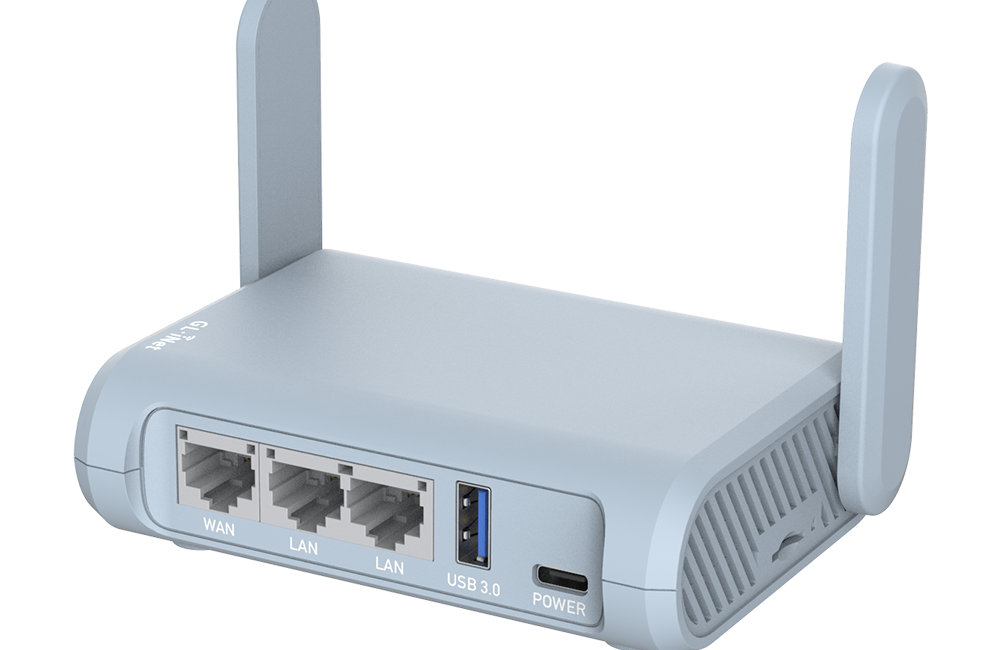 For the past decade or so, when I have traveled, I have always brought along a router for hotel stays. Initially, the rationale for bringing a router along was to avoid per-device charges for internet access.

While, over time, these fees and limitations were discontinued, I have also become more aware of the potential for security threats when connecting to a public/unencrypted WiFi. Thus, I have continued to bring the router along on my travels.

Over the past several years, I have been using the ASUS WL-330N Portable Wireless N Router as my travel router. However, in the past year or so, I have been having trouble with this travel router maintaining a reliable network with the multiple devices I bring along with me, specifically my AppleTV, and streaming a lot of content.

So my problem to be solved is to find a replacement travel router and hence my review.

Enter my new little travel buddy – Beryl (GL-MT1300) from GL.iNet at gl-inet.com/….
According to the box, Beryl is a “pocket-sized” travel router with top-notch security features. While I think that “pocket-sized” may be a bit of a stretch, as it is the size of a deck of playing cards, it is packed with features, including security.

Beryl is a fairly modern-day “a/b/g/n/ac” router (not WiFi 6 though). It comes with OpenWRT firmware pre-installed and allows for custom firmware to be installed as well.

In addition to the typical travel router features of supporting multiple modes to access the internet: router (via ethernet connection), wifi repeater/rebroadcaster, USB modem, and cellular tethering via dongle, there are many other features such as:

On a recent trip over the Thanksgiving holiday that included 4 hotel stays at 3 hotel chains (Holiday Inn Express, Raddison, and Hampton Inn & Suites) I had my first
opportunity to put the Beryl to the test. I am happy to report that the Beryl lives up to all that was promised “on the box”.

I had little problems connecting to the public wifi at each of the hotels (more on that in a bit) and once connected, all of my devices (2 iPhones, 2 Apple Watches, 1 iPad Air2, and 1 AppleTV 4th gen) were able to connect and operate without issue. I was able to use Apple Fitness+ and stream the season finale of Foundation as well as the new Marvel series Hawkeye without any buffering or stuttering.

Additionally, I was able to connect the Beryl to the VPN server that I run from my network at home, so all of the internet traffic was protected from the public WiFi offered by the hotel. I am very happy with this purchase and look forward to using it for years to come.

The Beryl can be purchased on Amazon for around $90 USD and the manufacturer
website is gl-inet.com/…

I’d like to mention a couple of other things about this router. Beryl has a previous version called the Slate. The Slate is still for sale, and it has very good recent reviews. It’s a little less expensive, with a little lesser but still very adequate performance. There appears to be a new version of this router on the horizon, called Opal.

Opal looks to be a lower-cost option with many if not all of the features and performance of the Beryl. The tagline states: “it’s a cost-effective pocket router”. I’m not sure when that’s going to be released, but if you’re not quite in the market for a travel router, you might want to hold back and keep your eyes on that one before making a purchase.

As a bonus, here are a couple of related Tiny Tips when using a travel router:

The Beryl from GL.inet is a great little travel router that I’m very happy with. It allows me to compute happily and “stay secure”.