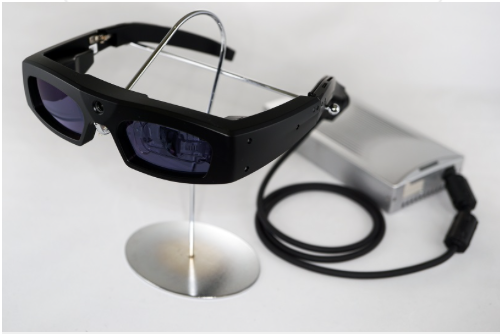 Allison interviews Samuel Presgraves from QD Laser about their assistive eyewear technology. QD Laser’s RETISSA Medical technology uses laser retinal scanning to assist patients with low visual acuity caused by irregular astigmatism, which cannot be sufficiently corrected by conventional glasses and/or contact lenses. RETISSA achieves this by forming an image from a camera and projecting that image directly onto the retina using a wide beam, eye-safe laser. Samuel demonstrates the Retissa technology in two forms. The first device, called RETISSA Super Capture, is mounted on a camera and allows the visually impaired user to see images projected from a modified camera directly into their retina. The second device, called RD2CAM, is a wearable connected to a small electronics box. This device resembles a pair of glasses but instead of normal lenses, one lens is replaced by the RETISSA camera and laser which projects images directly on the wearer’s retina. The setting is the CSUN Assistive Technology Conference show floor at the Marriot in Anaheim, CA.