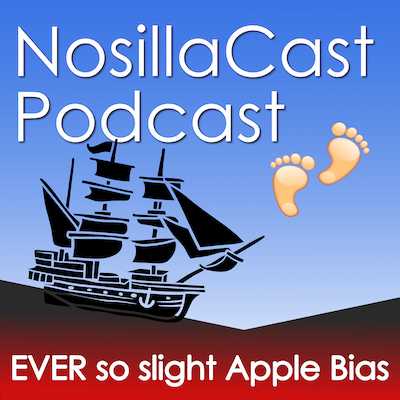 A week ago, I released the NosillaCastAway Shanty, the new “official” shanty of the NosillaCast. Since then, a few people have asked questions about how I made it so I’ll attempt to describe the process.

Problems to be Solved:

Nathan Evans’ Wellerman (Sea Shanty) inspired me to create a NosillaCastAway shanty with the same tune but lyrics tailored to the NosillaCast. Writing the lyrics was just a matter of thinking about phrases that described the creation and evolution of the NosillaCast and then modifying the words to get some rhyming. The site rhymezone.com really came in handy to quickly find words that rhymed with each other.

I knew singing would be the most challenging part of creating this song. Starting with the melody from Evans’ Wellerman, I tried singing the melody in the same key but found it was outside of my very limited range. So I had to bring it down a few notes and change the key to get the song into a range I could sing. Even so, I found I couldn’t quite stay on pitch throughout the song. Later, I found I wanted to add some harmony and maybe a musical instrument to the piece to help flesh it out.

So I had several problems to be solved, here, including:

I quickly realized that I needed a musical software tool to help me accomplish my goal.

I found a software package called Sibelius made by Avid (at avid.com/sibelius) that I ended up using. It has a free 30-day trial period which was perfect for me. The cost to purchase Sibelius is $99/year or $13/month. It has 3 key features that satisfied my needs:

It’s a much more full-featured tool than I needed so I just stayed with the features that I needed.

Composing the score was a bit of a hunt-and-peck, iterative process for me. In Sibelius, I could place a note on the treble clef staff and it would actually play the note for me. I chose an oboe as the instrument to play the melody. I sang the first note of the song in the pitch of the range in which I was comfortable singing and found the matching note in Sibelius. Once I had a starting point, I could add notes going up and down the scale, kind of humming along to guide my guesses. As I added more notes and adjusted them to sound right, I could start playing them back to hear the melody.

This took a significant amount of trial and error and was the most time-consuming part of the project, by far.

Once I had the verse and chorus composed, I exported the oboe tracks and used them as a reference to help me stay (mostly) on pitch as I sang. It was a big improvement over singing acapella but you’ll notice several notes still don’t sound quite right.

I really like the harmony sung during the chorus of Wellerman but I knew I couldn’t sing it. So I decided to create a score for the harmony part and, instead of having it played by an instrument, play it as a background bass vocal which Sibelius can synthesize.

Creating the harmony score was quite a challenge for me since harmony does not come naturally to me. I listened to a couple of versions of Wellerman harmony parts but they were done in different keys so I did my best at transposing those harmonies to the key of my shanty.

My final check was to play each melody and harmony note together to make sure they sounded like a chord and not dissonant.

I used GarageBand to capture all the vocals and instruments. I imported the oboe and bass vocal aiff files created by Sibelius into GarageBand. For my singing, I tried using Autotune (called Pitch Correction in GarageBand) to help my pitch problems but it gave some weird effects that I didn’t like so I abandoned that whole path. Instead, I sang and recorded two tracks each for the verse and chorus parts and laid the tracks on top of each other, which helped somewhat.

I also wanted to add a beat as Nathan Evans uses in the Wellerman. He strikes the backside of an acoustic guitar to the beat but I don’t have a guitar. The closest I could find was a plastic recycling bin that I turned upside down. I put my mic under the cavity and recorded while I struck the bottom of the bin to the beat.

Finally, inspired by Nathan Evans’ Wellerman, I wanted a good strong “Huh!” at the end of each verse for emphasis. For that I just recorded myself grunting “Huh!” four times and laid all four tracks on top of each other so it sounded like a group of people all saying “Huh!” at the same time.

With all of the singing, oboe, bass vocal, bin beat, and grunt parts, I ended up using a total of 11 tracks in GarageBand.

I thought this adventure might take a day or two but I ended up spending close to two weeks to produce the NosillaCastAway shanty! It ended up taking longer partially because I wanted this song to be a surprise for Allison so I had to wait for times when she was away to sing and record my parts. In the throes of attempting to create the song and failing miserably, a fleeting thought came to mind: That is how well NosillaCastaway Shai Yammannee would have performed the song. I’m sure he would’ve recorded the song had I asked, but I decided I didn’t want to impose.

In the end, I was pretty happy with how the song turned out and the reception has been pretty good. After the challenges I had, my respect for people who can compose, play instruments, and sing well has grown substantially. I can confirm I am not a singer and I will be keeping my day job – retirement.

1 thought on “Making the NosillaCastAway Shanty”