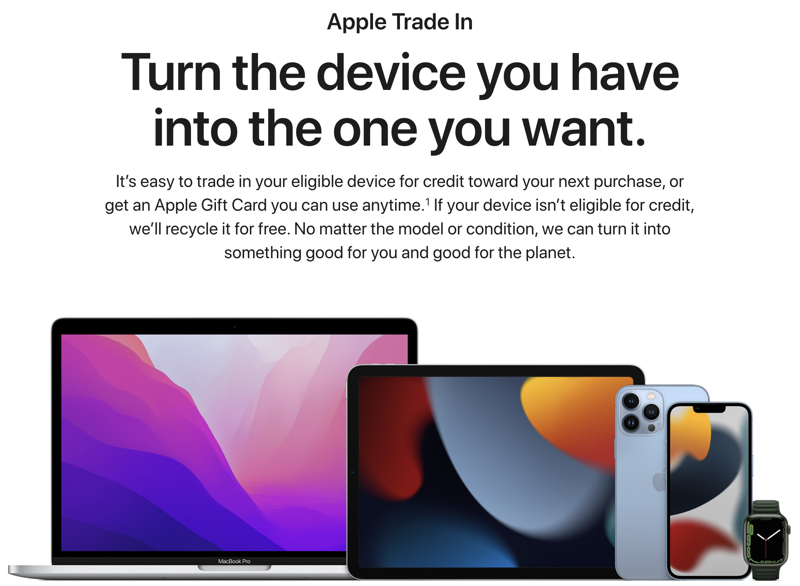 How Much are My Devices Worth?

If you’ve bought an Apple product in the past couple of years, you’ve probably noticed that they have the option to trade in an old device to offset the cost of your new machine. I had noticed it when it was first introduced as an option but didn’t take advantage of it until very recently.

As Mac users, we all know that our devices hold their value for a long time. It’s not uncommon to have a non-Apple friend ask, “I think I want to try the Mac. Do you know where I can find a good, cheap used Mac?” And the answer is always, “Nope.” While you can find a good, used Mac, it won’t be cheap.

It’s not an invalid question, it’s a matter of perspective. The purchase price for a new Mac can be significantly higher than for a comparable PC. What is not commonly realized amongst PC buyers is that this significant price difference is maintained when you’re ready to sell your computer. Understanding this offset is important when making a purchasing decision.

Let’s walk through an example. Let’s price out one of my most recent Macs, a 2019 16” MacBook Pro 2.4 GHz i9, with 32GB RAM and a 2TB SSD. The way I figure out what a device is worth on the open market is to do a search for the exact model on eBay. The trick is to figure out what the equivalent product has actually sold for. Don’t look at the asking price, or even the “Buy it Now” price. Instead, after doing a search, look on the left sidebar down towards the bottom and you’ll see a section entitled “Show Only” and from that list choose Sold items. This way you know that the device actually sold for that price, not some person’s wishful thinking of what their product was worth.

The Dell machine is selling for a full third less than the Mac. I’m sure there was a huge price difference in the original selling price of them when they were new, and maybe it was even that big of a gap. I’m doing this comparison only to demonstrate that the cost difference is maintained, or even widened on resale.

If you’re willing to put yourself through the aggravation of selling your devices yourself, you go girl. You will most likely get more for them than by trading them into Apple. I’ve sold my Macs and iPhones on the open market before and here’s the “simple” process I used to follow.

I start by pulling a dozen or so actual prices sold for equivalent devices on eBay. I look at the photos, see if each sale I found was by an individual or a company, and toss out the company ones because they always skew high. I also throw out any results I get if something is broken or the seller is really unskilled at photographing the device to make it look good. Then I average the results and that’s the price I try to get.

I painstakingly clean and set up my device on my dining room table, moving distracting things out of the way, getting the lighting just so, and putting the original packaging next to it so it looks brand new. This process takes hours.

In the end, I never get that average price I found on eBay. Invariably one of my friends or someone who really can’t afford the true price wants the device and I drop the cost. I suppose I could be tougher on this but it invariably happens after I’ve been trying to sell something for weeks so it’s pretty easy to talk me down in price.

The result is that I do a lot of work, I have a lot of aggravation, and in the end, I’m always sad because I didn’t get what I thought it was worth. We’re all delusional about what we think our devices are worth, even if we do all the research I described above.

And that’s why this article is actually about the happiness and joy that is the Apple trade-in experience. No taking photos. No figuring out where to list it. No answering emails from people offering you half price. No lowering the price because it’s a friend who wants to buy it. You click the trade-in button, answer a few questions about the device’s make and model and whether it’s functional or not, and Apple offers you a price.

If you like the price, when you place your order they ship you an empty box, you stick the device in the box and give it to the delivery service Apple have specified for you. When Apple receives your device, if it’s as you described it, they’ll credit you the money. As hassle-free as it possibly could be.

Now, what about the price Apple offers you? Do you get what it’s worth? Well, that’s actually hard to answer definitively. I don’t have a lot of data points to validate this, but in my small sample set of evidence, it varies quite a bit. Let’s go through a few examples.

I checked eBay prices, and the average of five equivalent models sold this year, the value would have been $1312. He got roughly half of what it was worth on the open market. But remember, I have never gotten what it was worth on eBay. In reality, this is probably more like a 25% difference in what he could have gotten. And don’t forget, if you sell through eBay you have to pay to ship an iMac so that would have cut down that net price quite a bit.

But guess what? Ron got $685 for his trade-in! He actually got 18% more on his trade-in than he could have maybe gotten on eBay. That is astonishing.

Probably the most surprising example I found was when I helped my friend Nancy buy a new 16” M1 MacBook Pro. She keeps her Macs a very long time, so I wasn’t optimistic when I suggested she check to see what Apple would give her in trade-in value for her old Mac. You see, she had a 7-year-old laptop. It was a 2.3GHz i7 15” MacBook Pro with 16GB of RAM and a 512GB SSD.

Ready for it? Apple gave her $310 for it! I was positively shocked. I didn’t even run the numbers on eBay for this one because $310 seems more than fair.

With those three data points I’m not sure we can come to a conclusion on how to know whether you’ll get a good deal from Apple on a trade-in. But I do know that in all three cases, all these people had to do to get paid was poke a button on the website and then put the Mac in a pre-labeled box and drop it off at UPS.

I said that doing a trade-in is hassle-free, but I’m going to add an amendment clause to that. It’s hassle-free as long as Apple waits to send you the return box so that you have time to set up the new device before sending back the old one. In Steve’s case, he bought the Mac Studio and a Studio Display to go with it. He received the return box for the iMac first, then the Mac Studio, but the Studio Display took another couple of weeks to arrive.

The problem is that Apple only gives you 14 days to return the trade-in, but he didn’t have a monitor yet so he couldn’t do that. Technically, we do have spare monitors around the house, but he shouldn’t have to rely on that. When time was running short on sending the box back, I suggested he call Apple and ask for an extension. It seems like a completely reasonable request.

He spent 20 minutes trying to convince the first person at Apple to let him delay the return, then escalated to a senior advisor who wasted another 20 minutes of his time before begrudgingly saying yes. But it gets worse.

Apple prides itself on how environmentally conscious they are, right? The only way to extend the return time is for Apple to send you a whole new box! An iMac doesn’t require a tiny box though, right? The box for an iMac is gigantic. They paid to have trees cut down, turn into cardboard, get folded into a box shape, have a label created, and then used trucks burning dead dinosaurs to drive a second 9-pound box to our house. All this instead of just emailing him a PDF of a new label.

It was so absurd that I had Steve take a photo of me standing next to the two boxes stacked on top of each other so I can send it to Apple with a gentle letter suggesting they could maybe do better.

The bottom line is that as long as you get the return box in time, the Apple Trade-In program is hassle-free with that one caveat, and is usually a pretty good deal. Not only have we gotten significant money for our older products, we have no hesitation in doing it. In the old days, I would say I was going to sell a product and then never get around to it. My drawers are filled with old devices I really meant to sell. I hope this encourages some of you to dig through your old equipment, especially older Macs, and give the Apple Trade-In program a try. And remember, if you’re not buying something right now, you can an Apple Gift Card to use at any time.

Check out the Apple Trade-In Program at apple.com/…

4 thoughts on “Is Apple’s Trade-In Program Program Any Good?”