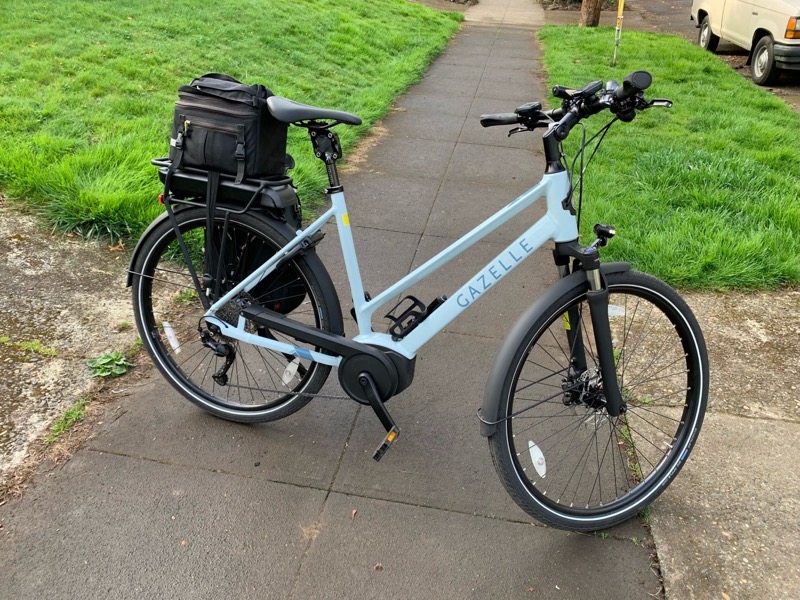 In Kenneth Grahame’s 1908 children’s classic, “The Wind in the Willows,” the rich and easily distracted Toad is out with a few friends in his shiny new horse-drawn caravan, when suddenly they’re overtaken by a rude driver driving what was then the new technology of the day – a motorcar – causing the caravan to wreck, and leaving Toad to stare wistfully at the rapidly receding motorcar, murmuring “Toot toot” to himself as he dreams of acquiring the new technology.

I couldn’t help but think of that scene the first time I was overtaken by someone on an electrically assisted bicycle: there I was, pedaling along at a respectable 14 miles an hour, when a woman on an e-bike with bug antennae sticking out of her helmet overtook me at a furious clip, apparently without effort! Toot, toot, indeed. Unlike Toad I didn’t crash, and I did not immediately rush out to purchase the magical new conveyance, but I did start researching what might be the right e-bike for me.

When I first started thinking about getting an e-bike my primary goal was to reduce my 75 minute commute time on my 13-mile journey to work. I carry a lot of stuff, part of the route involves a long, steep uphill segment across a bridge, and there are often headwinds – both going to work and coming home! So the problem to be solved is how to choose an e-bike that would reduce my commute time and make the journey less onerous at a cost that didn’t break the bank.

E-bikes come in two main classes, class 1 and class 3. In the U.S. class 1 bikes offer assistance up to 20 miles per hour, while class 3 bikes will assist you up to 28 miles per hour. As you might expect, class 3 bikes cost significantly more, adding about $1000 to the price of the more established bicycle lines. I chose a class 1 bike, partly to save money, but also because I felt that there was increased risk from car drivers who might be surprised at how quickly a class 3 bicycle would approach them.

Most of the modern e-bikes use a bottom bracket motor built into the frame. The primary advantage of this is that it allows the system to directly sense the torque that you’re applying via the pedals, and add to that torque with the motor: when you’re pedaling lightly, the motor adds a small amount of torque, and when you’re pedaling strongly the motor adds more torque. A friend of mine, who was the first person I knew personally to buy an e-bike, refers to this as “God mode:” the system seamlessly multiplies your effort to make it seem like you have god-like strength.

The competing drive technology is a hub motor built into the back wheel. This was used on early e-bikes, and is still used on cheaper e-bikes today. With most hub motor based systems it is more like you choose a set amount of power from the motor via a twist grip, and your legs add on to that at whatever effort level you choose.

A few hub motors estimate torque from other inputs like speed and crank position, but the effect is non-linear and not quite as natural as the bottom bracket motor technology. Hub motors also have the reputation of being less able to supply propulsion at high speeds, since the motor comes after the gearing; some newer hub motors have internal gearing to make up for that shortcoming. I chose a bottom bracket motor because I wanted the better riding experience.

An e-bike motor and battery add significant weight to a bicycle, around 12 to 15 pounds minimum. This makes it a little nonsensical to put them on frames that are minimalist, as most regular non-assisted bikes strive for the lightest and most graceful designs. Consequently, many e-bike manufacturers have gone to the other extreme and taken to styling their bikes like motorcycles, with chunky frames and wide, wide tires. After a lifetime of riding lightweight, graceful bikes I just couldn’t see myself astride one of the motorcycle wanna-be’s, so I chose a bicycle design based on the Dutch ethos: sturdy and practical, but undeniably a bicycle.

The mail-order versus in-store purchase decision is an interesting choice to make, especially in the e-bike market. You can definitely get more bang for your buck with the mail-order purchase, but you’re spending a considerable sum of money on something that you don’t get to see or try out first. You can find excellent reviews and a user forum at a site called Electric Bike Review, but an in-store purchase is still the lower risk path; in person you can try out a range of e-bikes to find the right one for you, and you’re guaranteed to be working with a shop that can service your e-bike properly for the long term. It also allows you to connect the paper specifications with some real-world riding experience. This turned out to the most important part of my bike selection process, so I’m going to go into more detail about that here.

Earlier I mentioned that I chose a class 1 bike, limited to 20 mile per hour assistance (you can actually go faster, on downhills and such, but it only assists you up to 20 miles per hour). I decided that I wanted an e-bike that would allow me to travel somewhere near that upper limit most of the time, without draining the battery too much or making me too tired.

Here I have to take a little detour to explain that most e-bikes offer different levels of torque assistance, selectable via push buttons on the handlebars. Higher levels of torque multiplication translate into greater propulsion and decreased range and vice versa. Most e-bikes offer at least three levels of assistance: an Eco mode, a Touring mode, and a Sport mode. The place where real-world experience on the e-bike comes into play is because you can’t assume that Eco mode experience is the same on two different e-bikes: the torque limits (and associated ranges) are usually different on different models. More confusing yet, you can have an e-bike where the Eco mode supplies more torque yet still has a longer range due to a larger battery or more efficient drive system.

In my decision process I started with the lowest model e-bike from Gazelle, a Dutch supplier of e-bikes sold in-store at specialty bicycle shops, and tested each of them to see what price would I have to pay to get an e-bike with enough “oomph” in Eco mode to allow me to sustain 18 miles per hour indefinitely (or at least with the effort I was used to expending). With a test ride, I found that their lowest spec bike, the Gazelle Medeo T9 City model, didn’t offer enough torque in Eco mode; I found that I had to increase assistance to Tour mode to maintain 18 miles per hour. Riding in Tour mode on this cheapest bicycle would have dropped the range from 65 miles in Eco mode down to 35 miles in Tour mode, an unacceptable trade-off.

Going to the next model up, the Gazelle T9 Medeo (standard) the torque limit in Eco mode was increased from 30 newton-meters to 35 newton-meters. That 17% increase in Eco mode torque was enough to allow me to meet my 18 mile per hour goal on flat ground. This was a case where the Tour mode torque of the City model was coincidentally equal to Eco mode torque of the standard model, with nearly double the range due to staying in Eco mode! So the T9 Medeo standard model met my requirements nicely, with a theoretical Eco-mode range of 60 miles that was a little more than double the round-trip distance of my commute.

Having this margin of safety in range is important because the battery may not offer as much energy in cold weather, and sometimes I might need to use Tour mode for most of the ride due to headwinds. Incidentally, I have found the estimated battery range to be pretty accurate overall, though you can be fooled by the range number updated continuously on the handlebar display; this instantaneous forecast is a function of battery charge, assistance level, and the recent power output history. Sometimes after going up a hill you will see the forecasted range actually go UP as you pedal along at lower power output!

You might be wondering about the next model up in price, the Gazelle Medeo T10. The T10 has one more gear range on the derailleur (10 versus 9), a motor that offers greater torque multiplication in each mode, a battery mounted lower on the frame, and a price $500 greater. I had already found out from my test rides that I was only using the top five gears of the 9-speed cassette on the T9, so adding a tenth gear in the middle was of no benefit. The greater torque multiplication in Eco mode might have kept me out of Tour mode on small hills, but my route is mostly flat with one big hill that was going to require Tour mode regardless. The lower center of gravity with the battery might have been nice, but not $500 nicer.

From there the e-bike features (and costs) can go up ridiculously. The top-of-the-line Gazelle e-bike has continuously variable gearing in a sealed rear hub, a carbon fiber belt drive, and class 3 speed; it costs nearly $5000 dollars. While the carbon fiber belt drive and sealed hub gearing are said to be more weather-proof and lower maintenance, I didn’t think that they justified the much higher price for me. One wonderful feature that all of the Gazelle bikes have, even on the lower-priced models, is hydraulic disc brakes; once you use them in the rain you’ll never go back to rim brakes!

At this point, you might be wondering how much I was able to reduce my commute time. Although I was able to raise my cruising speed from 14 miles per hour to over 18 (an increase of about 30%), the stoplights and other traffic controls mean that my overall commute time only went down about 20% (from 75 minutes to under 60).

The good news is that I think I hit the sweet spot of price and performance; I could have paid hundreds or even thousands more, and probably not made much of a difference in commute time or enjoyment. I realize that I haven’t said much about how it feels to ride my e-bike, but the best way that I can think to express it is like this: riding the fully loaded e-bike uphill and against the wind, I can feel just as swift and agile as when I’m on my minimalist racing bike on flat ground. Or even swifter and more agile if I feel like pushing a button.