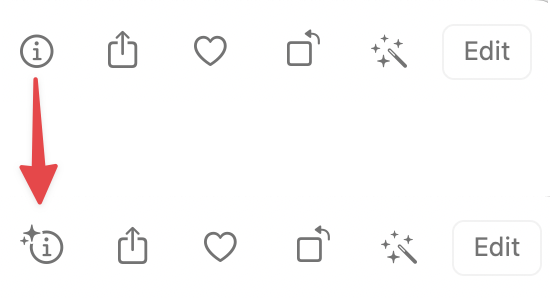 This is Bruce from East Tennessee with a tip about the visual lookup that exists in the macOS Photos app. While I didn’t know about it at the time, Allison spoke about this same capability back in October of 2021 in her iOS 15 – These are a Few of My Favorite Things post.

Apparently, I don’t listen as carefully to everything Allison says as I think I do. But, she was talking about Photos on iOS, so I may have kind of tuned out. Or there’s just too much to remember. After all, how many times has Allison found out that the answer to a current question is a blog post she wrote a while back?

The Problem to be Solved in this case is that my wife and I saw an interesting plant in a botanical garden while we were on vacation. It wasn’t labeled, and we were interested in what the plant was, as my wife was interested to know if it would work in our garden.

We were at the Kew Royal Botanic Gardens, on the west side of London, England, so a) not being able to find any label around any of the instances of that plant was a bit unusual and b) it’s a very open question whether something growing near London will or should grow in East Tennessee. After all, as a friend pointed out, I do live at the same latitude as north Africa.

And, just because a thing can grow someplace doesn’t mean it should be planted there. Kudzu, as just one horrible example, grows quite well in this climate.

As we were reviewing pictures on my Mac, we came to the ones I’d taken of this particular plant. I had the info pane open, and this particular picture had a little bitty icon in the middle of it – sort of like a leaf if your eyesight is good. My wife asked what that icon was, and my response was that I didn’t know, and it was sometimes there and sometimes not.

This time, I got a window telling me that Photos thinks the plant is from the genus Echium. With that information and a bit more searching, I’m now about 98% confident that this plant is Echium pininana, aka Tower of Jewels.

It’s definitely not native to East Tennessee, coming originally from the Canary Islands. So, I know enough to be able to do the research for whether this non-native plant is something I can consider, as well as look for other plants in this genus.

If I turn on the Info Pane, now I can see the Visual Lookup icon showing up, right there in the middle of the photo.

And, clicking that icon shows me what Apple Photos thinks is relevant for this photo.

Doing a bit of digging into this and experimenting, I found out that this feature came in with iOS 15, as discussed in Allison’s article, and with macOS Monterey, as discussed in this Apple Support Article.

This post was written well in advance of the passing of the Queen. No disrespect is intended.

AIn my experimentation, I find that plant and animal identification is useful, but sometimes off. It has been enough, however, to get me to the right answer. So, I would consider the results a useful starting point, but not anything authoritative. I’ve also experimented with this for some other images, and those results have been less satisfactory. If, for example, I had a photo of a well-known painting, I suspect that the results would be more relevant.

As one example, the Visual Lookup icon shows up for this photo I took of a Her Majesty Queen Elizabeth II edition of Monopoly.

But, Photos doesn’t find any information for this:

Now, that’s not an entirely bad thing, when considered from a privacy perspective. My interpretation is that Apple Photos is running an algorithm locally to predict whether or not it can find additional information for this image.

Unfortunately, sometimes whatever Photos is using for a search comes up with some “interesting” answers. One of the things I often do when I’m visiting places is to take pictures of the informational plaques so I can read them more carefully later and look up more information. Photos thinks it might be able to find more information about this informational poster from Linlithgow, Scotland:

But it turns up information about a completely unrelated book for sale. So, not so useful in this particular case.

So, your mileage may vary in terms of whether this is useful to you. The key thing to know from a macOS standpoint is that you’ll only see the indicators for when Photos thinks it might have additional useful information on a photo if you have the Info Pane showing.